Not much really old stained glass survives in the Touraine (and very little in situ). This area has been a battleground for too much of its history. The Protestant iconoclasts in the 16th century Wars of Religion did much of the damage, but the Revolution in the late 18th century, the Prussian War in the 19th century and the Second World War in the 20th can all take their share of the blame. Almost all of the stained glass you will see now is 19th century, and some of the surviving older glass has been moved from its original surrounds. 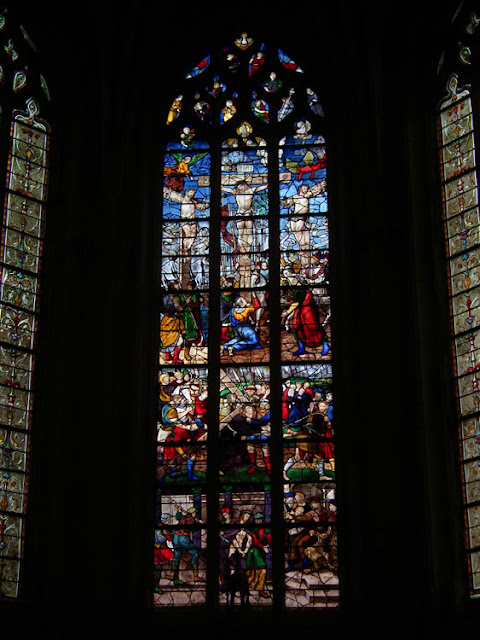 The church in the lovely village of Montrésor is one of only half a dozen that I know of which retains some of its medieval or renaissance glass. It was commissioned by Imbert de Bastarnay (grandfather of Diane de Poitiers) and built between 1519 and 1541 in the gothic style. The window over the altar is a rare survival from that time, and depicts the Passion and the Crucifixion. At the other end of the church the gable above the entrance was opened up in the 19th century to take some very beautiful renaissance era windows that were formerly part of the choir screen (not shown here). The colours in both sets of windows are rich, intense and jewel like, far less flat than their 19th century counterparts. They are truly striking windows, and doubly so because of their rarity. 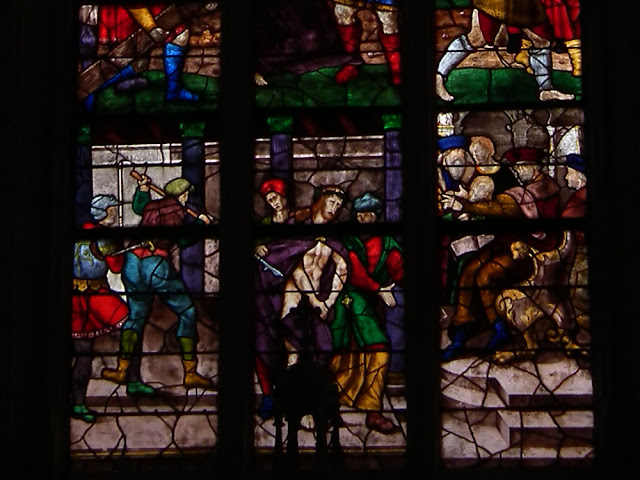 Considered a very fine example of a Renaissance building, the church is open every day. 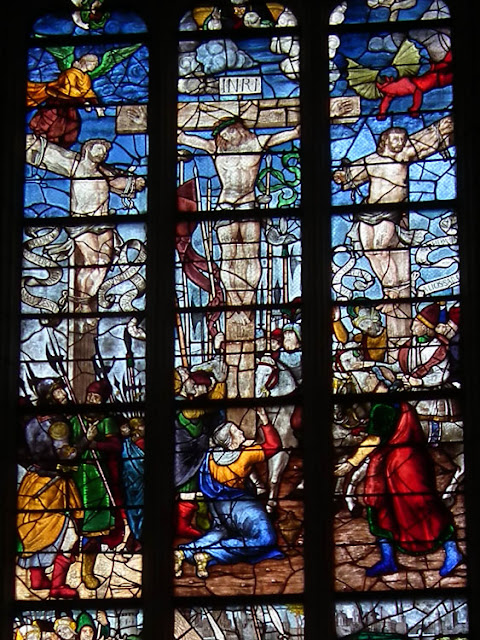 Our medieval historian friends Niall and Antoinette have written more fully and more knowledgeably about the church here.
Posted by Susan at 09:00

Email ThisBlogThis!Share to TwitterShare to FacebookShare to Pinterest
Labels: Churches, Montrésor, Towns and Villages near Preuilly

Fantastic colours. What a story the windows tell.

Much more detailed than some of the later glass. We will have to put it on the ever growing list to visit...

I just love the wee red devil and obviously one of the glaziers had a thing about bright blue boots :-)

Last year during the Journées du Patrimoine we came across the Sainte Chapelle de Champigny-sur-Veude. It's quite close to Richlieu and has wonderful stained glass windows. During the revolution all the glass was taken down and buried, so it remains quite well preserved.

Antoinette: yes, there is clearly some sort of blue boot theme going on :-) And the devil is straight out of a comic book!

Keir: You lucky things! I know about the glass in the Chapelle at Champigny-sur-Veude, but have never managed to get inside to see it.