Le Relais du Dolmen is the latest incarnation of the restaurant in Charnizay. When we first bought our house, the restaurant was called Le Gargantua and was a lunch stop of très bon rapport de prix et qualité. Then the lease was sold to someone else, who lasted a couple of years, but didn't really impress the locals. Earlier this year the place abruptly closed. It looked like it had been abandoned, but in the autumn the decorators moved in. Now it has re-opened, with a new name, and a young local woman at the helm. 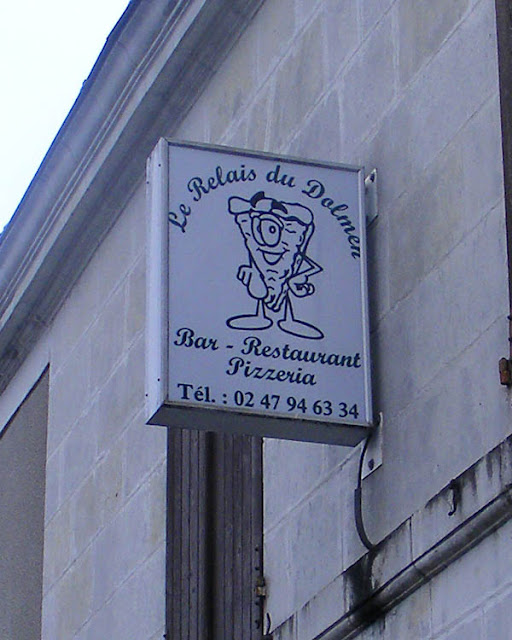 Antoinette, who writes Chez Charnizay, thought she should try the place out and invited us and mutual friends Tim and Pauline along to lunch on Friday. We also thought it would be a good idea to try it out and accepted with alacrity.

The meal was a simple, 12€ no choice set menu of paté en croute, chile con carne with salad, cheese, apple and banana cinnamon crumble or moeulleux de chocolat with creme anglaise for dessert and wine. Coffee was extra. 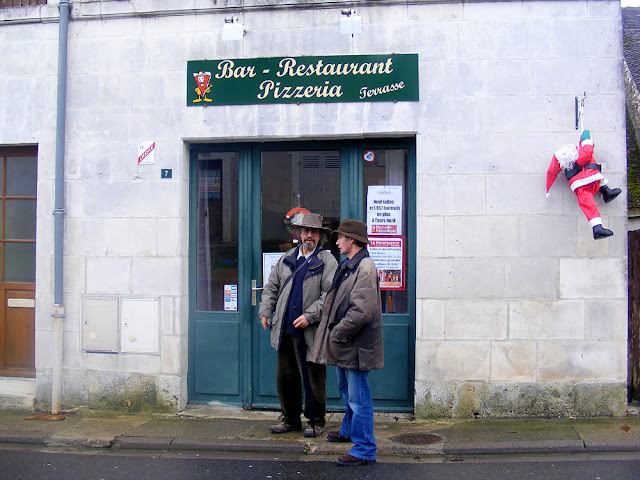 Tim and Niall outside the bar.

The young woman was managing the kitchen, the tables (3 occupied and a total of 11 customers including us) and the bar all on her own. As a result our bread, water and wine were a long time coming, and she clearly needs an assistant. She asked us if chile con carne was OK for mains and assured us it wasn't very spicy. Someone on the next table opted not to have it, and was given something that appeared to be mostly mashed potato (maybe brandade de morue?). 'Not very spicy' turned out to be a considerable overstatement. I think it had been shown a chili in the kitchen, but that none actually came in contact with the carne. It was a perfectly pleasant and satisfying mince and beans dish though, served in big square bowls so you could help yourself.

The cheese platter was a simple offering of camembert and Sainte-Maure-de-Touraine. I thought the camembert was particularly tasty. The crumble was pronounced very good by those that had it, and my moeulleux was good too. The red table wine was soft and black curranty and very drinkable. It went perfectly with the carne sans chilli. A coffee rounded things off nicely.

The restaurant has stiff competition from restaurants serving similarly priced meals at lunchtime in the villages less than 10 minutes either side of Charnizay, so she may struggle to match them for quality. However, it seems a nice place to drop into every now and then, and definitely worth patronising on the grounds that if you don't use it you will lose it.  If you want a quick simple meal, the food isn't bad and I am sure the restaurant will evolve and develop as the new manager gains experience. Or you could just drop into the bar at other times for a coffee, beer or a snifter. I imagine it could be quite convivial. 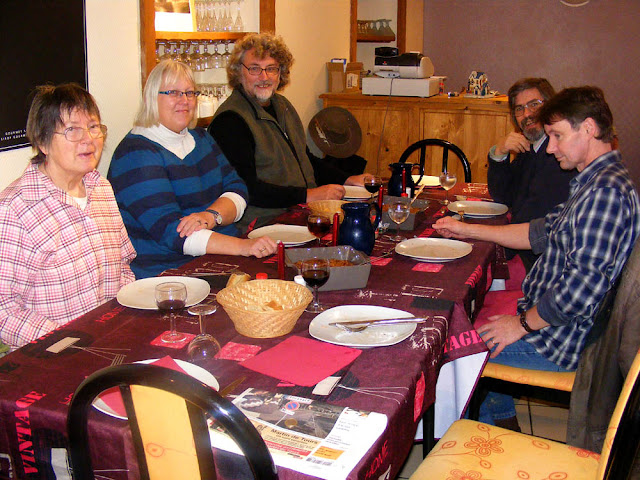 We hope that the enterprise goes well and that the summer brings a boost in passing traffic. And as a place to be when the world ended it was perfectly adequate.

PS: We thought that next year we might organise a Touraine Bloggers office Christmas party, with a Secret Santa (€5 limit) gift exchange, maybe in Loches. Hands up all those who would be interested?

Email ThisBlogThis!Share to TwitterShare to FacebookShare to Pinterest
Labels: Food and Drink, Towns and Villages near Preuilly

Office party...You're on! But make sure there are no photocopiers in a side room... people tend to do silly things when they see one!!

The bar had four people in it as well as I was hanging around trying to pay for the paper... I thought the food was good... well worth supporting.

And how about a mid-Summer party... with a secret Sungod gift... must be something edible?

Tim, looks like I will have to get the Druids gear out of hock again. I am sure we would be up on both counts.

The Le Relais du Dolmen must be OK they have a hanging Santa. How long will it stay up. Bets on a postcard please...

On a more serious note the menu did not look in any way Gluten Free which is always a problem with these places.

Tim: OK -- but you will have to organise the summer party.

C&E: We took my coeliac b-i-l to the original Gargantua, also a no choice menu, and they handled it perfectly well -- we were really impressed and John survived with no ill effects, so they had taken it seriously and understood. My guess is that it would just be a matter of letting her know (maybe the day before in this case) but I agree, a first visit would have to be a leap of faith.

The poor chili must have felt very left out, sat all alone in that kitchen ;-)

On a serious note though we will definitely be dropping in for lunch every now and then. As you say use it or lose it.

And give the pizza a try!

If by any chance we are chez nous next Christmas, count us in for that office party !!
And we will definitely eat here. For the same reason we eat regularly at Grandma's in LGP - it's there and we need to make sure it stays there.

btw 28th of December falls on a Friday or Saturday 29th for the Marché aux truffes.

Jean: exactly, and hope you can make it to the office party.

Beaver: aaargh! there are a series of these truffle markets and some are on Fridays and some on Saturdays. I got myself thoroughly confused -- corrected now. Thanks for pointing it out. And bonnes fêtes, btw :-)