To shamelessly quote Wikipedia (in translation): 'The Tree of Secularism is a tree planted to commemorate the Law of 9 December 1905 separating the Churches and the State in France and for promoting the notion of secularism. It is inspired by the Tree of Liberty.' 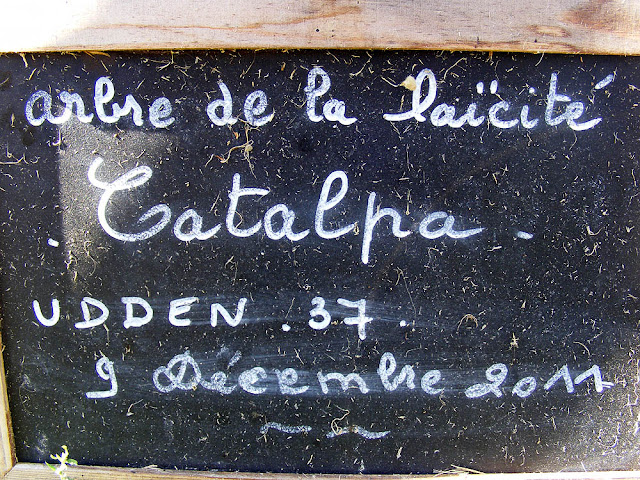 Secularism is sometimes described as the 4th pillar of the French Republic (along with Liberty, Equality and Fraternity). Last year many communes, encouraged by a national human rights organisation dedicated to the idea of a secular society, planted a symbolic tree. Many, like Preuilly, chose to position the tree close to the State Primary School.


The tree is planted in the middle of the Champ de foire. 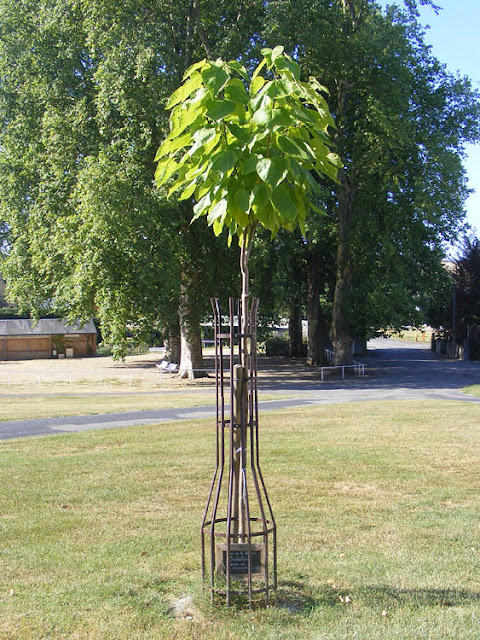 This secular republicanism is part of France's determination that each person should be free to exercise their own conscience in public affairs, and not be obliged to follow a dogmatic religious line. La laïcité does not preclude people from holding a religious belief in private, but it insists that religion has no place in public life. It promotes education as a means of achieving the more well known tenets of the Republic - Liberty, Equality and Fraternity. Without education and a secular environment democracy is worthless. The aim of la laïcité is to support the functioning of democracy for the general interest (at the expense of the individual interest if necessary).

Email ThisBlogThis!Share to TwitterShare to FacebookShare to Pinterest
Labels: Memorials, Pictures of Preuilly

The Staffette says...
Well, at least something is going to be large enough to play boules under when the Limes die.
But they'll have to do something about that slope beforehand!

Hi Susan,
I couldn’t agree more with you. The law about separation of Church and State is the best ever voted on. It freed people from the shackles of religion and banned bigotry and mythology from the public discourse. I wish my American fellow citizens would see the light and vote on a similar law. Then the US would be really free and truly the leader of the free world they so freely brag about. One can dream, can’t one?

Well written CHM! As I was reading, I kept on thinking "that is the exact reverse in the US".

Thank you Nadège and it's ironic the Preuilly people chose for their Tree of Liberty a native to the Southern United States where religion strangles and chokes any attempt at real freedom of conscience.

It is the Egyptians that need to consider the merits of Laïcité, n'est-ce pas?

chm: I'd be surprised if anyone registered the irony at this end.

H (as I assume it's you): yes, any state that includes religion as part of politics is worrying for it's citizens.