This banner has recently gone up on the side of the road into Preuilly. The landholders are our local organic orchardists and market gardeners, and the issue is the plan for a big new airport near Nantes. Their banner says 'Supporting the country folk of Notre-Dame-des-Landes'.

In support of the fight against the airport project at Notre-Dame-des-Landes, a new group has been created in the Loches area, to lobby against what they have dubbed 'Big Pointless Projects' (les grands projets inutiles). 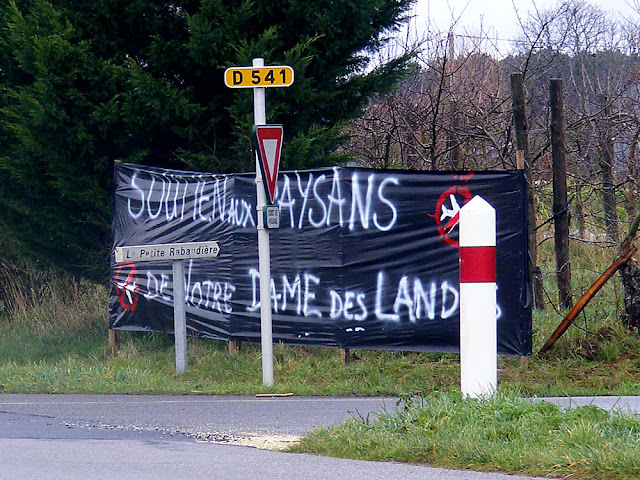 The idea to construct a airport at Notre-Dame-des-Landes (30km north of Nantes in Loire-Atlantique) dates from 1965. Originally the idea was to create an airport suitable for Concorde. But the plan wasn't scrapped when Concorde stopped flying and ever since, the protests against this largescale project (€561M) have continued to grow -- even more so in the last few weeks, as work is finally expected to begin in 2013 to put in place the infrastructure envisaged for 2017.

On the site, a group known as the 'zadistes'* occupies the area, encircled by tractors to protect themselves against intervention from the police. All over France support groups are proliferating. Many of the individuals involved are farmers or rural residents. In Loches, they are not only concerned about the airport, but even closer to home, the future of the grand 19th century Palais de justice (courthouse) in Loches, the sous-préfectural (county services) office move and the closure of Alfred de Vigny school, a lovely old building in the centre of town.

The protesters point out that the airport project will seal under concrete an area the size (2000 ha) of an average commune (local authority) in the southern Touraine, and that this land is prime agricultural land. Protests on the site have been fairly roughly dealt with by the CRS** ('violence insupportable en démocratie') and the cost of police action (€1.5M) considered unjustifiable in these straitened times.

The protesters' website is here (in French, but well worth looking at for the maps showing the scale of the project even if you don't read French).

*ZAD = Zone à Défendre. They take their name from a twist on the project's own ZAD acronym (= Zone d'Aménagement différé). In other words, rather than a Deferred Development Zone, the protesters have created a Defended Zone.
**Compagnies Républicaines de Sécurité = the specialist riot and crowd control squads of the police force.

I have signed the petition... have you? Always well worth doing!!

Another totally ridiculous waste of money and land... it will however have loads of support from investment 'ankers [supply your own first letter there] and other "grosses chats"... it will probably be called Paris-Nantes!!

I was glad to see protest banners in my area when I was there before Christmas...and when a local politician invited Ayrault to speak at an electioneering meeting last year there was a tremendous protest about the project.

Amazing how the CRS...bash first and question the survivors later...can be brought in to further the ends of private enterprise, when the enterprise in question is big enough.