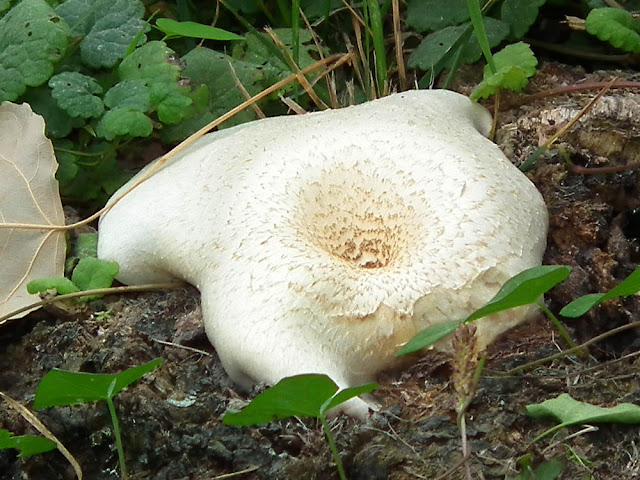 We encountered this large fungus on a tree stump in a picnic area on the River Charente near Saint Simieux in August. Not only was it producing cushions of white flesh, but it had ejected a dense powdering of brown spores which covered the immediate surrounds. 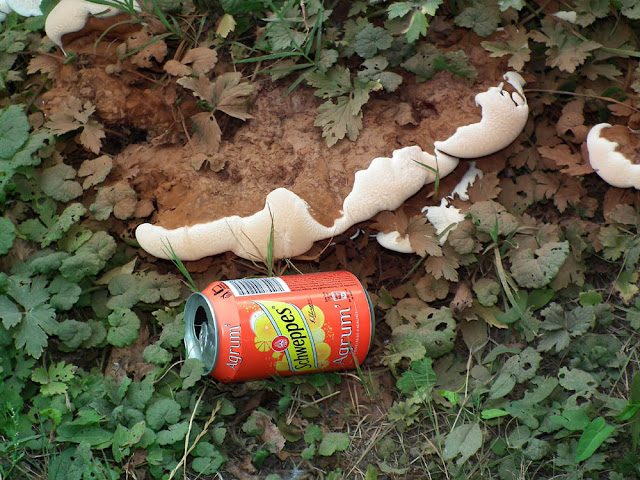 I've no idea what it is called. 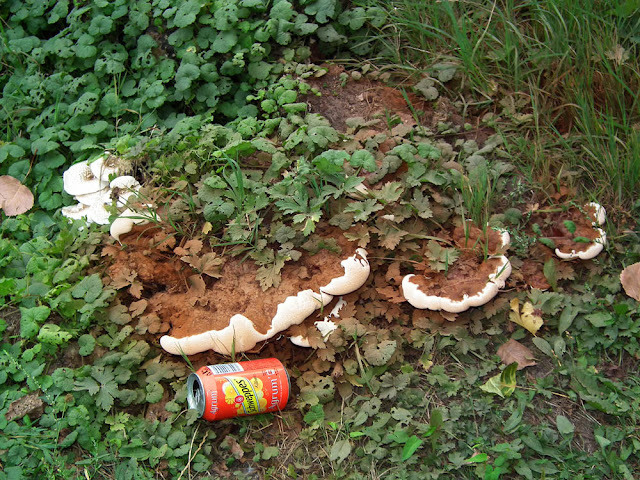 The drinks can isn't litter, by the way. We put it there to try to give some idea of scale.

********************************************
Identification: I finally got round to sending these pictures to Paul Leroy to ask for an identification. He came back the same day (11 April 2013) saying (I've translated) -- "Here is the answer for the big hard brown mushroom: Ganoderma lipsiense, formerly called: G. applanatum.
This mushroom is a formidable parasite. It settles on weakened trees, often Poplars, to kill them slowly. In the photo, the surrounding herbacious plants have been coloured brown -- these are the spores, it is a characteristic feature of these mushrooms.
The white mushroom, a little funnel shaped, is: Lentinus tigrinus. This species is common on damp wood, as well as often found near water and especially on Willows."

Many thanks Paul! The tree stump the fungus was growing on was almost certainly poplar. The English name for Ganoderma lipsiense is Artists Bracket Fungus, and Wikipedia has some interesting information about it.
Posted by Susan at 09:00

The Staff asked me to pass this on....

Susan, it looks like it could be one of Oyster type growing out of that stump... there is a huge one that is harmless but reputedly inedible... something akin to cooked leather apparently. An under view would have helped... poss. Pleurotus cornucopiae... uncommon. There are very few HUGE fungi... on your next outing with the experts, show them a copy of these.

"Thanks for sharing your thoughts on cuban cigars."... I know the things are all covered in brown... but the Staffette thinks it wouldn't smoke very well... snuff perhaps? You are certainly getting e'snuff spam!!

Tim: Thanks -- I'll email Jean and Paul at some stage.

On a re-looking, the Staff is wondering weather or knot there are two fungussies here... and the larger, smoother one is some kind of puffball?

Tim: It crossed my mind that it was 2 species too, but I really don't know.

Tim: I've just had it confirmed by Paul Leroy that there are two species here. I'll update the blog post with what he said.