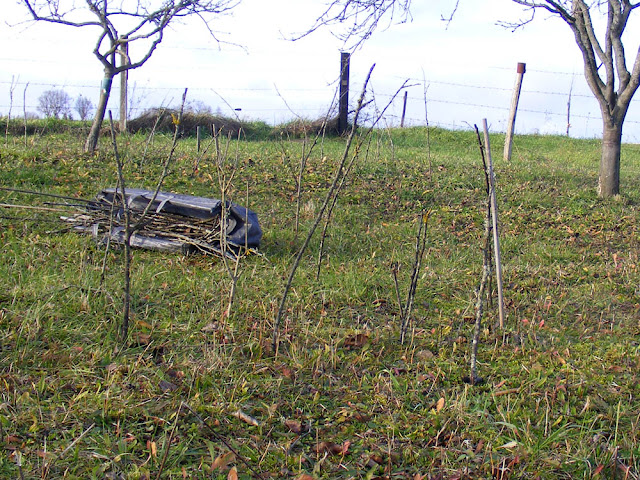 Orchid markers under the apples.

Yesterday was my birthday, and as a little treat to myself I spent the afternoon in the orchard. I wanted to get the rapidly emerging orchid rosettes marked with sticks. This protects them from being accidentally trodden on (or run over if they are closer to the gate). Later, in the spring it will protect them from being mown off before they have a chance to flower. After they have flowered I leave the markers in until early September, so the orchids are not mown over before the seeds mature and disperse. The species that send their leaves up in the late autumn and winter are not frost tender, so they will survive just about anything the weather sends. If it doesn't rain sufficiently in the spring about a third of them could go dormant again without flowering, but mostly, if they send up leaves they flower. 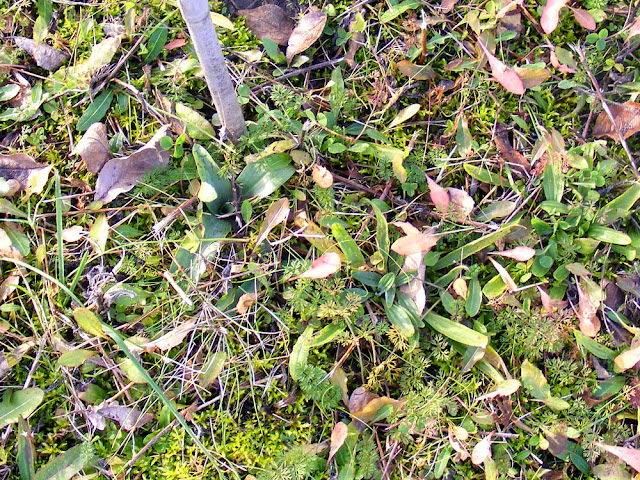 This is what I was searching for to mark.

It took me 2 hours to methodically work over the orchard grass, searching for rosettes of leaves and sticking a marker in just to the west of each cluster of leaves. In all, 124 orchid plants or clusters of plants of 4 species have sent up leaves so far. This year, the early emergers are those under the apples and to the north of the site, unlike previous years, when the southern side and under the cherries seemed to be the first. I expect the laggards, including the 5th species, will come in due course. 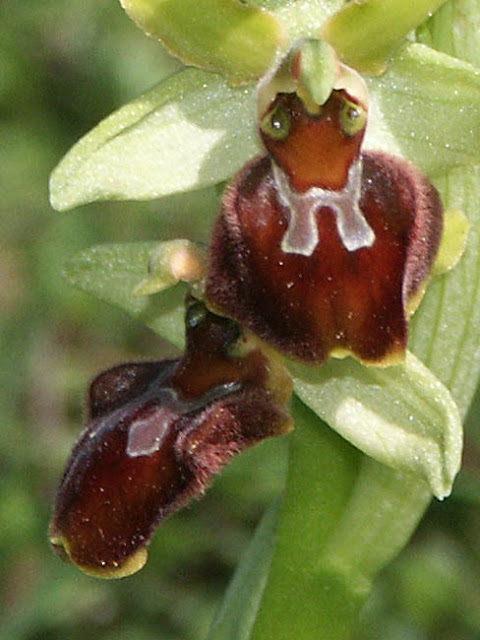 And this is the reward in April for protecting the orchids so they get to flower.
Posted by Susan at 09:00

A belated HAPPY BIRTHDAY. We hope you are rewarded with a wonderful show in April.

Happy birthday from me too.

Did he take you out for a meal then?
If not, it still looks like you enjoyed the sunshine... looking out of the window, today would NOT have been a good choice!

I am still amazed that wild orchids grow in France. I only found out recently, thanks to blogs.
Orchids never disappoint by their beauty.

Did you get my reply to your email? Did you get it sorted? To ask for help and then not respond is BAD MANNERS in my book... Colin

Thanks for the birthday wishes.

Belated happy birthday from us, Susan.

Belated Happy Birthday from us too!

First of all, happy birthday! One of the first things Mr Previous Owner told us when he showed us the garden at Closerie Falaiseau last year was to be careful about not walkng on the orchids. Fortunately, ours are in the back garden and wood, where we don't walk very much admittedly, but the orchids necessarily get trampled on. I hadn't thought to stake them and didn't know I would be able to see the leaves this early. When do they flower? Your photos will certainly help. I won't have time before I leave tomorrow but I can wait for a sunny day at New Year to do the staking.

Fraussie: When they flower will depend on what species you have. It will be sometime between April and July. Shall we do the staking when we come to visit in the New Year? That way you have the benefit of my experienced orchid spotting eye :-)

Thanks for the birthday wishes everyone!