Sainte Maure de Touraine is the name of a town about 50km from Preuilly sur Claise. It is also the name of one of our local chèvre (goats' cheeses), the other being Pouligny-Saint-Pierre. Luckily for us, although I am not a much of a fan of chèvre, I really do like Ste Maure.

Ste Maure de Touraine is an AOC (Appellation d'origine contrôlée) which roughly follows the boundaries of the old Province of Touraine. It has to be made by traditional methods - this just about means that all the cheese is made by hand from fresh ingredients, either on farms or in dairy co-operatives. There is an industrial version made in the same area, but this is called Ste Maure (without the Touraine bit). Our nearest farm is about 5 km from us on the road from Preuilly and Charnizay, and they won a Golden Goat for farm produced Sainte Maure in 2005. 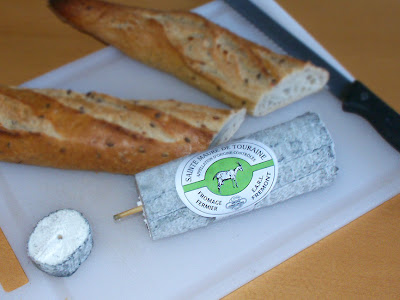 The cheese is made in the shape of a log about 17cm (7") long and has a rye straw running through it to help roll the cheese as it is being formed support the cheese log as it is rolled in salt and ash. The straw is stamped with the name of the maker and the tradition is to use a knife that isn't too sharp to cut around the straw so it is left in the cheese. The industrial version doesn't have the straw.


St Maure is named after St Maurus, the first disciple of St Benedict. He founded the first Benedictine monastery in Gaul. So now you know............
Posted by Susan at 09:45

Very yummy post about one of my favorite goat cheeses, with Valençay and Selles-sur-Cher.
You say :
"St Maure is named after St Maurus, the first disciple of St Benedict. He founded the first Benedictine monastery in Gaul. So now you know............"

I dispute that. Sainte Maure is a female saint and saint Maur [St Maurus] is a male saint.
I made extensive research on the net and, finally, found the following:

I don't think that last one appllies. Picardie is much too far from Touraine.

Here is the link, but the scanning is so bad it is almost illegible.
http://books.google.com/books?pg=PA864&vq=sainte+Maure&dq=dictionnaire+hagiographique&id=TDYGAAAAQAAJ&hl=fr&output=text#PPA864,M1

P.S. Just in case. The roman emperor is Decius. Dèce in French.

Susan and I did discuss why St Maure (the male saint) had an "e" at the end of his Saint(e) when he became a town.

We decided it was just one of those crazy things the French occasionally do to throw us English speakers.

I am interested that the translation of Maure seems to be Moor in these cases, because I thought Sarrisin was a more usual translation.


I refined my search and was lucky enough to find information showing that saint Maur has probably nothing to do with the name of that town. It was named or renamed after sainte Maure (and Britta) whose relics where found in Touraine.

No doubt you know this link that goes right home.
Filet de carpe de Brenne au Saint-Maure-de-Touraine
You'll notice that in the link it is Saint-Maure, obviously one of the myriad of typos that you find on the Net. But within the recipe it goes back to the right spelling of Sainte-Maure.

P.S. The link for the "Filet de Carpe" is:
www.saveursdumonde.net/?action=recette_show&id=1999≶=fr
The recipe is worth reading to the end.

Ah là là - it's one of Jean-Mi's :-) Thank you very much for this - I have not had this at l'Image, but Auberge La Gabriau in the Brenne do a delicious Carpe Paysan, which is strips of carp dusted in spiced and herbed flour and shallow fried.

Thanks for all the hagiographical stuff - these obscure and very old saints are always a nightmare to get any proper info on. I did point out to Simon that Ste Maure appeared to be a girl, but I didn't pay too much attention after that and let him get on with the blog.

Regarding Sainte Maure de Touraine, the place, and its 10th century Seigneurie. Goscelin Pictavinus [Goscelin of Poitou] was the first Lord of Sainte Maure de Touraine, at the time of Foulke Nerra and the Martells. Let us never confuse St. Maurus of Norcia, the founder of Benedictine abbeys and monasteries, including the first of these at Glannafolium, now St.-Maur-sur-le Loire, with Sainte Maure de Touraine, the nun and companion of St. Britta, mentioned earlier by someone whose comments should be taken seriously. Thousands of people believe that Goscelin and his wife, Aramberge de Chinon, were the ancestors of all the SEYMOURS in the British nobility and aristocracy. Rubbish!!! No way. Maura can't possibly be Maurus. Wido de St. Maur was from St.-Maur-des-Bois, Mortain,Avranches, Normandy. He isn't the ancestor of the Seymours either. See chapter 4 of my book ISBN: 9781425161972 "THE SECRET LIFE OF THE EARL ST. MAUR (1835-1869)" [+sub-title] or my site http://www.thesecretlifeoftheearlstmaur.co.uk
In ANNALS OF THE SEYMOURS by R.H.ST. MAUR, London,1902, the author joins up at the top of the pedigree 3 entirely separate families, starting with Goscelin and Aramburge,entering members of wrong families under branches whose alleged knights never ventured over the Channel with William of Normandy in 1066.
Kind regards, Joe A A Silmon-Monerri

Further to my comment earlier this morning, I also agree wholeheartedly with the writer who referred to Maurus being born in Rome [actually Subiaco], where his father, a Roman Senator, left Maurus with St. Benedict, to study the monastic life. He became Benedict's right-hand man. The Bishop of Le Mans requested Benedict to send someone to set up the Benedictine rule and as many monasteries and abbeys as possible, which Maurus did in 543, starting at Glannafolium (Glanfeuil/"Leafy Glen"). Many such monasteries/abbeys/priories (about 140 in all) were named after this St. Maurus of Norcia (Fr: Nursie). This gave rise to the locative surname 'De St. Maur', when surnames as we know them today were in their infancy. Wido de St. Maur, a proven Seigneur-Compagnon of Guillaume Le Conquerant (Duke of Normandy),came from somewhere called St. Maur. There are officially 16 places called St. Maur and two called Ste. Maure, in France. The ones with a final 'e' commemorate St. Maura the Nun, who heroically in the 5th century saved the life of St. Britta (Brigitte) by standing in for her martyrdom. She became Sainte Maura (Lat: SanctA MaurA) de Touraine. St.-Maur-des-Fossés (Paris)is where St. Maur de Glanfeuil's remains [actually an empty sarcophagus], moved many times around France by monks for safety from pillaging Norsemen, ended up. This last location was the centre at which the St. Maur Congregation was set up, centuries later. Yet this is not the place of origin of the British St. Maurs either. The only Norman 'St. Maur' location, giving rise to the Norman locative surname is 'St.-Maur-des-Bois'. These 'St. Maurs' bore 'argent a deux chevrons gueules'. Two red chevrons on a silver field (background)with a label in chief of 3 to 5 points. Almaricus de Sancto Mauro - Grand Master of the Knights Templar of St. John of Jerusalem in Britain, who advised King John to sign the Magna Carta in 1215, was a descendant of Wido, and bore the same arms on his seal.
I now must apologise for my own mistake. In my earlier blog, I mentioned St.-Maur-sur-le-Loire. This should read 'St.-Maur-sur-Loire. 'sur-le-Loir' (with no final'e') implies an entirely different river 'Le Loir' , where there is another place called 'St.-Maur' ('...-sur-le-Loir'), and not 'La Loire'. Maurus died at Glanfeuil in 584, and was buried there. The present monastery of St.-Maur-de-Glanfeuil at St.-Maur-sur-Loire, is closer to Angers,old Anjou capital (Foulke Nerra's stomping ground) than to downriver Saumur, which aurally resembles Saint-Maur, but this connection is still in doubt.
Best wishes to all of you and your splendid site (as it is a collective effort).
Sincerely, Joe A A Silmon-Monerri, Manchester, UK.

Joe A A Silmon-Monerri said...

Joe A A Silmon-Monerri again.
Just another small but important detail, to help keep the record straight: St. Maurus's father was the Roman Senator "Equitius". I had forgotten his name in my last entry.
All good wishes. JAAS-M

Joe A A Silmon-Monerri said...

In ANNALS OF THE SEYMOURS,R.H.St. Maur,an illegitimate son of the subject in my book, the Earl St. Maur (Le Comte St. Maur),had read several versions of a plausible myth. Basing his findings on other authors' works - which were often flawed to begin with - he wrote at length about an Abbyssinian hermit prince who was supposed to be the man who gave rise to the surname "St. Maur". I prove that this was not the case, in my book. His family had all been massacred, according to legend. He was the only survivor, having escaped to Gaul. However, has anyone, especially in France, any further information about this mythical "ancestor" of the Seymours? The prince was said to have earned the name 'Sancto Mauro' ('Holy Moor')because he was a man of great piety, charity and dedication in the community in which he lived [the place is never pinpointed, but rumours often suggest Angers,the regional capital of old Anjou]. Other rumours loosely point at Touraine (which we have already dealt with, and proven untrue),and some suggested Jura,etc. Speculation abounds. When I researched in France, I found no one who knew about this story, although I had seen other texts about it in Britain. I eventually came to the conclusion that the Benedictine angle was the closest we will ever get to the truth. But I would be very interested to hear other versions of this myth.
Kindest regards,
Joe A A Silmon-Monerri, in the UK

Joseph A A Silmon-Monerri said...

May I congratulate the person or persons who put together the excellent piece on the Memorial service at Pressigny [Lat: Pressiniaco]. To add to the slowly growing treasure-chest on the SaintE-MaurE-de-Touraine issue, members later generations of the Seigneur de Sainte-Maure-de-Touraine's dynasty, held that lordship along with that of Pressigny]. This is amply aired, with documentary proof from charters, in the book "SAINTE-MAURE-DE-TOURAINE", a re-print of the original by Ernest Montrot, local historian, available, I think, at the Mairie at SaintE-MaurE. All the influential local families are mentioned, from even before Goscelin's and Aramburge's days (late 900s A.D. onwards)
Mesdames et Messieurs, je vous souhaite bons études généalogiques!
Joe A A Silmon-Monerri.
P.S.: I shall shut up now and probably leave you all in peace for a long while.