On a quiet crossroads between Martizay and Yzeures-sur-Creuse stands this small war memorial to three members of the Maquis (French Resistance. 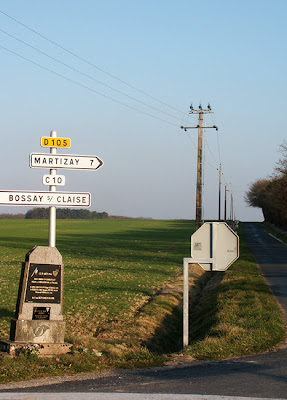 Roger STAUBB, Jacques PISTRE and Raymond THOMAS were killed in combat on the 29th of August 1944. This was 4 days after the liberation of Paris, and the day of the American Victory parade down the Champs Elysees (the French liberation parade was on the 26th of August). 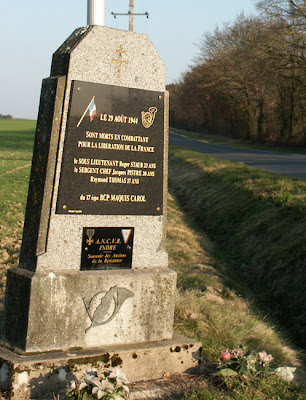 I can't find any details of what happened on a quiet road in rural France 4 days after the Germans in Paris surrendered, but I suspect that the proximity of the railway crossing may play a part.

I think it should be remembered that the Americans were gallant enough to let "division Leclerc" dash towards Paris in late August 1944 so French soldiers would be the first to liberate Paris. But it doesn't mean the Germans were gone elsewhere. There was a lot of them all over the place.

As for sainte Maure, I did some research but didn't get very far this time.

I found Maquis Carol on the Net, but there is not much information. Here are the links but don't expect too much:

I looked for the A.N.C.V.R (Association Nationale des Combattants Volontaires de la Résistance), who probably erected that memorial, at
www.concours-resistance.org/pdf/cnrd-2006_brochure.pdf

In the following link which is a catalog of books
www.ihtp.cnrs.fr/IMG/pdf/catalogue.pdf
I found mention of maquis Césario in August 1944

No doubt Maquis Carol was one of those mentioned above.

That's all I have. Probably older local people would remember what happened at the time.

would the ancvr list the recipients of the medals?

my french isn't good enough to get farther than that.

I've had a quick look at the site and it doesn't seem to name the recipients.
We have recently found out that there was quite a lot of action in Indre at the time of the Liberation of Paris, with the railway lines being repeatedly blown up (on a daily basis) by the Resistance and the Germans took some terrible retaliation, especially in Maillé, about 40km away.
Susan

I don't know what happened precisely but my grand father wrote something about it in his war diary.

Roger Staub, Jacques Pistre and Raymond Thomas came across germans in this intersection. They were in a car and went to Tournon from Bossay.

Before that, Roger Staub escaped death narrowly at La Gabrière. Pistre escaped death also when he was in Sologne in the group "Liberté".

I hope this could help you.

Anon: many thanks. This is an interesting snippet of information. We never know when some little clue may prove important.