A Potted History of the Brenne

The natural habitat that exists today is the result of climatic and geological action over many thousands of years. It is also the result of man's exploitation of these natural features. The land can be divided into three categories: the forest, cultivated land and the étangs (lakes).

A view over a marshy part of the Brenne 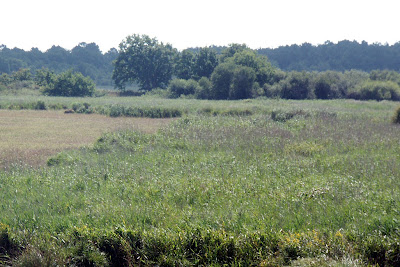 a) The Forest - it was towards the end of the Roman period that the deforestation of this once very wooded land began. This was related to the smelting of iron, which required vast quantities of wood. Dark circles appear on the bare earth in winter, witness to the manufacture in the past. At least 75 ancient ironworking sites have been discovered in the Grande Brenne and the names of the communities reflect the importance of ironworking (Azay-le-Feron, Nuset-le-Feron). The forêt de Preuilly is one of the three principal forests of the Brenne, and I am told that ancient ironworking sites can be seen in a number of places in the forest (thanks Jill and John).

The forests survived in abundance until the height of the Middle Ages. Then, little by little, they retreated, the countryside being opened up by favoured peasants granted land by the new aristocracy. This deforestation had an effect on the soil. The loss of the woodland resulted in increased erosion in winter and altered the drainage because the trees were not there to take up water. Added to that, with the soil exposed, evaporation from the surface increased, leading to soils that were dry in summer and wet in winter. The areas thus opened up were put to use for agriculture and pisciculture. There remains a significant amount of woodland in the Brenne, much of it held as private hunting reserves. The hunting of game such as deer, rabbits, boar and various birds eg woodcock, partridge, quail, duck has always been important to the area and is an extremely popular and traditional leisure pastime. You do not have to go very far in the winter to come across half a dozen parked vans, men in hi-viz vests with shotguns crooked over their arms and happily occupied dogs.

A view over a flowery pasture near the Maison du Parc 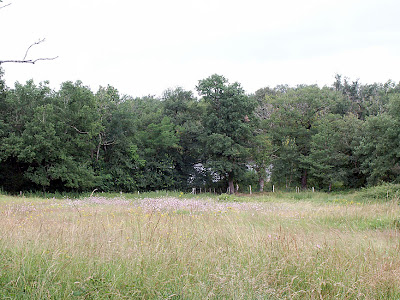 b) Arable land - the Brenne has poor soil compared to the areas to the north (around Valencay and Chatillon sur Indre and between the Loire and the Seine, around Chartres). In many cases, some agricultural practices have contributed to the impoverishment of the soil (burning, grazing), causing an expansion of the heathland. Nevertheless, the pollen record shows that land was cultivated in antiquity and that it continued right through the Middle Ages. Several of the boggy areas have been studied and have revealed that around the 6th and 7th centuries the banks of the Claise at St-Michel-en-Brenne were already open countryside, put to growing cereal crops. Much later, between 1820 and 1840, the Napoleonic Cadastral system identified many small parcels that had almost all been cultivated. It is believed that the area of heath in the Grande Brenne in 1860 was 21 000 ha.

c) The Etangs - the land is flat and the shallow soil is underlain by clay, with the consequence that water retention is easy. The first étangs are believed to have been built by local abbeys in the 7th century. The traditional way to build an étang involves building an earth bank or causeway that blocks a small natural valley, thus impeding the drainage of water. The étangs are emptied in series, one into another towards the same catchment basin. The oldest ponds which use this system seem to have been refurbished in the 11th to 13th centuries. Two dating techniques have revealed very interesting information. First, counting the growth rings shows a date of about 1400 for the creation of the sluicegate on the Etang des Basses Rondieres at St-Michel-en-Brenne. Second, radioactive carbon 14 dating puts the Etang du Grand Mez at Méobecq between the years 960 and 1236.

Two étangs in a chain, the far one has been emptied. 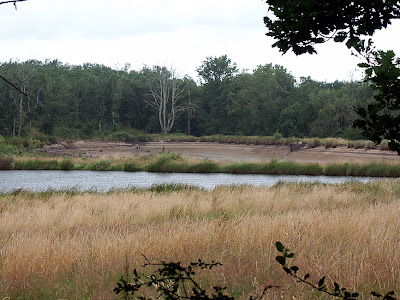 It seems that between the end of the Roman Empire and the beginning of the Middle Ages the area was not the immense swamp it later became, but was actually quite a wooded district. It must have had depressions, where stagnant water collected for part of the year, leading to more or less peaty marshland. It is difficult to assess today how important these areas were at the time.
The real proliferation of ponds came later - perhaps as late as the start of the 14th century and continued until the end of the 16th century. With deforestation, the land had become progressively less suitable for cultivation (too wet in winter and too dry in summer), and so the area was used for fish farming. The creation of étangs seems to also be linked to the rise in the commercial exploitation of fish, notably carp, due to the distance from the sea and it seems likely that this was a response to local needs and/or changes in diet. In 1844 the Grande Brenne had around 931 étangs covering an area of 6500ha. It seems that the increase in the number of étangs lead to the Brenne becoming a somewhat unhealthy district, marshy and unsalubrious. Malaria ravaged the population.

A campaign to drain the ponds and reduce the risk of malaria began in the second half of the 19th century and continued to some extent into the beginning of the 20th century. In 1920 the Brenne had no more than 191 principal étangs, covering an area of 3100ha. This drainage programme was conducted in parallel with the building of all weather farm tracks and by 1872 the Brenne was no longer enclosed and had been broken up. Today the number of étangs is again increasing and, like the forests, many are in private hands and provide leisure angling on a commercial basis. A significant number are farmed on a commercial basis, producing 1200 tonnes of fish a year, more than half of this being carp, which is sold for the table in France and Germany.

Most of the étangs are not accessible to the public, but there are a number that can be easily seen from the roadside or on nature reserves eg la réserve naturelle de la Chérine, owned by the Ligue pour la Protéction des Oiseaux.

The colonisation of the flora associated with the étangs is probably relatively recent and there is much we still don't know about the history of the area.

As your last entry on the Brenne, this one is very informative. Your translation seems pretty good to me and it reads as if it was originally written in English.
Nice view to have from a bathroom!

Mind you, from French to English is the easy direction for me. It's always easier when the text is somewhat technical and I am already familiar with the subject too. It will be a long time before I can make my French read like it wasn't written by an English speaker.

Re the bathroom: I must admit that the view from the bathroom is not one of the things I paid much attention to when we bought the house, but it is clearly important to Simon! The guest bathroom will look out on the view slightly to the left of the picture he has posted - over the cemetary - not quite so good perhaps, and possibly an acquired taste for some.