A Note About Pronunciation

The name of our town, Preuilly sur Claise, is not a particularly easy stretch for the English speaking tongue. 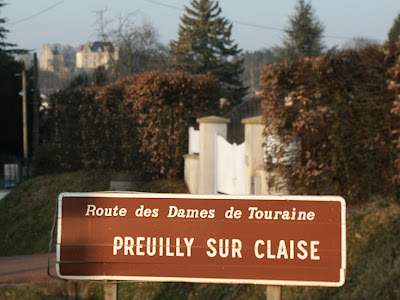 Theoretically, it should be pronounced something like 'prer-ee syur klez'. Ideally, one should blend the two syllables of Preuilly so smoothly that they almost sound like a single syllable - 'pruhee'. I have had my pronunciation corrected when I have articulated too carefully. The stress, as is usual with French, is fairly even, but slightly stronger on the first syllable.

Of course, the town is often just referred to as Preuilly, but you need to be a little bit careful - there are a number of towns called Pouilly (pronounced more like 'pooey' and seen on the labels of some very nice white wines) and about five towns in France called Preuilly. The first time we arranged for a builder to look at the house and give us a quote, he ended up in a town about 100km distant, and there is Preuilly la Ville, only about 20km away, in the Brenne.

The name Preuilly comes from the name of a Gallo-Roman owner of a villa on the site of the town.

Don't be fooled by the title of the blog. If you say 'Claise' as if it were an English place name, the blog title contains an assonant rhyme, but in French it is pronounced differently and is less effective.

Don't be fooled into thinking I am any sort of authority on French pronunciation, either. I can just see the wry French smiles on reading this!

I have had several French friends comment that English speakers don't move their lips enough. It is true - in English, the lips bob gently up and down and the face can remain as non-committal as one likes; but with French, the mouth is one second stretching taut back towards the ears and the very next syllable is coming out in a pout. Maybe this is just too demonstrative and unnecessarily melodramatic for many English speakers to feel comfortable with.

(Thanks to Emile, who looked at this post before I made it public, just to make sure I wasn’t completely on the wrong track.)

interesting blog-we live in palm beach county fla usa-we were in france last ,5 years ago-my wife was born near chester uk and moved to the usa when she was one year old-we have a 16year old-hope you are progressing well and have few problems with the change in govt-merci-richard