Opposite the bibliothèque is a garden. Arboretum is too grand a word for it, but it has half a dozen 'arbres notable' (notable trees). Originally the garden was a graveyard and the now disused and rather crumbling 15th century building (below) that sits in the top corner by the road to le Grand Pressigny was its chapel (chapelle de tous les saints). 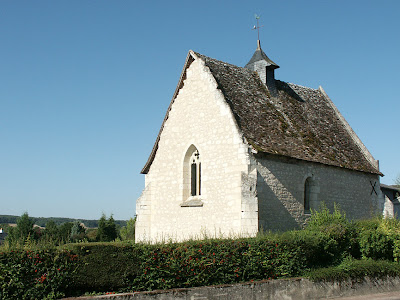 In the garden, planted as close to each other as is feasible for two such large trees, there is a Cedar of Lebanon and an Atlas Cedar (the far grey-green tree, below) as well as Yew, an extremely robust looking Berberis (in the middle, below, near the seat), and a Common Lime (bottom, on the left) by the entrance. 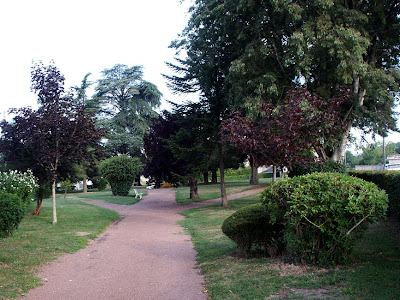 The other two arbres notable, Celtis australis (in the middle on the right, above and below) and Spanish Fir (below, behind the Celtis) resonate in particularly personal ways for me. 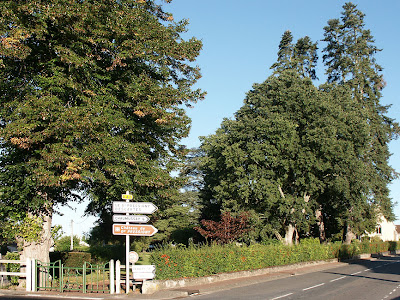 Despite its name, this Celtis is a European tree, 'australis' just meaning 'southern'. In my parents' front garden in south-east Queensland, Australia, there is a very similar looking mature Celtis (in this case, an Asian cousin I think). Although, to be frank, Celtis is nothing out of the ordinary to look at, it is tough and well able to handle drought. Perhaps in some way compensation for its plain looks though, around the world Celtis is the favoured food plant of the caterpillars of some rather showy butterflies. Sadly, we are too far north for the Nettle Tree Butterfly in Preuilly, but some years my parents' tree nourishes a small number of Tailed Emperors .

Finally, there are two Spanish Firs, Abies pinsapo, planted close together in the garden in Preuilly. This provoked a memory from my childhood, as in a paddock by the house on my father's family farm (now sold and and the land subdivided for housing) near Geelong, Victoria, there stood a tree that I remember being told was Spanish Pine. I was never able to identify it for sure, but I wondered if perhaps it was Spanish Fir, a species endangered in its native Spanish mountains. Of course it may well have been something completely different.

A link giving pictures and details of the trees in the garden is here.

The last post was about the bibliotheque. This entry is being posted from there.
Posted by Susan at 19:38

love your cemmetery turned mini-arboretum.
I found the following, that you certainly already know, in
http://nature.jardin.free.fr/arbre/nmauric_celtis_africana.html

You can check also:
http://www.plantencyclo.com
Very interesting and informative post as usual. What else can I say?

I knew there was an Australian native Celtis, but I didn't know its English name, or that it was sacred (presumably to the Aborigines). Where my parents live, a Chinese species, C orientalis, was a very popular garden plant but now discouraged, as it has escaped into the wild and is romping through the native bushland. In the US, I see that the native Celtis there is known as Hackberry, and it too is host to one of the Pasha butterfly caterpillars (the Australian Tailed Emperors are a type of Pasha). Curiously, the European Pashas don't seem to use it.

Jardin ! L'Encyclopédie is a useful looking website. The personal list facility is nice and the forum looks friendly. Thanks for the references.