Robert Johnson sang "I went to the crossroads, fell down on my knees".

In France, many of the crossroads have crosses on them for exactly the same reason Robert Johnson fell on his knees - it's where the devil appears with the intention of tempting people. Most of the crosses in our part of France are pretty unimaginative compared to some other regions, the best we have seen being in Deux-Sevres. There the crosses include life sized fibreglass crucifixes on top of a mountain of millstones and other such delights.

Our local crosses are usually either concrete or cast iron. The cast iron ones are sometimes quite ornate, the concrete ones are very staid. This is one of the latter. 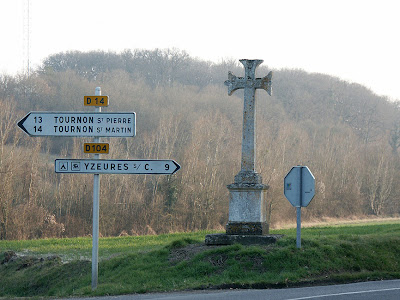