We have just returned from a weekend and a bit in Preuilly.

The main reason for going was to visit the Foire au Safran, which is one of the village's annual festivals. This was our second Foire, as we also made the effort last year. This year's fair was slightly smaller but no less interesting, with a display of local produce (including saffron), arty stuff (glasswork, pottery and basket making) and patronomie. We met and spoke with the people from the history and archaeology society, who appeared delighted to meet the people who had bought "the house with the beautiful carved stone over the doors". The president of the society says it is an interesting house, and knows some of its history. He was also enthusiastic about being allowed to see inside the house, but we fear it may be a disappointment for him..... Susan will be writing more about some of the stalls later, but my favorite was the nougat stall. 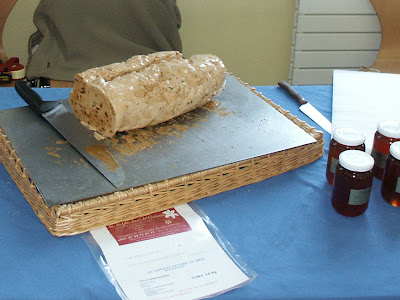 On the evening of the Foire the local restaurants all have special safforn flavoured menus. As we did last year, we ate at L'Image. Jean-Michel once again managed to surprise us with his imaginative blend of ingredients and flavours and we had a great evening.

When we arrived at the house our water was turned off. We had assumed that the builders did this when they left in Spetember, but it now appears that during October the old gas water boiler in the kitchen sprang a leak and caused a stream in the street which the commune halted by turning off the secret tap buried in the middle of the road. We had to visit the Mairie to arrange the resupply, and then organise a visit by the plumber to remove the offending item.

We had also arranged for Rob the electrician to visit and install some prises (plugs) so we can use electricity in the house without having to start the generator. We can now light the house and heat one small room, making life a lot more comfortable. Staying in the house and not being cold whilst all around is frosty is a great feeling.

At the Foire we ran into Pierre-Yves and Sylvie, two of our neighbours, and spend a very pleasant afternoon looking at their house. They had to wait until M. Galland finished our roof before starting theirs, which was a little embarrassing because they had been waiting longer. They have a complete new roof on a pegged wooden frame, the difference between their roof frame and ours being that because huge oak beams are no longer available the beams are composites made with pine. It is still impressive seeing a new roof made in the traditional style, however. We were also offered the use of their laundry tap until we had our water turned on again, which was most kind. 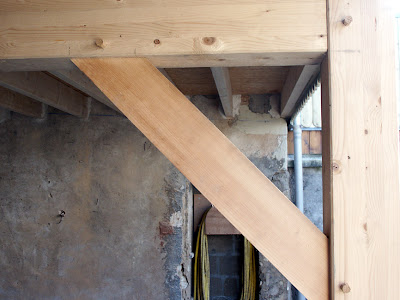 Alan and Jane visited and were given the guided tour of the house. They also invited us to dinner AND the use of their bathroom, a kindness I rewarded by trying to steal their shampoo.......

We also managed to remove the last of the demolition rubble from my attack on the staircase and the "dry" lining of the salon (which, interestingly, our elderly neighbour refers to as the salle à manger).