The Brenne has a temperate maritime climate, for all it is 200km from the sea. The prevailing winds are from the west or south-west ie from the coast, bringing most of the rain and generally scooting along fairly smartly, with gusts regularly recorded of 70-100km/hour. Winds from the north or north-east are coming from Scandinavia or Russia and are cold.

A frozen étang at the Maison du Parc 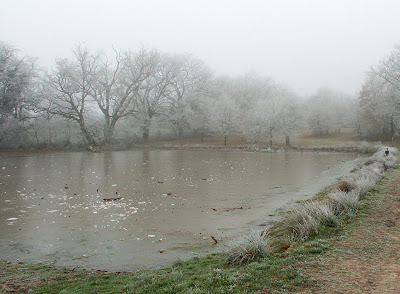 The average annual temperature is 11°C. Winter gets 60 days of frost and the average temperature is 4°C. The temperature rarely gets down to -10°C and winters are generally mild (by European standards). Although it can frost into May, on the other hand, the days get warm very early in spring.

The same étang in mid-summer 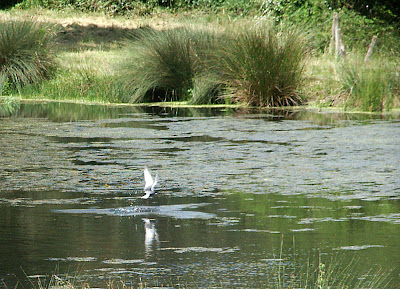 November to February receives 50-90 hours of sunshine per month, increasing to 250 hours in July. On average there is 2000 hours of sunshine annually. This is quite a lot of sun - compare with London, which averages 1200 hours annually, and Sydney, (although by no means the sunniest Australian city) which gets 2500.
Le Blanc - raining in mid-summer, but still gorgeous 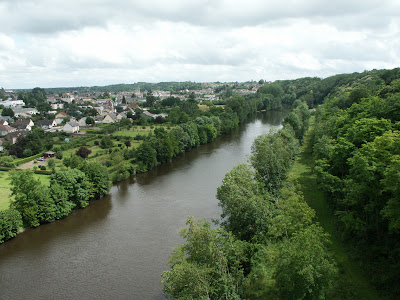 Rainfall is relatively evenly distributed throughout the year, at the rate of 50-65 mm per month. May is the wettest month (but don't let this put you off - it is also the most beautiful month) and July is the driest. April is often dry, however, the rainfall pattern is unpredictable from year to year and considerable variations have been recorded even within the Parc. The average annual rainfall is 700mm. This is considerably less than Sydney's 1200mm, which is generally regarded as rather wet for an Australian city, but on a par with London's 750mm - also generally regarded as a rather wet city. This can be explained by the fact that in London it so frequently drizzles rather than really pelt it down, leading to many more inclement days in order to deliver its quota.
(Note: Much of this information has been cribbed from 'Flore remarquarble du Parc naturel régional de la Brenne' by François Pinet. Any errors are the result of me either misunderstanding or mistranslating the French terminology.)

Email ThisBlogThis!Share to TwitterShare to FacebookShare to Pinterest
Labels: nature and wildlife, the Brenne, Winter

I have lost the RSS feed from your blog, so I cannot notice updates easily, without actually opening the blog to se if it has changed. It used to have a RSS link, didn't it? - but it seems to have disappeared since 25 January 08 or so. Usually Blogspot blogs offer a blue RSS link in the address line on the RHS. Everything OK otherwise?
Howard de Richelieu

Again, your series on La Brenne is very interesting. I'm learning a lot. Thank you.