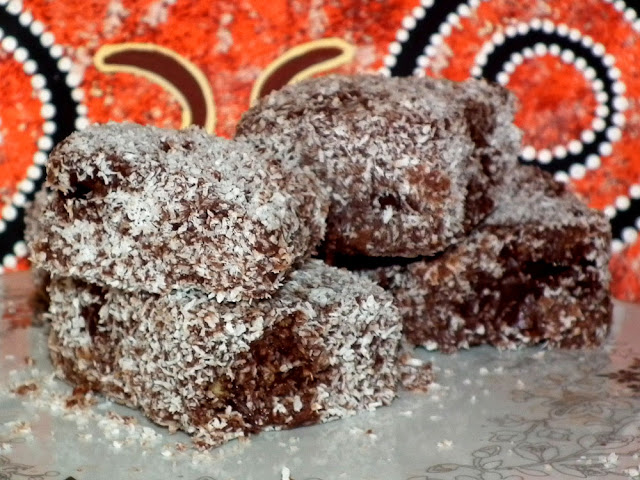 Lamingtons are one of those peculiarly Australian recipes that have not really made an impact outside of their home nation -- unlike pavlova (which turns out to be a New Zealand recipe anyway...). Non Australians have sometimes heard of lamingtons, and occasionally seen them in well read teashops willing to experiment a bit, but few are aware of how embedded in the Australian culture lamingtons are. And even Australians are unaware of their history, and that they were invented by a Frenchman!

These small cakes are called lamingtons after Lord Lamington, Governor of Queensland at the turn of the 20th century. The first printed recipe for them appeared in Queensland Country Life in December 1900. Very quickly, by the time the First World War had broken out, they had spread throughout the country and became a staple of agricultural show baking competitions.

For those of you who have never encountered a lamington, they are made from squares of a plain slab cake, dipped in chocolate syrup and coated in dessicated coconut. They seem to have been invented by Armand Galland, the French chef working for Lord Lamington. His wife was Tahitian and he may have got the idea of using the then unusual ingredient coconut from her. They remain fresh and delicious for several days and can be transported easily, hence their popularity in rural areas where isolated women would gather for precious social events and bring a home baked cake.

It's possible that the first place lamingtons were ever served was at Harlaxton House in Toowoomba, close to where I grew up. The Governor would decamp to Toowoomba, in the hills, to escape the heat and humidity of Brisbane, the State Capital on the coast. During my youth lamingtons were mainly encountered as a means of charity fundraising, known as lamington drives, where a local baker would supply the cake and volunteers would then coat squares of cake with chocolate and coconut to sell to the public.

These are very common in tea shops in Scotland.... or were, if tastes have changed [probably not... it is Scotland].... these are chocolate coconut squares.
And as the Lamington Estate is in Scotland, I think he was getting some comfort food made.... and starting a tradition!!
How lovely.... they are some of the stickiest, most moreish waistline expanders I know of.... I used to have one Lamington and one chocolate-covered caramel shortbread [another waistline expander] and a pint mug of thick hot chocolate in the cafe at Inverewe Gardens everytime my thenwife and I visited.
I've eaten ones that look like this, as well as pink sponge, chocolate sponge and ones with marmalade in the middle.... from the outside you can't tell.
Thank you for the recipe....

I wonder why they aren't called lamingtons in Scotland? They come in the varieties you describe in Australia too, but most people scorn them as not authentic.

Possibly because they originated in Scotland and are just chocolate coconut squares up there.... and the Lamington connection is purely Australian because it was he who had them made as a taste of home... so they caught on in his name in Australia.
And, as they come in the same flavours in Australia, he may well have asked for those.... or visitors to Scotland, or £10 poms brought those flavours back/with them.... but, they are authentic flavours.

If it isn't your camera, that halved lamington looks much richer than the ones I've had in Scotland.... the ones in Scotland that I recall are a lighter Victoria sponge consistency... given the French love of using very egg-rich mixtures, could that be an alteration to the original that Armand Galland introduced.... or he made a sponge French style when the cakes were described.

Some people do a Victoria sponge type cake. Galland quite likely did a Genoise type sponge as his basic cake, given when he was working. This one is just a plain cake, with fewer eggs than a sponge and not relying on the beaten eggs for loft.

There is no evidence lamingtons originated in Scotland that I have have come across. Like for pavlova, plenty of people have investigated the origins. Variations on the standard lamington are generally considered to be people mucking about with the original -- which can be fun, but always cause discussion.

Lamingtons didn't originate in Scotland... they are the same thing, but the Scottish is Victorian Tea House fodder.... The version you are looking for have never, in Scotland, been known as Lamingtons... that is purely Australian from Lord Lamington.... what I am saying is that he, or possibly his wife, wanted some home-comfort food and Chocolate Coconut Squares was chosen and described to Galland... from that came the lamington as you know it.