The Lordship of Brizay was allied to that of nearby Ile Bouchard and was in existance by at least 1050.  In 1440 Jean de Brizay was authorised by the King to fortify his holdings here, but there is no trace now of this medieval castle and we have no idea what it might have looked like. 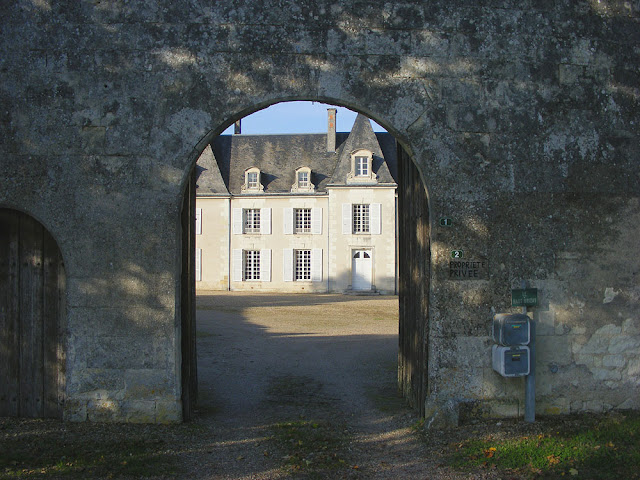 The southern facade of the existing chateau (the side visible in these photos) dates from the 17th century, but was somewhat remodelled in the 19th century, along with extensive remodelling of the northern facade. Pavillions and a belltower were added in 1895, running water was installed and the park redeveloped.

The chateau forms an L-shape oriented east-west, with a small conical roofed tower sitting at the junction of the two wings on the southern facade. The main wing has seven bays and a slate roof. The tower is a vestige of an older building. 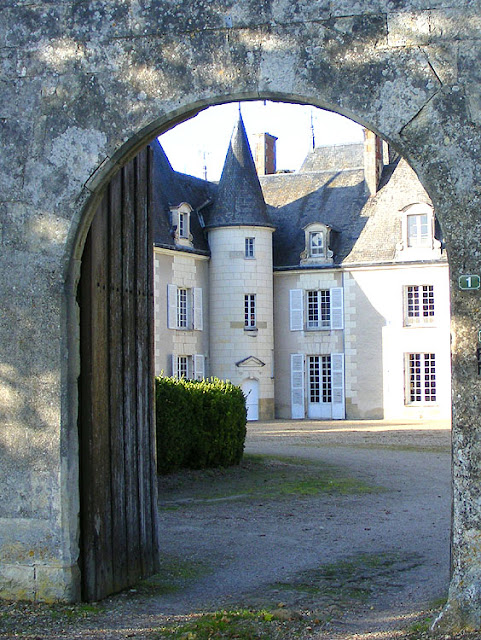 Mining engineer turned agricultural reformer Alfred Goussard de Mayolles turned the estate into an experimental farm in 1865, where he conducted trials of fertilizers. He did not own the property but had a verbal agreement with the widow of the previous owner to develop the property agriculturally, as it had been left fallow for twenty years. His first job was to restore the outbuildings so that he could stock the land with sufficient beasts. He also took the opportunity to create a laboratory in one of the buildings, and started experimenting with the use of chemicals in fruit production. The farm was taken over by the Prussians in 1870 when they invaded and they inadvertently introduced tuberculosis into his herd, resulting in the loss of many animals. After the Prussians had been defeated he began working with horsedrawn mechanical harvesters, rakes and threshers, publishing a number of articles about them, pointing out that less skilled human labour was required. To interest others in these new machines he organised international competitions for harvesters and threshers, held at Chinon in 1873 and Mettray in 1874. Experimental work continued and he started using steam powered machines. Because of the continuing tuberculosis problem he gave up on dairy cattle and concentrated on pigs, goats and sheep. The farm became renowned locally for the quality of its seed wheat, attributed largely to his innovative farming methods.

He purchased extra nearby land, reputed to be infertile, in order to continue his experiments, and began by growing stock feed and bedding. He wanted to introduce the Parthenaise breed of dairy cattle and selectively breed them to develop a beef herd. Initially he concentrated on veal, but the aim was to increase the size of the animals and provide a herd to restock his property. Next, he interested himself in  certain strains of Siberian oats and wheat, resulting in crops which grew remarkably well. Upon the death of the Chateau du Haut-Brizay's owner, Goussard de Mayolles moved on, to manage a business exporting frozen British beef.

His wife, Jeanne Le Clerc, was born and raised in Tours, the daughter of a botanist and medical doctor who taught at the School of Medicine in Tours and became Head Doctor at Tours General Hospital. Her husband worked primarily as a mining engineer prospecting for minerals in Colorado and New Mexico and Jeanne accompanied him on his travels. Later she wrote a book about her experiences called Une Française chez les sauvages. She wasn't overly impressed by many of the things she saw but she provides an interesting contemporary account of Navajo Native American culture. The 'savages' she refers to are not the Native Americans though, they are the white colonialists of the south-west of the United States. Amongst her adventures, she was wounded by a bison, and engaged in a skirmish with Native Americans that involved her firing a gun.

Jeanne's father had been raised by Doctor Pierre Bretonneau (who along with colleagues Doctors Trousseau and Velpeau is a household name in these parts). Her father, who was mostly absent as far as Jeanne was concerned, had himself travelled widely in the south-west of the United States. Eventually he caught Yellow Fever and died in Texas. Bretonneau refers to him in several letters to friends as 'my Texan'. Le Clerc wrote a book about the Texan Revolution of 1835-36, which was translated into English and well regarded.