There has probably been a chateau at Montgoger, near Saint Epain, since about 1150, originally a fortress with a keep. Towards the end of the 15th century a U-shaped building around a courtyard was constructed, with round towers at each corner, one of which contained a chapel. The lateral wings of this chateau were demolished during the Revolution, and the towers reduced. 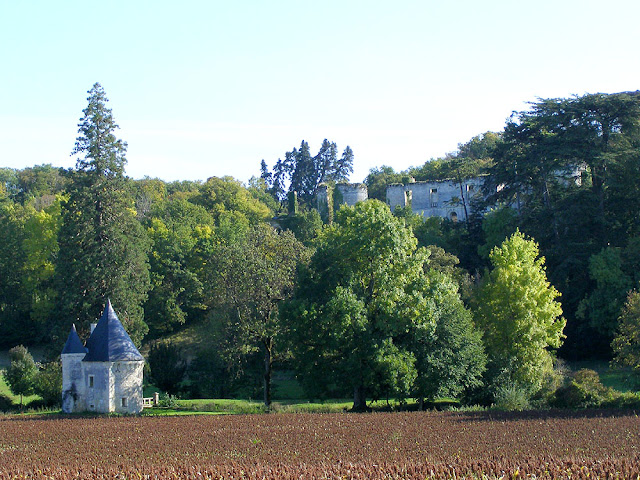 Restorations and improvements were made during the second half of the 19th century but in March 1883 fire ripped through the building, destroying three-quarters of the structure. The remaining part was also destroyed by fire during the German occupation in 1943.

The chateau proper being uninhabitable, the 18th century Orangerie was extended and turned into residental accommodation. You can rent virtually the whole place, which can sleep 30 people and seat 100 people for a reception [link]. There is a 7 hectare park, with lots of centenarian trees and access to the extensive Forest of Montgoger [link]. The 17th century stables also survive, and a restored postern gate to the north. This small tower must have been part of a Renaissance gatehouse and been paired with a second tower with the main entrance to the chateau complex between them. The tower is two storey with decorative machiolations and a staircase turret.

Louis XIII considered Montgoger one of the most beautiful chateaux in his realm. It faces the road between Saint Epain and Crissay sur Manse. It's on the route most likely taken by Joan of Arc when she travelled from Sainte Catherine de Fierbois and Chinon.

Thanks for telling us about another château I had never heard of. It's probably one of the many whose turrets we get a glimpse of as we drive around the area and think "I wonder what that is".

Along the valley of the Manse is a lovely drive. I'll bet you've done it at some stage.