The area around Le Grand Pressigny has a subsoil littered with massive slabs of flint. In the late Neolithic (about five thousand years ago, for a period of 500 years) it was a hub for the production of long blades which then found their way all over France and into the Netherlands, Switzerland and the Rhineland.


The more recently much prized white chalk limestone tuffeau formed in the Paris Basin when it was a sea 90 million years ago. The flint formed at the same time, but millenia later the chalk surrounding it degraded into clay that protected the slabs of flint's integrity during the Ice Ages.


Livres de beurre are found so commonly around Le Grand Pressigny
that they are used as home decor. 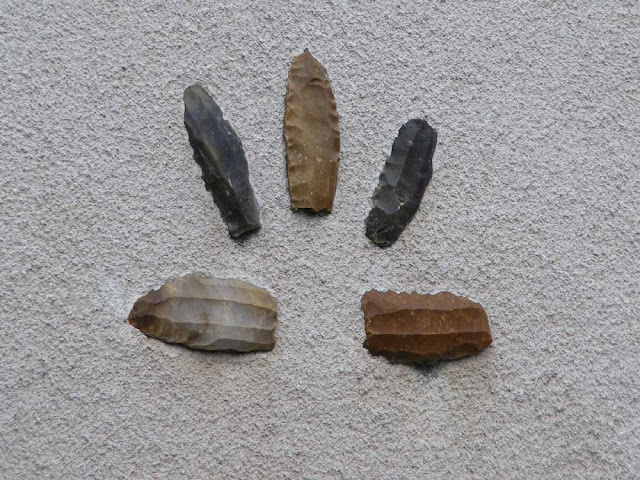 Around 3000 BC flint was being extracted from hillsides and hilltops around le Grand Pressigny. Cores were being shaped on site, then transported to workshops and houses in the small hamlets where people lived. Craftsmen began to emerge, who could create fluted cores known as livres de beurre (pounds of butter) which they then struck long thin blades from. The blades were made into daggers and sent north, east and west, where they have been found in Brittany, Poitou, and the Jura.


A 'master craftsman' of the period could produce a couple of dozen blades from two cores in a day. That's an estimated 800 blades over the summer. To knap blades like this takes immense concentration over a two to three hour period per core as well as knowledge and experience, and involves hundreds of hammer strikes and pressure shaping nibbles.


A livre de beurre in a private collection.

It is obvious that years of training to become truly skilled was required to produce these types of tools, which means a system of masters and apprentices. About 10% of cores found by archaeologists have been clumsily worked or reworked, suggesting they are practice pieces.


The evidence, particularly from a site at Barrou, shows that there was a flint knapping season, when work was concentrated into about a month every year during which 50 to 80 cores were processed at the site, resulting in 500 to 800 blades. Not all the flint is top quality, which suggests that local farmers extracted nodules or slabs from their land in readiness for handing it over to the blade makers when they arrived for the season. In exchange for the 'raw' flint, the farmers would have got blades in return, the number probably varying depending on the quality of the unprocessed stone. The farmers could then use the blades for their own daggers, or as items for other exchanges of goods.


At the time all this was going on, the area around Le Grand Pressigny would have been a mosaic of small farming communities, connected by footpaths and rivers such as the Creuse and the Claise, with pasture, cultivation, open cleared fallow land along with forest and burial grounds. The population lived in wood and clay houses topped with bark or thatch roofs. The pottery found at homesteads is crude but they used a wide range of stone tools, many of which were made from the waste flint from the fine blade making and primarily used for working wood. No wooden artefacts survive from around Le Grand Pressigny, but based on contemporary communities in other places they would have been making bowls, spoons, butter churns and a wide range of other objects for the home and farm. The livre de beurre cores themselves were also sometimes reworked for a new life as a tool in their own right. The fine blades themselves don't seem to have much of a role in daily life in Le Grand Pressigny, and the techniques used to make them have been found in the Dordogne and Charente, so it is now believed that the master blade makers were not local but itinerant.


I've written previously about flint production in my blog post about the Archaeolab. I wrote about the problem of what to do with the remains of modern flint knapping demonstrations and a description of a local archaeologist showing how it is done.

One livre-du-beurre was found near Durham, so the cores themselves, as you say, had value in making other smaller, less blingy tools. That one was probably used as currency... exchanged for board and lodging... it looked untouched when compared with the ones here, just a bit smaller.... and it was the correct colour to be flint from around here. It was labelled as flint from the Centre of France.

Well they are still quite a chunk of flint, so it is not surprising they had a value.