Film director Sylvain Desclous has made another film in Preuilly. The first was Vendeur, a feature film. The current one is a documentary, and as with Vendeur, he chose to present it first in Preuilly, with all the film making team present and available to answer questions after the screening. He revealed to the audience that he was worried about two things -- that no one would come, and that we would not like the film. He need not have worried about either thing -- the salle des fêtes was full to bursting, and we all loved the film, with everyone agreeing the cinematography was beautiful. Three hundred and fifty people attended, with another hundred and fifty turned away!


The director and a representative from Ciclic answer questions from the audience. 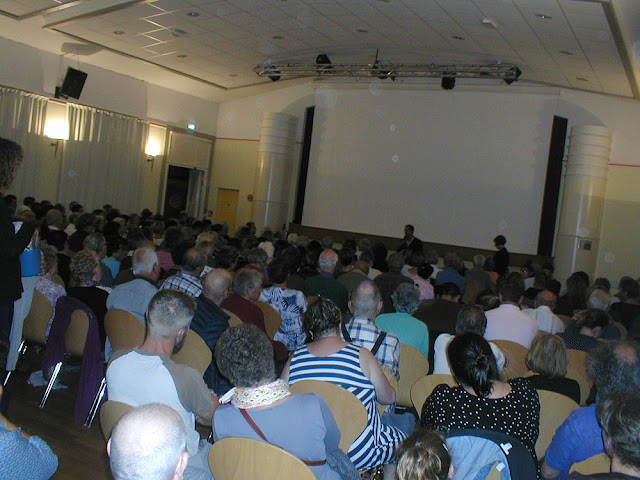 Preuilly is used as a proxy for all small rural towns, and the main subject, 75 year old Gérard Saumonneau, is followed by the film makers as he pootles around on his moped, drinks endless glasses of cheap room temperature rosé and smokes rollups. He hangs out with his dog Zorro and his friend Jacky and together they talk about the past, restaurants that are no more than reminiscences now, loves long gone. Sometimes they watch television together. He claims not to care about death, but did admit that he would hate anything to happen to Zorro. None of it is set up, the film makers visited when they could and turned the camera on when Gérard was relaxed and left again when he'd had enough.


The filming took a couple of years. Sylvain knew Gérard from when he was a kid staying with his grandparents, who lived close by, but the idea for the film came after Sylvain ran into Gérard again a couple of years ago. He spent some time getting to know Gérard before filming even started. Gérard himself set the schedule -- sometimes the crew would knock on his door and he wasn't in the mood and they'd have to go away. Other times they were allowed in and the camera rolled on whatever was happening in his life at the time.


Gérard attended the pre-launch screening and received a big round of applause as he and Jacky walked across the hall to the front. They appeared completely unphased by all the fuss. I'm sure everyone in town knows him, at least to say 'bonjour' to, and knows where he lives. They also know that he is an alcoholic, but he is not in the least threatening, never violent, always rather a gentle person. As the film shows though, he does have a mouth on him in private conversation. He doesn't give a damn what other people think, but he was remarkably cagey about any real personal details of his past, and what was unsaid had an important place in the narrative.


The director's aunt, Claudette, is one of our walking companions and she tells me that there will be a second screening of the film sometime in October, so if you missed it, look out for notices advertising it. She is going to send me the details and I will forward that to my contacts and post on Facebook. If you are not on my contact list and would like to be, please email me (use the link to my profile on the side bar).


La Peau Dure was made in part with funding from Ciclic, the Touraine film archive.

In the local newspaper.

Another article in the local newspaper.

Great stuff. Where will it be shown, all over France on a general release or more a regional film or TV? Don't know how that works in France. They have just finished a second TV series of The Bay filmed in and around Morecambe Bay. The first one was good. Its a police/crime series.

At this stage the director isn't sure, but probably on television. It's been shown at the cinema in la Roche Posay, but of course, the audience there is a bunch of locals again. The film is being entered in a couple of competitions and festivals.