One of the things on my 'to see' list when we went to the Pyrénées-Atlantiques for a few days break in September was vultures. Yes, vultures. There are three species of vulture that can be seen in the mountains of France (plus a fourth that might appear as a rare vagrant). The one you are most likely to see is the Griffon Vulture (Fr. Vautour fauve) and is the one that occurs in the French-Spanish Basque border country that we were staying in. 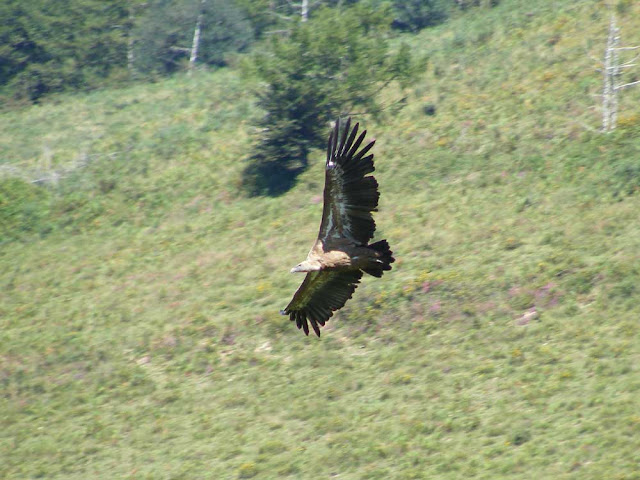 I thought we would have to go up high, bleak and remote, but in fact, we drove to the place where we we had the best sightings, and took the tourist train to another site where they were present. I suspect that not all the tourists catching the Petit Train de la Rhune notice the two or three big birds circling overhead, and I also suspect that not many people get to see the numbers of vultures in one place that we did at our lunch spot on the Spanish side of la Rhune.


After failing in our first attempt to catch the famous tourist train we decided to drive over into Spain and just take roads at random. From the town of Bera we climbed up and up on increasingly narrow roads until they became ridged concrete and then finally dirt. Then the road ran out -- or at least, there was a sign saying the public was not allowed to continue up the track in a car. It was lunch time and we had a picnic, it was sunny and we parked on an open patch of grass to spread our food out. 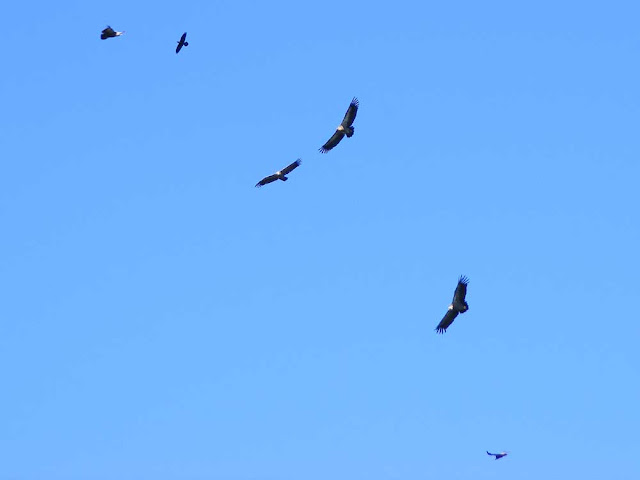 We hadn't quite finished eating when out of the corner my eye I saw a big bird glide in from behind me. 'Look! Look!' I squeaked to Simon. 'A vulture!'  They are unmistakable. Within seconds though, another appeared, and then in quick succession, another and another. Over a period of a few minutes more than 20 vultures turned up. Some just circled around, but others, the earliest arrivals were clearly coming down and landing.


We rushed over to the fence of a nearby cattle enclosure. We could see the vultures coming down, but some bushes obscured exactly where they were landing and what they were doing. Later reading about them makes us think that one of the cows must have been secreted amongst the trees and shrubs, giving birth. The vultures come for the afterbirth. 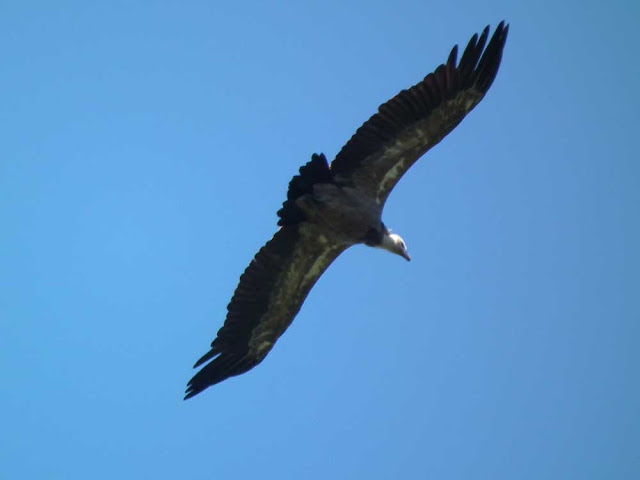 Griffon vulture numbers in the western Pyrenees had dropped to just a couple of thousand pairs in Spain and none in France in the 1960s, due to hunting, poisoning, loss of food and habitat, and collisions with powerlines. Thanks to conservation efforts and legal protection, numbers have increased tenfold. Vultures are now easy to see in the mountains and are directly benefitting from the re-colonisation of these areas by wolves. Now the locals are more sensitive and educated, and there are hides and feeding stations in a few places, to encourage tourists to appreciate these gigantic birds.


Immature vultures have been known to travel from Spain through France and up to the Netherlands in recent years, before returning to breed in the mountains. The re-establishment of wolves means that there are increased numbers of deer carcasses and the natural food chain is more reliable. Griffon Vultures are a real conservation success story.

Interesting, I would not have thought about Vultures bring around in France and Spain.

No, they seem very African or South American, don't they?!