Earlier in the year Marie-France and Gérard (who grew up in our house) called me to say they were going on a world trip and were having trouble with the website for getting Australian visas. I went up and couldn't make it work either and eventually they resorted to using a third party commercial agent to get one, which of course meant they paid a bit extra. Also of course, once they got to Australia, it seemed like no one was interested in their visa! (I suspect it's all electronic these days.)


Marie-France was determined to come home with some Vegemite that she could give me. When in Australia they amused their guide by persisting in asking her if they could stop off at a supermarket to buy Vegemite. The guide (a French woman married to an Australian) didn't take them very seriously and it took several days to achieve the mission. 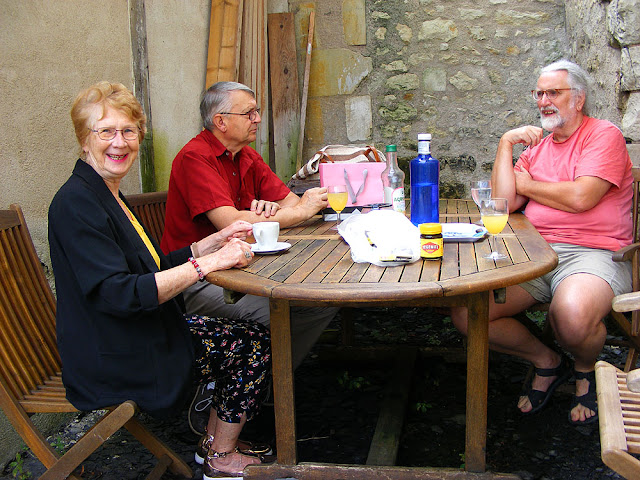 Marie-France, Gérard and Simon with a jar of Vegemite.

Once back in France they tried to set up a date with me to deliver the goods. Twice we had a date, and twice it fell through for one reason or another. Then on Friday, they were coming down our way to pick up their daughter in La Roche Posay, so they let me know they would call in that morning. They arrived at 9.10 am, just as I was vaccuuming in preparation. That set Marie-France off into hoots of laughter about being such an important guest, and in fact, it was much nicer outside at that hour, so we sat on the terrace for a cool drink and an account of their trip.


First we discussed the state of the middle garage at the back of our place. It's now owned by Franck from Lyon. He inherited it last year from his uncle, and doesn't really know what to do with it. He's been here twice for a day to try to clean it up and do some emergency repairs. On his last visit we discussed renting it from him to cover the cost of his insurance and property tax. That's a potential win-win while we both work on the finances and a plan for repairing the building.


Anyway, it turns out that Gérard is a model train enthusiast and in his youth, the train set was up in the loft of this garage. I told Marie-France that Simon would love to have a model train and her advice was not to let him start. Once it starts, there is no cure, and no end to the ordering bits online and visiting model shops. We now have an invitation to see Gérard's set up at home. Marie-France says that she is willing to claim they won't be home on the day if I let her know I don't want to take the risk of Simon suffering irreversible train envy.


Finally we got back to their trip. It began very badly indeed, with a problem with Gérard's US visa meaning that he was not allowed on the plane in Paris that would take them to the US. Marie-France had already gone through all the checks. They managed to get Gérard an emergency visa and on the same plane the next day, but it meant that he was chasing the tour for a couple of days before catching them in Las Vegas. They never found out what the problem was and had to pay for extra hotel nights and so on. Their guide didn't seem to care, and blamed them for messing up the visa application in some unspecified way. They are now using their legal action insurance (standard with all home insurance here) to make a claim via the national consumer watchdog organisation.


Luckily after that things improved and went smoothly, but in a couple of places they didn't really find their guide very good. Marie-France commented that she was disappointed with how little Aboriginal culture they were exposed to. They did get told all about Lapérouse though, and how close Australia came to being French. She loved the Opera House, the Bridge and Taronga Park Zoo (although she had hoped to see the Komodo Dragon there, but ran out of time). She also observed that it seemed that Australian pensions weren't very generous and work hours long. I suspect that Rotorua, in New Zealand was the highlight of the tour, despite the fact it rained all the time they were there. She also contrasted how much the Maori culture features in New Zealand compared to the Aboriginals in Australia. Bangkok was very humid, Pape'ete and Tahiti didn't get much of a mention (not so challenging I guess, as they are French speaking).


And you can see Simon's beautiful Vegemite sandwiches in this post.

Email ThisBlogThis!Share to TwitterShare to FacebookShare to Pinterest
Labels: Australia, Food and Drink, Our house in Preuilly