This year it was my turn to renew my passport. We made an appointment a month ago for 09.30 on Friday morning using the Australian Embassy in Paris website.  I had all the paperwork ready, and a couple of different set of photos, none of which I was happy with - not because of how much like a police ID parade they looked, but because Australian passport photos should be taken with spectacles on but no glare - something impossible in French photo booths (which instruct you to take all 'accessories' off, including glasses).


The embassy on Friday. Keen observers will note the only difference between
this and out last pic of the embassy is the roadworks have moved slightly 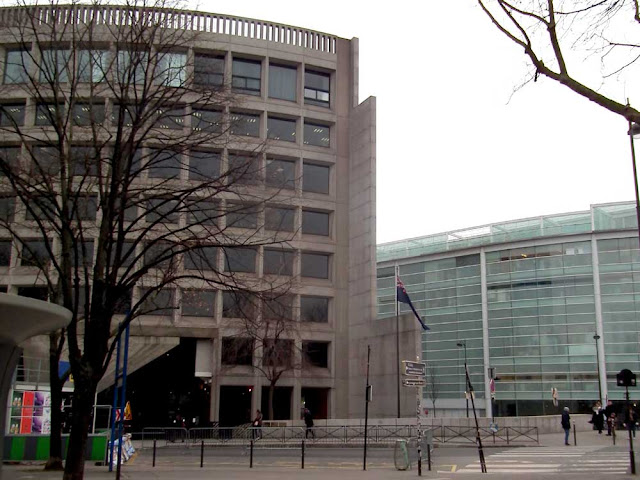 As I expected, the photos were rejected, but we were directed to a photo booth on Bir-Hakeim metro station and told that glasses off was OK. So we did that.

As a note to other Australians looking to renew a passport, we were told that as from tomorrow there should be a photo booth installed in the waiting room of consular services at the embassy. This means you should be able to take the guesswork out of your passport photos.

I'm renewing my American passport on the 23rd. So will visit the embassy in Paris. After last year renewing my other passport and having the photo rejection situation (desipte photos taken by a photographer to that country's requirements) I'm going to a photographer in a shopping gallery off the Champs Elysees said country recommended to all us who were rejected. They do photos for all the major countries and know all the different reqirements. Saves the hassle .... I hope

Walt was smart and had U.S. passport photos taken in the U.S. when he was there last spring. His next renewal is coming up. My understanding is that the U.S. embassy in Paris prefers to do renewals by mail, not in person. Check to see, but it might even be a requirement. I've renewed my passport by mail twice since we came to live here, by mail, and I've taken my own photos at home with digital cameras and printed them on inkjet photo paper. They've been accepted each time.

Apparently there is a photographer in Descartes who can do them and Rosemary uses one off Avenue de l'Opéra in Paris.

The British embassy does passport renewal by post too. For an Australian renewal it is a requirement that you turn up for an interview (which is an extremely informal affair once you are there). They hold sessions down south (in Nice) for those who have difficulty making it to Paris I believe (I got a message from the embassy to that effect, anyway).