The French consumer watchdog organisation UFC Que Choisir has investigated tap water quality throughout France and has established that 96% of communities have good quality, safe tap water, but that in a few, mainly rural, areas, the tap water is contaminated.

The pollutants are mainly nitrates and pesticides, which is why the polluted tap water hotspots are mainly in rural areas. Some of the contamination is due to aged water pipes, leading to high levels of  lead, copper, nickel or vinyl chloride. UFC Que Choisir tested for 50 different contaminants. 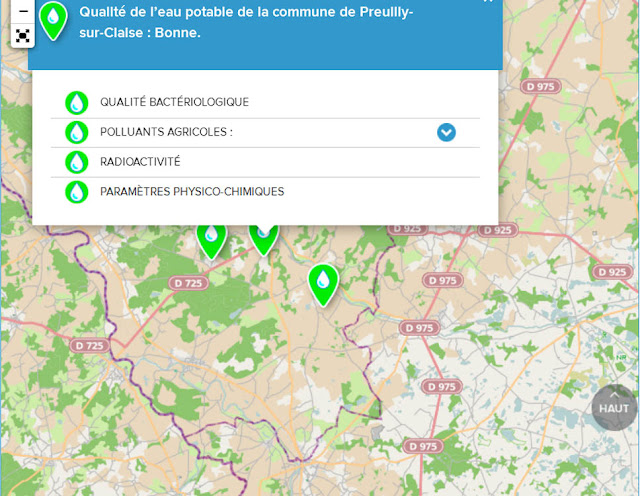 The aim of the investigation was to point out that tap water was safe, and far cheaper than bottled water. The vast majority of French households have perfectly safe tap water, but about half of French people drink bottled water rather than tap. Tap water costs an average of 0.004 centimes per litre, whereas bottled water is an average of 0.26 centimes per litre. UFC Que Choisir points out that certain bottled mineral waters are not recommended for daily consumption, because of their high level of fluorine, for example. They also calculate that bottled water contributes 360 times more to the greenhouse effect, travels and average of 300 kilometres and creates 150 000 tonnes of landfill every year.

Where there are problems with the water quality much of it will be the over and inappropriate use of fertilisers, with no respect for the regulations about distances from water courses. Although the study doesn't say so, I suspect an additional problem is that there are new chemicals in the environment that are extremely difficult to remove from water in a way that is compatible with managing a town water system.

Luckily, Preuilly's town water is fine. We had a scare during the June 2016 flood with bacteria, but our water is tested regularly by the council and they issue a report every year. The town controls and manages its own independent water supply and distribution at the moment, but under the new amalgamated Communauté des communes, I believe that the town will have until 2020 to decide which of the big water management companies it wishes to engage.

The community closest to us with contaminated water is Martizay. This small town apparently has an unacceptably high level of selenium in the water. Here's what UFC Que Choisir has to say about selenium: 'it is a component of deep rocks whose presence in water reveals the depletion of groundwater due to overuse, especially agricultural. Although this compound is toxic, its health consequences are poorly evaluated to date given the low levels to which the French population is exposed.'

Email ThisBlogThis!Share to TwitterShare to FacebookShare to Pinterest
Labels: Food and Drink, Maps, the Brenne

We were delighted to learn that Blois is in the greenest zone in a recent water pollution report.

What a pity that the town will lose control of it water supply.

I know. Generally these small locally managed systems are well run and it's a shame to get lost as part of one of the big guys.