We went up to Paris on the train on 8 February. Simon needed to renew his Australian passport and the classic car show Rétromobile was on so we stayed a few days in the big city.

We took the 'slow' train up, which pootles along the Loire Valley at a mere 200km per hour. This train has a number of carriages with old fashioned style compartments. We ended up in a compartment with another couple. He was reading the popular weekly satirical newspaper Le Canard enchaîné. 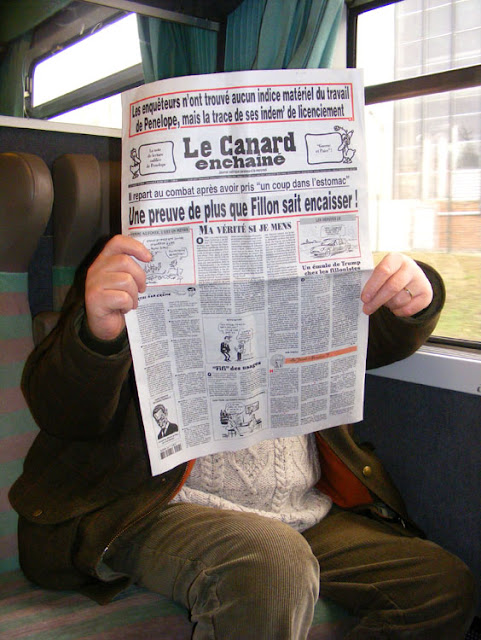 We got chatting and I felt confident enough to ask him to pose with the newspaper so I could photograph it/him. I thought it was a good opportunity to write about a paper that is a household name in France. It's the French equivalent of the British Private Eye or the American Onion. Curiously, there is no Australian equivalent that I am aware of.

The edition he was reading was particularly juicy. Presidential candidate François Fillon had just informed everyone that he had done nothing wrong by paying his wife tens of thousands of euros from public funds as his 'assistant', and what's more it's nobody else's business how much he chose to pay her. He is not going to renounce his candidature so his party can just put up and shut up is his attitude. Technically, apparently, this is true, in that what he did isn't illegal, but it has shocked and disappointed the French public to the core because it sure isn't in the spirit of public service, and he has campaigned as the 'squeaky clean corruption free' candidate.

The man on the train was disgusted with Fillon's behaviour, and disgusted that this sort of rort was even possible in France. He was sure it wouldn't be tolerated in Germany, Britain, wherever. The headlines in Le Canard enchaîné say things like 'the investigators found no material indication of Penelope doing any work, but there is a record of her redundancy payment', and 'one more proof that Fillon knows how to cash in!'.

Le Canard enchaîné is based in Paris and specialises in political and business investigative journalism. It was founded in 1915 and was a direct response to the closure due to censorship laws of Georges Clemenceau's paper L'Homme Libre. The name of the paper is a clever multiple word play, which can be interpreted as 'the censored paper' or 'the inside whisper'. Today the paper is non-aligned politically, anti-clerical and anti-aristocracy. It is fully funded by subscription, features a good number of satirical cartoons, some reporting on the arts and social issues and interviews (some real, some satirical inventions). The paper does not take advertisements and is privately owned (partly by the employees).  It pokes fun at anyone in public life, especially politicians, giving them nicknames and relies on anonymous sources who are clearly very well placed in government circles. Investigations carried out by Le Canard enchaîné in the past have included details of Paris Chief of Police Maurice Papon's role in the Holocaust and corruption during Jacques Chirac's time as mayor of Paris. As a result of the way it is run it is one of the most highly regarded, widely read and influential newspapers in France.

I have to admit, I don't read it. Satire is fun in small doses, but an entire newspaper devoted to the art is not my thing. Despite having immense respect for its longtime editor Ian Hislop, I didn't read Private Eye either, when we lived in England.

So, who is hidden behind this paper? A well educated, politically aware, middle class, interested and interesting, humorous, late middle aged French man, a good sport about being photographed with his newspaper of choice, with a daughter who lives in Cirencester (England) and who was travelling to Paris on the train with his wife. He took my business card and checked out Days on the Claise on the spot! I really enjoyed meeting him and his wife and it made the train journey much more fun.

That was a good post. I adore your classic Citroens. We bought a new C4 when we arrived just under three months ago as we'd heard one really needs a car in these parts. So true. No, there is no paper like Le Canard enchaine in Australia, what little political satire exists you see on the ABC from time to time. Murdoch has a stranglehold on the press, as you know, and his papers are rags you wouldn't even wipe your you-know-where with. At least in France there is a diversity of opinion and a certain political/social maturity ... sadly lacking in Australia. I too have a blog ... check it out if you have time ... goldenageinfrance.blogspot.fr
Cheers
Tony Hull (ex Adelaide)

It's good to meet/talk to people on a train. Did he have any views on Brexit with his daughter being in the UK?

What really struck me about the Penelope Fillon story was that she received severance pay after leaving a job at which she apparently did nothing. Or was that fake news from Le Canard? I think I read it in The Guardian.

Yes, you are right. There are a couple of really good satirists on the ABC. And yes you need a car. We didn't need one in the UK, but we would find life a lot more complicated without one here. I've checked out your blog and will be reading more.

Only the usual stuff -- it will be as much a pain in the neck for her as it will be for us. The really spooky thing was that a few days later I was listening to the Kitchen Cabinet on BBC Radio 4 and it was in Cirencester. A French woman got up and asked a question. What do you reckon the chances are that it was the daughter? I know from my conversation with him that she is quite a foodie.

No, that's not fake news. Le Canard enchainé has unearthed the whole gamut of financial inappropriateness, and the investigation is not going to be dropped by the authorities. Fillon continues to tough it out.

There's a cartoon today in a newspaper from Mortagne au Perche that I read online. The basis for the cartoon is that some local people had been cheated by a fake phone company. Here's a link.

Hmm...a bit lame? Maybe it's because I'm not French?

I lost my respect for Fillon when i saw the amount she was paid for doing ZILCH! Yes, she was trained as a lawyer but this does not mean that a spouse helping her politico husband in some administrative and campaigning work should be paid as such whilst some hardworking professionals, with university education, were not even making that much per month. What made it worse was when he defended the amount paid to his two children when they worked for him as students (paid as a professional)

Should read " I lost respect for…)

Perhaps the lack of political satire in print in Australia reflects the lack of both a bill of rights and an explicit right to freedom of speech in the Australian constitution.

John Clarke and Bryan Dawe are pretty savage, and have been for the best part of 30 years.

Spooky. You could right.