Save the Ceramic Panels in Tours Station!

Anyone who has entered the station in central Tours will have noticed the 18 picture panels made of ceramic tiles that decorate the walls and entice travellers to destinations south and west.  Heritage listed since 1987 they've adorned the walls of the station since 1898, and now they are at risk. SNCF wants to restore them but can't justify spending the money, so Patrimoine-Environnement has set up a crowd-funding site to raise the money needed.

For the leading railway companies of the time, these panels enriched the station surroundings and influenced travellers. The panels are 1.2m wide by 2.1m high, made from painted and glazed square ceramic tiles. One of the artists who created them was the potter and theatre set designer Eugène Martial Simas, working in close collaboration with the factories of Sarreguemines and Digouin.

The panels themselves, and their method of fabrication, are rare and unusual. Stylistically they are a sort of meeting of Impressionism, photography and Art Nouveau. Simas outlines his subjects with a couple of lively brush strokes and broad sweeping curves, filled in with soft colours and accents inspired by Japanese art. This is particularly notable on the landscapes done in successive planes in tones of sepia, sea green and sky blue, with pairs of two toned figures to provide contrast, depth and clarity.

The panels have been subjected to the degradations of time and air pollution in the station. The original lime mortar which fixes the tiles to the walls is crumbling and is no longer stuck to the painted tiles, which are coming loose and threatening to fall and smash. In addition, the soot produced inside the main hall by over a century of steam and then diesel locomotives has badly scratched the painted tiles. A recent test cleaning has revealed how fresh and colourful they could look. 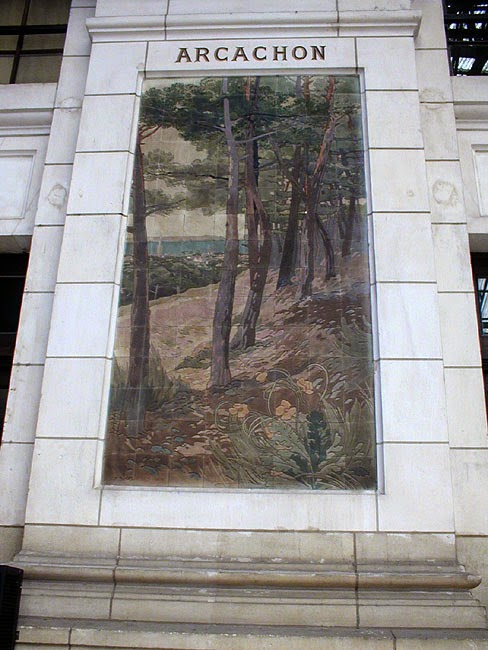 The current crowd-sourcing campaign is aimed at raising the money to restore the first of these 18 panels at a local ceramics conservation studio. Situated in a stone frame in the middle of the eastern facade, 2.33m above the floor, the Arcachon panel, typical of the attractive invitation to travel these pictures represent, has been chosen. The composition of plants, seaside and built landscapes, with its depth of field and the subtle movement of the pines presaging Art Nouveau, the fineness of patterns and colors, the detail of the low growing vegetation, transports us into a world that is both real and imaginary.

The panel bears the signature 'M. Simas' at lower left, and the manufacturer's stamp 'UC / Paris/Digoin' and is composed of 120 fifteen centimetre square tiles, 1.3cm thick. Each tile weighs 520g and the whole panel 62.4kg. Some traces of its history are visible -- patches of abrasion and scrapes; scratches and moulds; the glaze is lifting in places; one square has been touched up with wood paint; another has been broken and a third is cracked; and the tiles on the edges are coming unstuck. 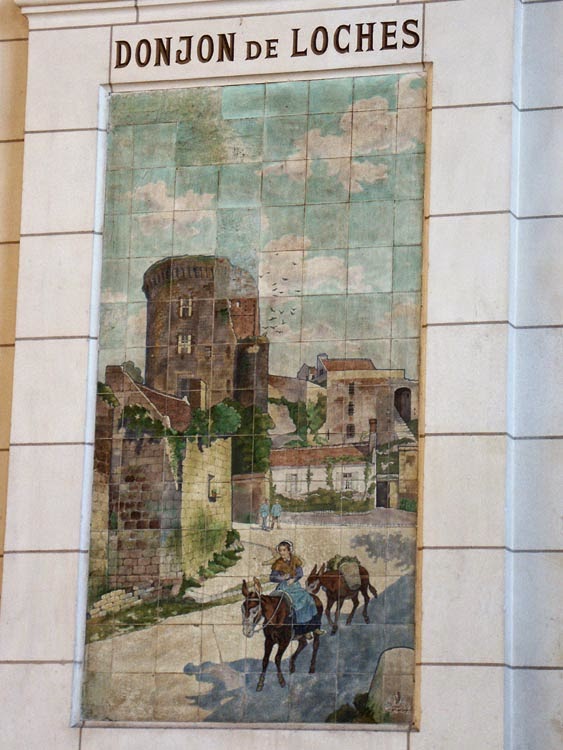 The panels need to be cleaned and consolidated, and it's hoped to complete the project under the more general auspices of the upgrading and restoration of the station that has been going on in the last few years. There is a lot of public affection and interest in these panels, which is why the crowd-funding approach is being trialled. It is hoped that individuals and businesses will give generously in order to save these rather special works of art.

Donations are tax deductible if you are a French taxpayer. For example, if you make a donation of €15, after your 66% tax rebate your actual outlay will amount to €5.10. For a donation of that amount you will be thanked publicly on Patrimoine-Environnement's Facebook page, for bigger donations you could get your name on the benefactors list in the station, receive a certificate acknowledging your gift, a guided tour of the station with an architect, visit the conservator's workshop, be invited to the unveiling of the restored panel or even get up onto the roof of the station.

There are only 19 days left to donate for the Arcachon panel, and to do so, please go to Ulule - Gare Tours.

*************************************************
An Overview of Neonics and Their Effect on Pollinators:  An important paper pulling together European research into the effects of neonicitinoidal insecticides on pollinating insects was published this year in the Proceedings of the Royal Society. It is purposefully written in layman's language, in as neutral a tone as possible. Personally I think all stakeholders, from farmers to ecologists, and interested persons should read this document carefully. It says, among other things:
None of which is to say that neonics are not a problem. The problem is lack of robust and replicable evidence, mainly due to the difficulty of designing and running field trials which will tell us anything meaningful. A similar review of the evidence came to the conclusion that: “The combination of prophylactic use, persistence, mobility, systemic properties and chronic toxicity [of neonicotinoids] is predicted to result in substantial impacts on biodiversity and ecosystem functioning”.

A la cuisine hier: Three jars of grape jelly, and about a cup of molten grape jelly all over the stove top when the wretched stuff boiled over. Grape jelly goes well with game, foie gras or on toast. It's a great way to use up the last of the Black Hamburg grapes from the orchard. Grape seeds have lots of pectin, so there is no problem with it setting.
Posted by Susan at 09:00

I personally think that it is neonics that are causing the "cleg" species to move so slowly this year...
[probably from usage up at Grandmont on his cattle???]
It is not something we've ever noticed before....
normally you have to chase them around the window with the swat...
this year I have been able to squash all of them with my thumb...
even the two big Tabanids [bovinus and sudeticus]....
fine, it makes less mess on the window...
but if I can do it, it will also make it much easier for the birds to catch them...
so what effect is it having on the long distance migrators?

Those panels are beautiful and each one is unique! Surely there is a national duty to save them.

Tim: If it is neonics the likely culprit is Thiamexotham. It is still used to coat canola seeds prophylactically as it is not one of the 3 neonics banned under the current EU moratorium. It is also used to control flies in livestock operations. Personally I think the main problem with neonics is that they are used prophylactically, so their presence in water and soil builds up quite rapidly. As Dave Goulson keeps saying -- whatever happened to Integrated Pest Management?!...

PG: I agree, and I am ambivalent about crowd-funding in this sort of circumstance. These are attractive enough to raise the money, but it allows the government and actual owners a cop out.

I've never been to Tours station. Those panels are lovely.

LDP: Well worth popping to the station just to see the panels if you are in the middle of town one day.