Dragons Past and Present

Above a Ring-tailed Dragon Ctenophorus caudicinctus, blending in to its surroundings.
Below, lizard footprints in the sand.

Fossilised lizard tracks on the escarpment of Kings Canyon, not far from where I took the previous photo. 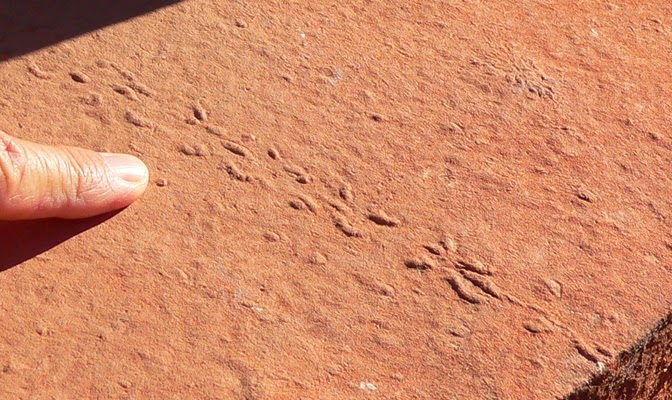 Me, my brother in law John and sister Kathy, gazing in wonder at the fossilised lizard tracks. 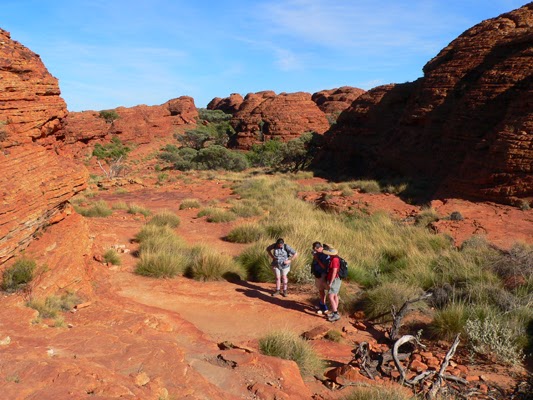 **************************************************
Gough is Gone: Gough Whitlam died on Tuesday. For Australians he is a household name, but I'm not sure how many people outside the country would recall him. For someone my age he is easily the most charismatic and memorable Australian Prime Minister. Enormously tall and patrician, educated in the old style as a classicist, he enlivened the political scene during my teenage years. He is one of a very small number of politicians who had a reforming zeal and actually succeeding in changing things for the better. His judgement and timing sometimes let him down, economics was his weak point, but mostly he was inspiringly energetic, liberal minded, enlightened and forward thinking.

As far as I can tell the current Prime Minister is trying to undo all of these things.

Medical News: I seem to have developed Achenbach Syndrome. I've self diagnosed, as one does these days, on the internet, and I won't be bothering the doctor with it. I emailed my family to see if they had experienced anything like my symptoms and they've all had it for years apparently (Dad, aunt, sister).

Basically, small veins in my joints (usually the fingers) burst occasionally, causing a burning pain for about half an hour, a bit of swelling and a bruise which reabsorbs within a day or two. Usually it happens when you are not doing anything which might logically provoke it (my lastest episode was when I was opening the microwave). My reading suggests it is a trivial condition which doesn't indicate anything serious (although my aunt complains it's a nuisance when you are playing golf...). It's not connected to wider cardio-vascular diseases for instance. It is often referred to as rare, but rarely reported is closer to the mark is my impression.

***************************************
From Forest to Frying Pan: Yesterday we went on a long walk in the Forest of Preuilly with friends Tim and Gaynor, Colin and Elizabeth. Along the way we encountered many mushrooms. I took four home, giving me a kilo of ceps which I cooked up that night. We didn't want to eat them last night as I had something else prepared, but I figured it was best to cook them. Wild ceps are notorious for being maggot ridden and leaving them overnight can result in a mass hatching. As it turned out only one of the mushrooms was fly blown and discarded. We'll eat them in omelette and I'll add some to the leftover blanquette de veau.
Posted by Susan at 09:00

I'd say that the legacy of Gough Whitlam was a pretty impressive one.

Gough Whitlam is the only Australian PM that I could have named if asked prior to this week...
and still is...
although I can recognise the weasely face of the current incumbent...
can't remember his name tho'...
despite following events over the missing Malaysian jet.
I think that proves Gaynor's point.
Student fees, the Great Barrier Reef and environmental protection are probably why...
That's a great quote, tho!!

I love the fozzil lizzard printzz...
how on earth did you spot them at that size...
probably needn't ask...
you walk with your eyes wide open...
how many people tho', I wonder, walk on them without seeing them as they walk that trail??
Or are you off-piste as it were?

Sorry to hear about the blood vessels...
but you don't play golf...
do you?

Gaynor: Even those implacably opposed to him acknowledged that he was impressive.

Tim: I'm a bit surprised Gough is the one you can name -- I would have expected Paul Keating to be the one who resonated with Brits.

I think the lizard prints are reasonably well known, and I think at least some of my family had been here before so pointed them out(Dad and Mum probably).

If I heard the name Gough Whitlam I would say "Australian Prime Minister". He was clearly letting some fresh air into Australian politics. Paul Keating? I would say "name rings a bell - rugby player?"

Same with me... the name just doesn't ring any bells at all...
not even rugby player!!

Tim: Look him up then -- he's an interesting man. It took me a long time to appreciate him, as he's not very likeable, but he was a conviction Labour politician, from a genuinely grassroots background.

Have done...
he was quite a lad!
A very interesting and far seeing person who seems to have had the drive to do something about it...
and still seems to be doing so...
like many true statesmen who can speak their mind once "party politics" has faded of their radar!!
I love the "flogged with a warm lettuce" quote I've just read...
one of the best put-downs I've come across!!
As to whether or not I'll remember his name... not sure?