A Bit of a Stink

Don't be surprised if you encounter what appear to be flying iridescent black marbles in the woods at this time of year. If you see one, you are likely to see several, if not dozens, all heading in the same direction in a crazy out of control sort of way.


A crowd of Dor Beetles and other coprophagous
insects working on dung in the Brenne. 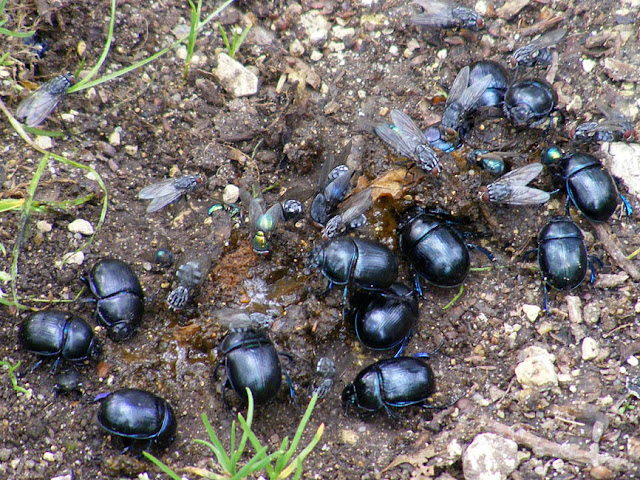 These are Dor Beetles Geotrupes sp, Europe's largest earth-boring scarab, and they are speeding to the latest bovine deposit, irrestistibly attracted by the smell wafting through the air. Once they've arrived at the source of the aroma, usually a nice fresh cowpat on the edge of the forest, they set to work digging and burying the precious manure. Ever noticed that cowpats are pitted with small holes? Well that is the work of these beetles, taking down pieces of dung into the ground. Both the adult beetles and their larvae eat dung.

They will lay their eggs in the middle of a lump of dung 20-60 cm underground. In time the larvae will hatch into the midst of a ready meal. What they don't eat and what they excrete goes on to be further broken down by fungi and bacteria and fertilizes the surrounding vegetation. Without these marvellous beetles we would be knee deep in excrement in no time flat.

Sadly, their numbers are declining, as almost all cattle are treated with ivermectin, a chemical administered to control worms in the guts of domestic grazing animals. Unfortunately, the still active ivermectin is subsequently expelled along with all the incompletely digested grass and hay. Unknowingly, the adult Dor Beetles are poisoning their young by providing them with contaminated dung.*[see update]


A close up of the action. Along with Cockchafers, also in decline because of modern agricultural pesticides, the Dor Beetles are a major prey species for Greater Horseshoe Bats, and the decline in the beetles is leading to a decline in the bat population.

Although Dor Beetles are Geotrupidae, rather than Scarabaeinae like true dung beetles, their role in the landscape is very similar. As Alex Wild points out on his fantastic blog Myrmecos, 'there are as many species of dung beetle as mammals. Think about that!' And if you need a bit of laugh (don't read while eating your lunch, btw) Bug Girl wants to know if that stool is taken. I can remember my father receiving little boxes of dung beetles for distribution around our cattle paddocks in Victoria in the 60s, and for a more serious look at the introduction of non-native dung beetles (including 2 French species) to Australia to deal with the non-native cattle dung, check out 'What to do with too much poo' in Cosmos.

*Update: my father has emailed me to point out that I have been somewhat cavalier in my condemnation of ivermectin. For a start, I should have referred to avermectin, which is the active ingredient in question. Ivermectin is the brand name of the most well known product containing avermectin. Secondly, the jury is still out regarding how much of a problem avermectin is in the field. It seems to be complicated, with different toxicities at different times for different species in different places. Here are some links to scholarly papers on the subject: Field Effects of Ivermectin Residues on Dung Beetles (Lumaret et al, 1993); Dung Beetles (Coleoptera: Scarabaeidae and Geotrupidae) in North Carolina Pasture Ecosystem (Lastro, 2006); Dung Beetles (Coleoptera: Scarabaeidae and Geotrupidae) in North Carolina Cattle Pastures and their Implications for Pasture Improvement (Berthone, 2004).
Posted by Susan at 09:00

For millennia, man has lived in harmony with nature. Since the advent of the industrial revolution, that delicate balance has tipped over at an always increasing speed. I wonder if, in the long run, nature will prevail?

Although not understanding many of the words used, I quite enjoyed your post Susan. I'm about to now searching the meaning of the words. I may become better educated. Amazing photo. Love the way you get down and dirty. Great post.
Leon

What a rich lump of dung...
I've never seen so many Dumble-Dors [East Anglian name for Dor Beetles] in one place...
I agree with CHM about Man's ever increasing "scientific" intervention in the environment...
but She's been knocked about far too many times...
Mount St. Helens took off sideways just to show us what She can do...
I feel that Gaia will recover very well...
but it will be at our cost!!

I think it's modern technology but also just sheer numbers of people that are having the greatest negative effects on Nature. Imagine all the cars, all the houses being heated and air-conditioned, and on and on.

I love these beetles ...