Wildlife Watching in February in the Touraine du Sud 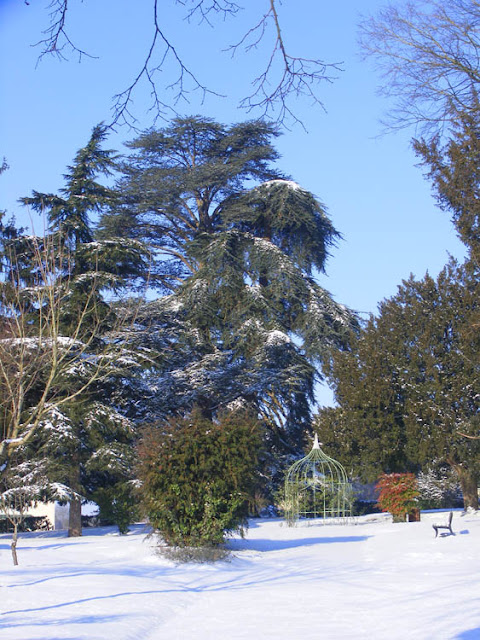 Snow on the arboretum in Preuilly, 7 February 2012.

February is generally the coldest month of the year here. This is the month we usually get at least a few flurries of snow, even if there has been none earlier in the winter. 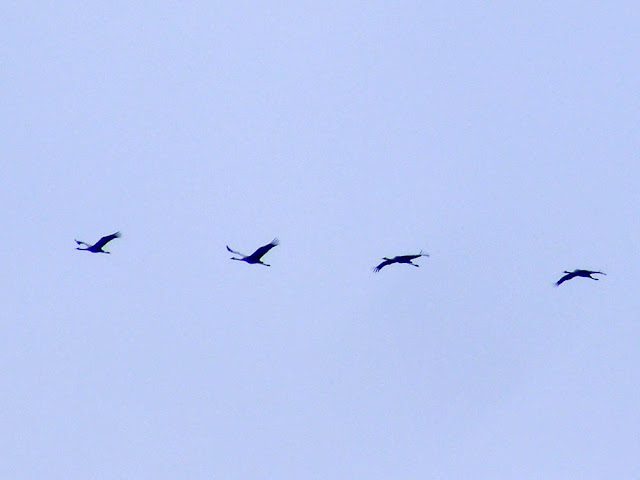 Cranes flying north on 24 February 2012, photographed from our orchard.

It's also the month we get our first real sign of spring, as the cranes come back from their wintering grounds in Spain and north Africa to join the great breeding flocks in northern Europe. Listen out for their raucous calls as they fly over in formation.
Posted by Susan at 09:00

Gaynor, you really wouldn't have wanted to be here today... even the fish were using aqualungs!!
The weather station has been connected to this laptop since I got up... we recorded 20.4mm for yesterday and watched the bief [millstream] rise steadily all day... as the rain hasn't yet finished it is probably still rising!
All the fields around are once again shallow, brown ponds.
So far this year we've recorded 80mm of rain here...
Pauline's looking to see if there is a rice we can plant!!

Susan, do you feed the birds in winter? Our previous owners did but we're been told it's not a good idea because it makes the bird rely on outside sources.

Fraussie: We don't in terms of supplementary feeding. We did in London. There are several reasons we don't in France -- there are lots of hunting cats in our neighbourhood so I am reluctant to set up a buffet for them; I have yet to identify a source of quality bird food here; just haven't got round to setting up the feeders at the house. If you choose to feed you must do it all the time ie every day, all year, or not at all. This is because your feed will support a larger population of birds than would have been there without, so you must take responsibility for maintaining the population gain. I have no problems with supplementary feeding of birds and in general would support it. There are disadvantages -- you have to be very careful about hygiene -- it's very easy to kill off your garden birds through the feeders not being clean or the feed getting toxic fungi. You will attract rats -- we always had rats in London, and at one stage they got into the house. Feeding birds only supports certain species, most of which are good generalist survivors anyway. Feeding is good, but is not the only thing you can do to support your local birds -- I found in London that the thing that attracted new birds to the garden was not the feed, but the water, so have several sources of water in the garden. Also put up nest boxes of different designs. In general, don't keep the garden too tidy, leave shrubs a bit wild in places, leave piles of logs or stones, plant flowers that insects like, make sure you have invertebrate habitat so birds can feed their young.