In the last week or so there have been two disturbing announcements in the French national news. At any rate, they are disturbing if you are interested in the preservation of the natural environment, as both of them appear to pit the environment against economics. It's fairly old-school and unimaginative economics though, and all very convenient if you are not interested in the natural environment. No concept that nature will reward you if you work with it rather than against, no concept that nature is anything other than a freely available resource to ruthlessly exploited on the one hand, or an inconvenience to be equally ruthlessly exterminated on the other. 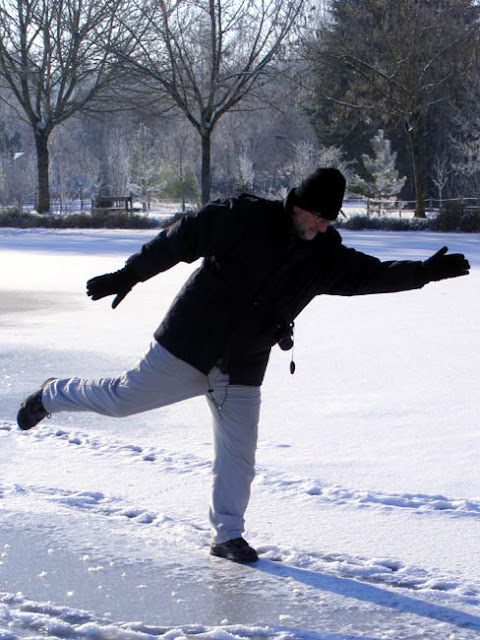 Sorry, best I could do in terms of a skiing picture...

The first is that the mountain commune of Courchevel has decided to withdraw from the Parc national de la Vanoise. The local authorities view the national park partnership charter as interfering with their plans to improve and develop the famous ski fields there.

The law in France requires that each commune (local authority) chooses individually whether to sign up to the charter for a national park or a national nature reserve. It is not uncommon for parks to be donut shaped, with a commune inside the outer boundary of the park exempting itself from the park. The Brenne, just to the east of us, was in that situation for years.

National parks here are not really wilderness areas -- people live and work in them, and have to be taken account of in any management plan. They are as much a part of the park as the animals, landscape and wild flowers. Often it is the actions of man which have created the particular importance of the area.

Many French commentators (and I agree with them) can't help feeling that Courchevel's attitude is short sighted in the extreme, however. For one thing, the national park gives them access to a stream of funding that they will now have cut themselves off from, and they will have to stop proclaiming themselves as the heart of the national park. Will investment in a ski industry be forthcoming? What is the future of the French ski fields anyway, in a climate change situation? I also have questions about how well managed the ski tourist industry is in France -- they appear to be losing out to newer, cheaper, more service oriented and consumer friendly ski fields, especially in eastern Europe. 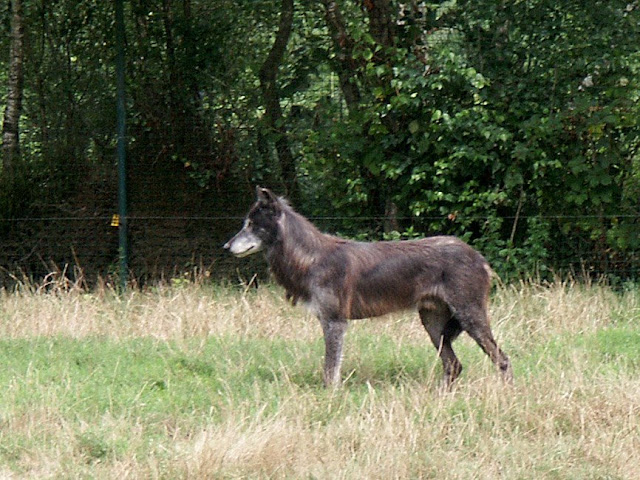 A wolf at the Réserve de la Haute-Touche.

The second piece of news is that the Groupe National Loup (the interdisciplinary group responsible for making policy concerning the conservation and management of wild wolves in France, sometimes referred to in English as 'the wolf parliament') has announced that it will allow the killing and/or removal of more wolves in sheep farming areas. The current policy is to compensate farmers if wolves kill sheep, and only to kill the wolf as a last resort (if a wolf repeatedly kills sheep, usually).

They have announced that the government cannot continue to pay out large sums to placate farmers in these economically straitened times, so more wolves will have to die. As one of the French commentators put it: 'Yeah, right -- we've got 200 wolves in France, and if the country goes broke it will be their fault!' (About 5000 sheep were reported as killed by wolves last year, so that's about three quarters of a million euros paid in compensation. Wolf attacks on sheep appear to be rapidly escalating, but there does not appear to be any discussion of the possibility that some attacks may in fact be perpetrated by the estimated 8000 feral dogs living in the same territory.)

As a sop to the conservationists, the Groupe has now announced that if possible, renegade wolves will be captured and held in research facilities (such as our local captive breeding zoo, La Haute-Touche) rather than killed. How this doesn't cost as much as compensating farmers I'm not sure.

They are also talking about re-education programmes for wolves ie teaching them not to attack domestic flocks. This principally consists of allowing shepherds to fire warning shots at wolves that get too close. Shepherds must apply in advance for permission to engage in tirs éducatifs, and are specifically forbidden to track down wolves in order to 're-educate' them. By this means they hope to create 'zones of exclusion'.

It is a big problem in the communities that pasture their sheep within the Parc national de la Cévennes, a seeming incompatibility between biodiversity and small scale traditional farming. The farmers are faced with losses that are proportionally very high because they have such small flocks -- losing 10 sheep (not uncommonly reported) is a significant loss if your flock is small (average around 350 beasts). To combat the wolves they are taking on extra staff and installing specially trained dogs that live with the flocks to protect them (2 dogs can hold off a pack of 9 wolves apparently). No wonder the shepherds are no great advocates for the wild wolf.

Nevertheless, it seems the antipathy to the wolf's return is much greater in France than in Italy, where the wolf numbers are far higher and the lifestyle just as traditional.

To read more about wolves in France go to my entry on them in Loire Valley Nature.

Aren't they being tempted by those rich ( well temporarily I would say) developers and nouvelles fortunes who want to build monster chalet with underground garages like in some Swiss ski villages and hamlets?

Unfortunately those with money are always on the move . In ten yrs Courchevel may not be the "in" place and the Mairie will be wondering how they can bring in more funds.

Beaver: I'd say Courchevel already isn't really the in place. I'd say the bulk of the money is in Austria at the moment, and ready to move to Bosnia and Bulgaria at the drop of a hat.

There's still a fair bit of 'money' in Courcheval, but it's the kind of money that goes in the winter and doesn't see the slopes in summer. In summer one can see the extent of the damage to the mountains to create the kind of pistes and lift systems which ensure the skier isn't too tired to enjoy the after-ski!

As a skier, who also enjoys the mountains in the smmer, I'm saddened, but not surprised. Courcheval has to compete with resorts which have fewer restrictions placed on them

Gaynor: I'm glad you commented, as your personal observation is valuable. I find it maddening the way the ski resorts only focus on the winter, and appear to have no idea that people might visit in the summer too.