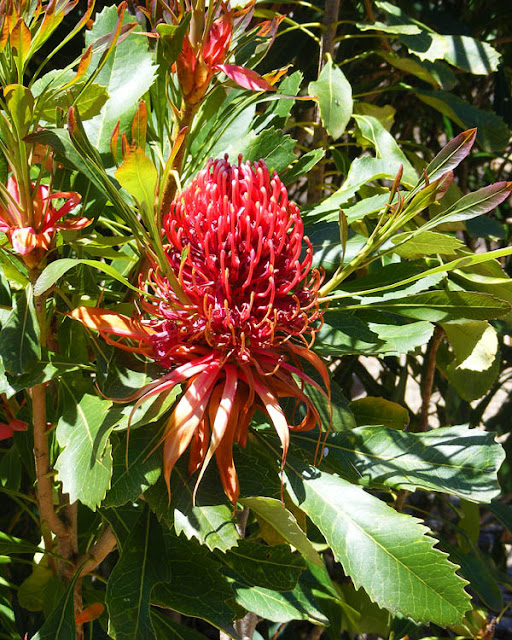 This lovely New South Wales Waratah Telopea speciosissima, the state flower of New South Wales, was flowering in the Australian National Botanic Gardens when I visited in November. A member of the Proteaceae family, waratahs are native to the eastern seaboard of Australia. They are so spectacular that, although initially they were thought to be difficult to cultivate, they are now a popular garden plant and cut flower. One of the roles of the ANBG is to work with garden worthy native plants and develop an understanding of how to propagate and cultivate them, which can be passed on to commercial growers and the public. Their fact sheet for Waratah is here. In the wild the species relies on periodic bushfires to successfully germinate seeds in the open areas created by the burn. Waratah is an Aboriginal word. The New South Wales Rugby team is called the Waratahs.

Email ThisBlogThis!Share to TwitterShare to FacebookShare to Pinterest
Labels: Australia, Gardens and Parks, nature and wildlife

Lucie: yes, it's rather sweet that the rugby team is named after the flower :-)

I'll bet the name for the3 rugby team belies their nature.

Sorry about the bakery, though.