A large female absorbs warmth from a rock on the shoreline at Manly. 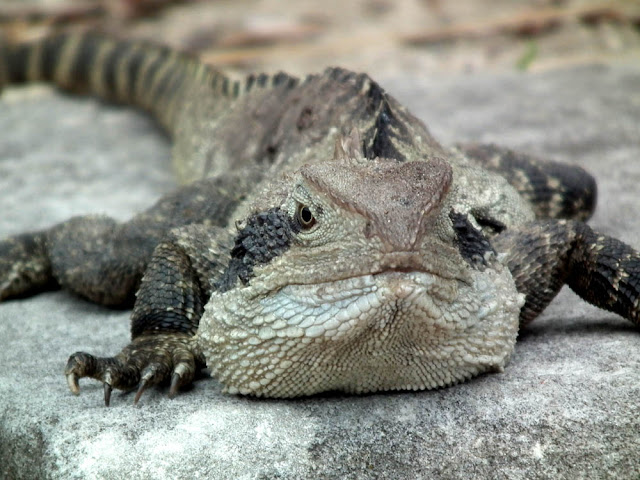 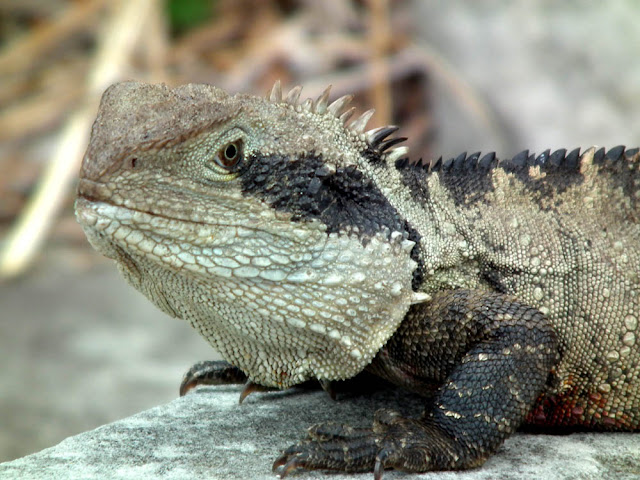 In both places the dragons are considered an attraction and visitors are encouraged to spot them. In Manly in particular, it is clear that the local population has adopted these rather formidable looking lizards. Whenever we stopped to watch and photograph a dragon there, a passing local would step up and tell us about them. Even blokes sitting on park benches with cans of beer knew all about them and were clearly proud of them. We learnt what they ate, where to see them and how to tell male from female, all from random locals who saw we were interested.


A young adult Eastern Water Dragon, showing the pattern on its back. 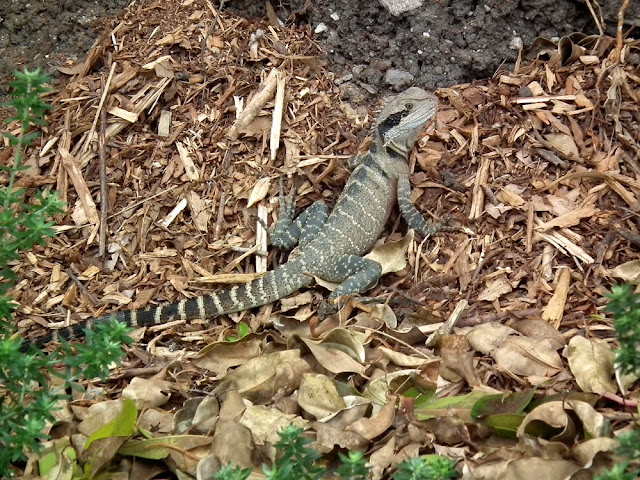 We were told several times in our discussions that it was not permitted to handle them. With us, they were simply imparting a piece of information along with many other snippets about the creatures, and we were not being suspected of disturbing the dragons. Our friend Stefania, however, who is a qualified eco-guide specialising in marine mammals tours for French and Italian visitors, told us that she had a French client recently who picked one up and was most put out when she very firmly told him to put it down and leave it alone or there would be consequences. The lizards may be on show and familiar with being in close proximity to people, but they are not zoo animals and they are not pets. The cliffs are steep here and they can decide just how close to people they get. Like all reptiles in Australia, they are protected by law and there is a fine for stealing, handling or disturbing them.


A male Eastern Water Dragon, showing the very contrasting light and dark markings that distinguish this subspecies from the Gippsland Water Dragons. 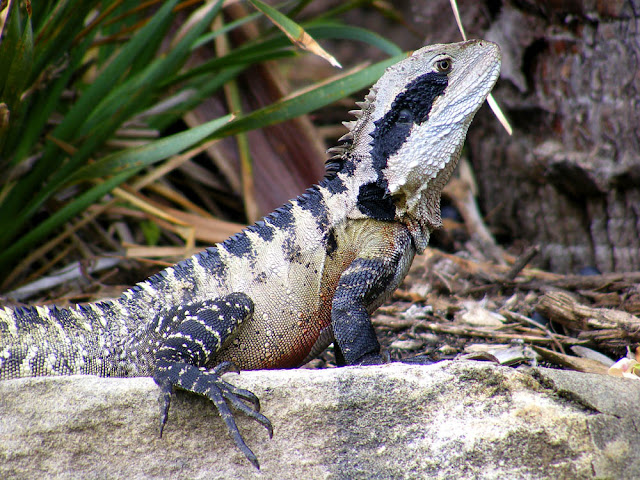 The Water Dragons are the largest species in the Agamidae family of lizards, and can reach a metre long. The holotype (ie the original specimen which was used to write the official description of the species and to which a scientific name was formally assigned) is kept at the Muséum national d'histoire naturelle in Paris, and is named after Charles Alexandre Lesueur, the naturalist aboard Nicolas Baudin's early 19th century French expedition to Australia, who collected the specimen.


A crowd of interested passersby gathers to watch and photograph a dragon at Manly, keeping a respectful distance so as not to disturb it. 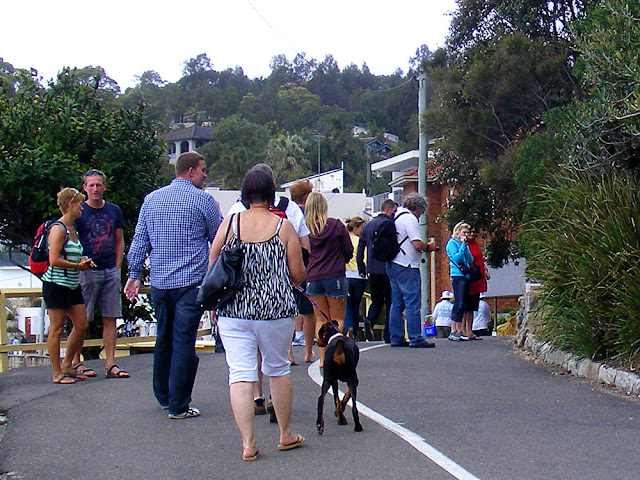 Their main predators are snakes, but cats, dogs and foxes can also harm them, and birds like Kookaburras will take young ones. They get run over quite a lot, as they like to bask on warm bitumen, and the Botanic Gardens has recorded at least one instance of one with a broken back after a kid threw a rock at it.


We were told exactly where we would find this magnificent male by a local who stopped to talk to us. 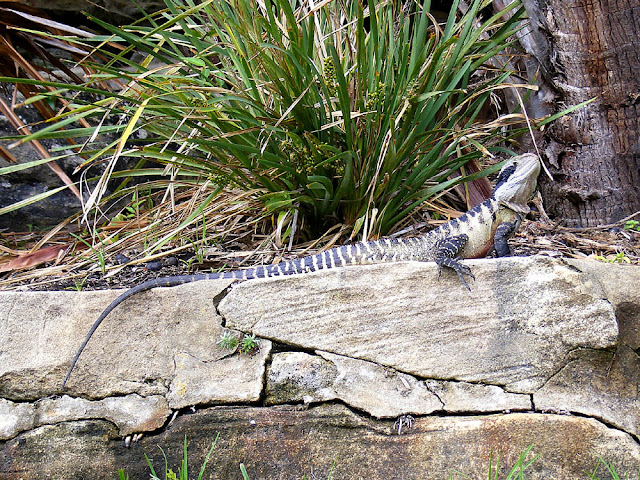 The female digs a hole in the ground and lay eggs in the spring. The eggs are covered with earth and leaf litter to insulate and camouflage them. Depending on the temperature of the nest, she may produce a predominance of males (if the nest is warm) or females (if the nest is hot or cool).


Totally camouflaged -- and that's even after I've upped the contrast a bit in Photoshop. 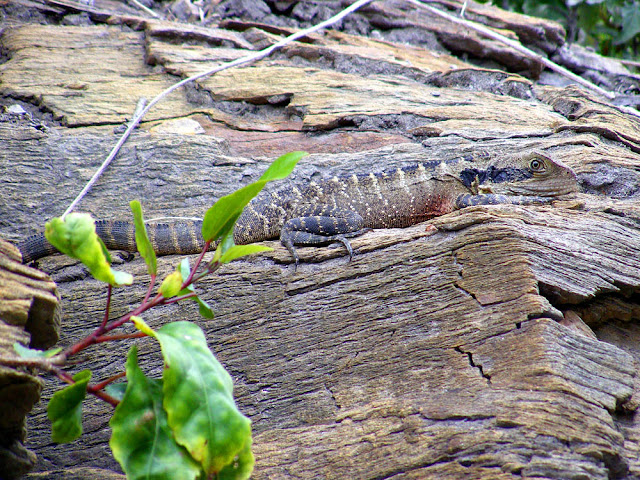 They are semi-aquatic and always live near water. They will feed on land or in the water, and they often use water as a refuge if disturbed. They eat almost anything (including the tomato from your hamburger, according to our new friend on the park bench with the can of beer).

If you want to know more, the ANBG has produced an FAQ page on their website, and the Australian Museum has an excellent page on them. 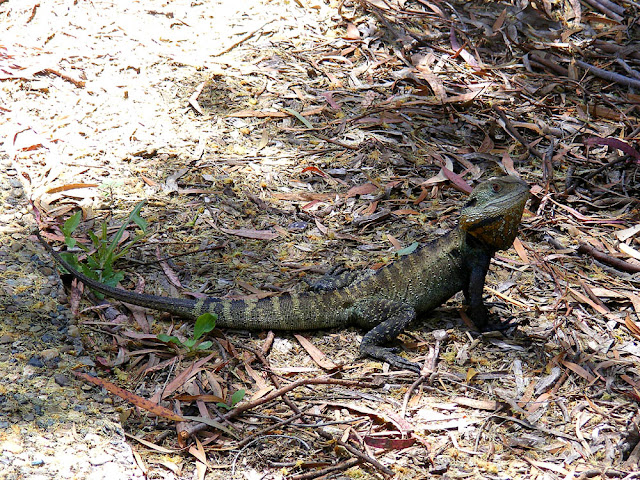 These notices appear at intervals along the coastal walk around Manly, and clearly have the support of the locals, who seem to act as self-appointed guardians in a thoroughly heartening way. 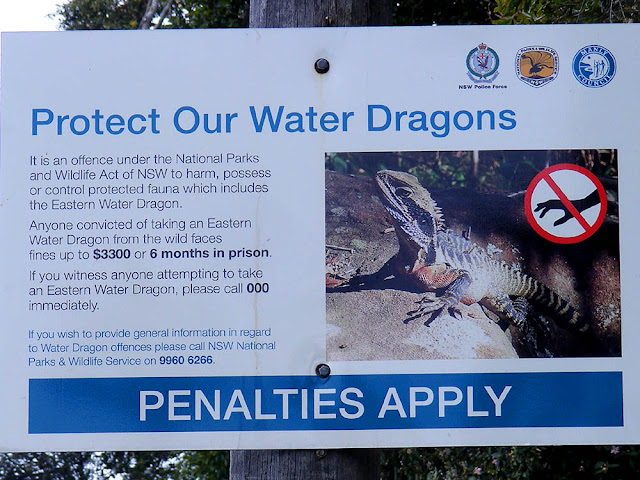 This small dragon was not old enough to be digging a nest, but instead we think was hunting for ants and eating them. (That's me and Stefania talking in the background.)
Posted by Susan at 09:00

Great post and pics. Love the camouflaged on the rocks.

Great markings on the Manly dragons, think they look quite beautiful in an odd way. How nice the locals act as guardians & ambassadors.

Are they in any way related to the Komodo Dragon? Are they larger?

I've got a weak spot for reptiles. One of the highlights of Italy and California was lizards on the walls. Didn't know Australia had those.

chm: they are much smaller than Komodo dragons and not closely related.

Ant: I was really impressed at how the locals have adopted them.

Sheila: glad you liked them.

Pearl: I like lizards too. Australia has lots of species.

Great pics Susan, I took Finn to the Roma Street parklands a few weeks ago (Brisbane) and there were lots hanging about the kids playground area, which isn't far from the creek.
They would come to within 2 feet of the children, waiting for toddlers to drop food and older kids to share fruit leftovers.
Most Mums insisted on no chasing.

Lucie: For me, this is rather a new phenomenon, a change for the better that has come about since we left 15+ years ago.

Margaret: good to hear that kids are being educated to respect the wildlife.