While in Canberra in November I visited the Australian National Botanic Gardens with my sister-in-law Rosy's mum. She is a recently widowed retired plant physiologist, and was delighted to have an excuse for an outing to the Gardens.

We started by checking out the excellent visitor centre shop, but when we came out we noticed a bird on the pavement, clearly in distress. It was a juvenile Red Wattlebird Anthochaera carunculata, lying on its side in a most unnatural way, arching its spine and jerking as though it were having a fit. 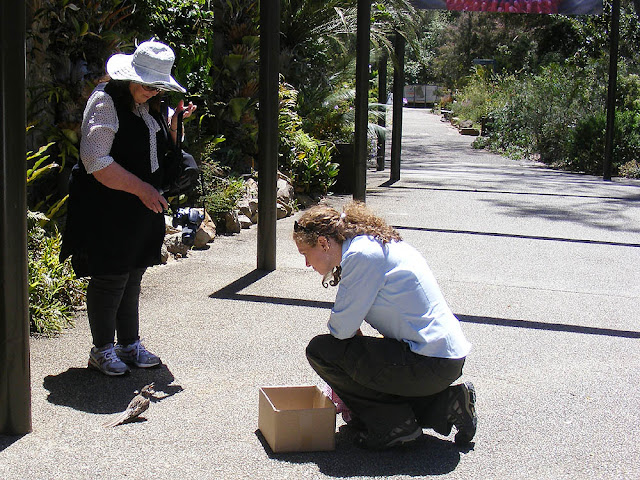 I rushed inside and told the receptionist, who found a box in the back office and came out, ready to rescue the bird. By the time we got back outside though, it was sitting up, panting, but not fitting. Suzanne stood so her shadow was over the bird, as it was a very hot day. We watched it for a minute or two, and just as I suggested getting some water for it, it heaved itself up of the ground and flapped into a nearby bush. It looked a bit confused and the landing wasn't very dignified, but it seemed like it was going to be alright so we left it to its own devices.

We presume it had managed to fly smack into one of the covered walkway posts and concussed itself.

Red Wattlebirds are extremely common in Canberra, and highly visible, as their raucous calls draw your attention. They are a type of large honeyeater, a family of birds unique to Australia and the surrounding islands, which use their brush tipped tongues to gather nectar from equally unique native plants such as Banksias and Bottlebrushes. Wattlebirds are bold and opportunisitic, so happily share space with man in parks and gardens and are quick to investigate picnic tables and barbecue areas for possible food sources -- they will take meat, bread, cheese and fruit given half a chance.
Posted by Susan at 09:00

We had a male Cardinal concuss
itself flying into a window
because it thought it was attacking
a rival. Sadly a local feral cat
grabbed him while he was "out."
Damn!

Sheila: It's sad to lose a lovely bird like that.