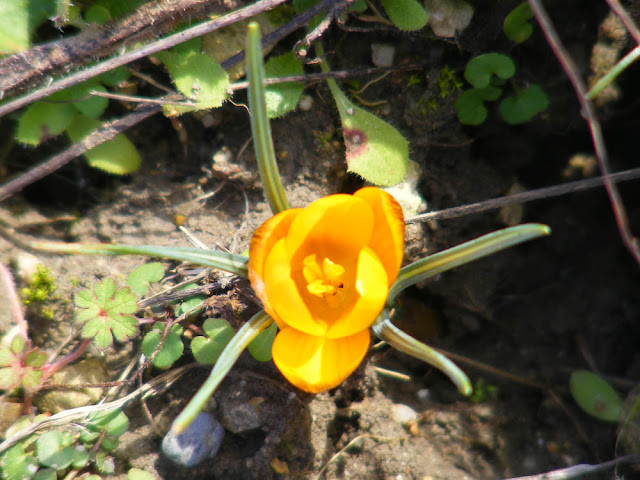 The crocuses have been out for nearly a week in the 'spare bulbs' bed in the potager. I calculate this is about 6 weeks early. The daffs in the lawn up at the house on the other hand are up, but have no signs of buds yet -- much more normal, although they are in a warmer (but shadier) spot than the crocuses. We've had very few frosts this winter so far, and daytime temperatures have often got into double figures. The big downside this winter has been the endless drizzling rain. Everything is utterly saturated, and has been since November. There is standing water in many fields and the rivers are all running over their banks. We aren't having flooding as such, but it's like living in a giganitic sponge full of water that never dries out. Yesterday when I went to Loches I noticed that the extensive water meadows in the town are all water and no meadow. Goodness only knows when I'll be able to have a bonfire to burn the orchard waste, or when I'll be able to dig the soil in the potager and plant vegetables. 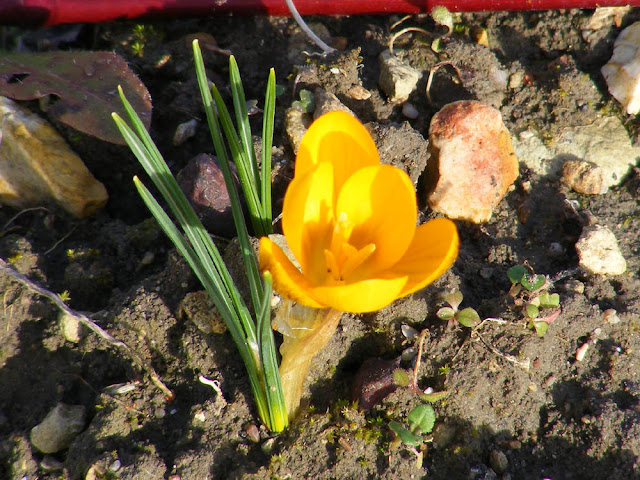 -----------------------------------------
The reason for my trip to Loches yesterday was an appointment for a mammogram at the radiologists near the station. When I got there the nurse took my details and asked me to take a seat, but warned me they were running a bit late. The mammography x-ray machine was playing up. I noticed that they had a sign saying they didn't take bank card and I told her I only had bank card. She said not to worry, I had my cancer screening letter with me, so there was no charge. After waiting for a while I got called in, and sure enough, the machine played up. I had to have both breasts squished multiple times. Sometimes it worked, sometimes it didn't. Then she went off to process the images and check them. She returned to say they had observed a tiny lump in my left breast, but couldn't be sure it was really there. To be sure she needed to do an x-ray with the breast even more firmly squashed. Then the radiologist would examine me with ultrasound to get a clearer picture if it still showed up on the x-ray. Since it was still there the second time round, the radiologist duly looked at it, and said I must come back in 4 months so he can check if anything has changed. He said it doesn't look like a tumor though. When I passed by the reception to pick up my x-rays and report the receptionist said 'That will be €20.79 please'. 'But you said there would be no charge!' 'Ah, but the doctor has done a supplementary examination.' I said I would have to go over to the cash machine and get cash. That would be fine, said the receptionist. When I returned with the cash, she handed over the medical documents (patients are responsible for keeping their own medical reports and x-rays in France), a form for claiming reimbursement of the fee (in the absence of my carte vitale), and a card telling me when my next appointment was. She made sure I knew to bring the x-rays and report back with me when I come in June -- people often forget, she said. Annoyingly, the medical records are in an envelope that is slightly to big to fit in a standard file box for storage at home. I had decided that for a mammogram it would be safe to drive myself to Loches, and am relieved to tell you that I did not to have a funny turn on the way home.

There is a Marché aux truffes (Truffle Market)  at Marigny-Marmande on Saturday 9, from 9 am to 1 pm. Ungraded truffles are affordable, with a walnut sized tuber costing about €20, an egg sized one about €30. There will be a general artisanal food market there, but beware if you don't like the smell of truffles, as it pervades everything.
Posted by Susan at 09:00

Susan, you'll've no trouble burning anything... come and borrow the X500 flame-thrower!!

When I had to have my hip x-ray I went armed with bank card, carte vitale etc not cash as I had no idea what it would cost.
My appointment was just before lunch and so we ended up dashing to the CA cashpoint getting out the money and dashing back to find they'd shut up shop! Luckily they were still in the car park at the side about to lock up and trot off to lunch.
We ended up paying them in the parking lot!

Gosh, we have it so easy here in OZ.

We too have crocus in flower and I, like you, worked out they must be about 6 weeks ahead of their usual flowering time.

Poor you with the mammogram! But glad to hear you didn't suffer another 'funny turn'! Hope all's well.

Reason I always take a couple of low dose of Aspirin or Tylenol before heading to my mammogram. Never know how/when the machine will act up.

Tim: thanks -- I will borrow it sometime this month.

Beaver: For combatting the discomfort?

Do you think crocuses like water...I'd never thought of them as preferring to be waterlogged.

Glad there were no funny turns....

Fly: the only thing I can think is that they are responding to the cold snap we had a couple of weeks ago, then it went mild again. I don't think they like being wet.

egad, horrid. do they do thermography there?

Pearl: I've not heard that they do. I had to look it up -- it doesn't have a very good reputation as a breast cancer screening method according to Wikipedia, and frankly, anything which that scaremongering quack Mercola recommends I'd be running a mile from.

Mammograms are uncomfortable but your idea of a low dose painkiler first sounds good. All I need to do now is to remember..

Correct. I have had a few painful discomfort moments from some technicians who seem to be always in a rush or in a bad mood because the machine is not working according to their expectation