Where has all the weather gone?

In the past 7 weeks we have had exactly one day where it rained, and that was about 10 minutes on the 23rd of April - 9 days ago.

It shouldn't be like that, and even more annoyingly, according to Meteo France it hasn't beem like that. For every single day of the last 7 weeks, at some stage they have forecast rain. At first it was continually forecast for about two days time, but recently they have been forecasting it for the same day (and sometimes even that part of the day we are in). 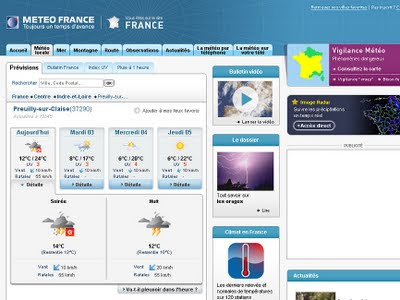 The view out of our window at the same time 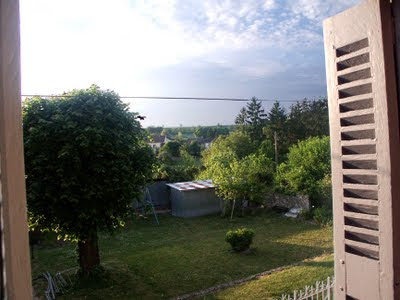 You will notice the lightning, rain and hail in the photo, exactly like the official website says. What annoys us is that everyone else seems to be getting weather. 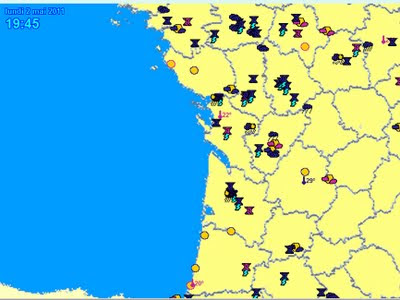 Normally I wouldn't be complaining, but it is only just May, and already we have run out of water at the potager because we have been watering by hand every second day.

I have some tomatoes to plant out, but should I? The longer this goes on, the more likely we are to get serious rain and hail.

I wrote the above last night at about 21.00hrs, just in case we did have some weather: the first thing that happens when we get lightning here is the telephone exchange cuts off the internet. Since I wrote this post it has started raining - good, steady rain. I hope it's enough to fill up our water tanks at the potager.
Posted by Simon at 09:00

Good to know that weather forecasters don't know their arse from their elbow is a world wide issue - not just a UK one! Seriously, hope you get more rain. Warm and dry is nice but we need a balance.

Glad you have some rain we are still waiting for some!!!! Diane

I'm glad some rain has arrived.
Before we left LP-P I did use up some precious tap water on our flower beds, because I didn't know when they would next get a 'drink'.
Normally I wouldn't do this.

The forecasts have been for scattered showers. You seem to be in a very dry place there at Preuilly. We've gotten more rain than you have, but not nearly enough.

I am sorry to say that we have been getting all of your rain. We are currently storing it in our basement and would be happy to send it your way.

Simon, we went to renew our insurance today at La R-P... the woman in MMA told us they had 50cm of hail in Poitiers... keep the toms under cover!!
How's the Mesange?

Ken. The ol' folks around here tell us it never rains in Preuilly sur Claise.

Paulita. So that's where it has gone. Can you send it over?

Tim. Everywhere had rain/hail. Tours has serious amounts yesterday. We had a couple of mm at most