... that would be mon oeuf. What we are talking about here is manœuvre. When you don't know what word you are listening out for, these things sometimes get confusing.

This morning the pompiers were on manoeuvre, having a training exercise in our neighbour's barn. First a pompiers' car arrived, then there was a sound like a shotgun being fired - this, I assume was a smoke bomb being let off. A couple of mintes later a van arrived followed by a firetruck. There was a bit of milling around for 45 minutes or so, then they all packed up and went away.

Next time we see these blokes, they will
be selling Chinese lanterns for Bastille day 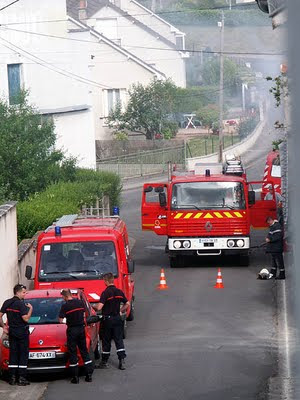 About an hour later, the pompiers' car was back, this time in the painter's workshop we can see from our upstairs window. This time I think they were dealing with "hazardous fumes", because they were all in breathing equipment.

Doing hazmat stuff. I think the man in the mask
has just rescued a colleague overcome by fumes 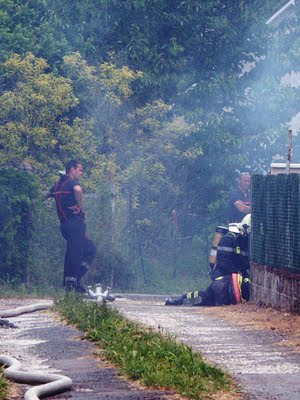 We could possibly have got closer for our photos, but one doesn't like to get in the way. I like the idea that they get a good practice in - just in case...