What is the French for Dolmades?

Even though vines abound here, there doesn't seem to be a local version of the Greek dish of stuffed vine leaves. They are easy to make and delicious, so the last couple of years we have pickled grape leaves in brine or made dolmades in early May, when the leaves are at the right stage to pick – big enough to contain a teaspoon or two of filling, but not too old and tough that you end up with a mouthful of fibres. 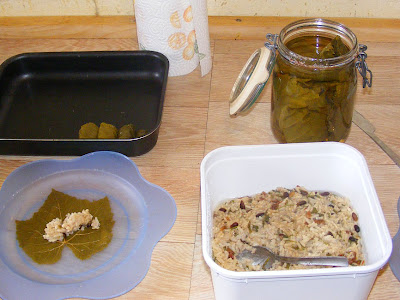 I found this page very helpful on how to choose and prepare the grape leaves, and I used Ken's recipe for the stuffing and cooking (except that I substituted diced dried tomatoes for the currants).

It will probably be another week until the leaves on our vines are ready to pick, but as soon as they have reached a decent size I will be pickling a big batch of leaves for later in the year.

Feuilles de vigne farcies, that's the French. But the idea is specifically Greek, I think. We are keeping an eye on the leaves on our few grape vines so that we can do the same thing when they're ready.

Thanks Ken. Dolmades are a big hit at apéros, so I like to have a good supply.