The aerial photos of Preuilly on Google Earth/Maps have just been updated. The new photos give a date of 19th August 2010 which may actually be correct, as that date was a Thursday and the photo shows the Thursday market. 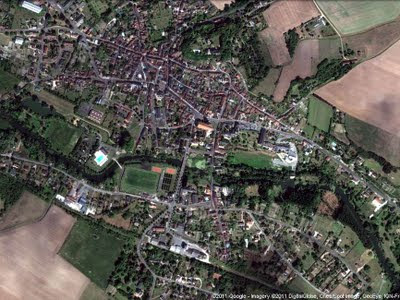 If you know where to look, you can tell it was 2010, as well - you can see our garden improvements and the Velux that isn't, as well as the plots on the potager. It appears that being a Thursday Susan is just leaving to go to the supermarket, as the car is half in the courtyard and half on the road.

The Market - the fishmonger's trailer is the smaller white
roof on the right, the vegetable man's trailer is on the left 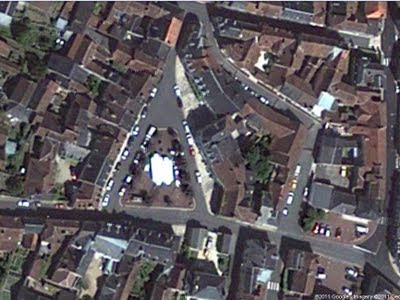 The only quibble I have is that it seems awfully green to be August. Last year was a dry year, so much so that we harvested very little in the way of vegetables.

Talking of dry years: we had a thunderstorm last night. Lots of thunder, some lightning, and not enough rain to make the dust wet. In fact I was standing outside the whole time it was "raining" and didn't actually get damp - which is disappointing, as Meteo France had issued a weather warning for us, and had predicted it was going to rain all afternoon evening and night.

I am sure their inaccurcy isn't wilful, but some days it sure does feel like it.

We also had rain, the same amount as you but last night we could see the lightning in the far distance but no thunder or rain and a clear starlit sky. strange!!

The skies here were as black as the inside of a black thing in a cave at 10.00pm, with nonstop lightning, and then stars from horizon to horizon by midnight.

I'm just loading it up as I type for a closer look!

Simon - same here in Melbourne. We replaced our car and Google Earth had my old car from 3 years ago sitting in the driveway but now both our current cars are there.
I find Google Earth fascinating and very helpful when doing the Wednesdays in France posts.
leon

As we were sitting outside having coffee yesterday in our little village, a van with mapping equipment drove up and down the street. My husband said we should smile because we would be on google maps, the street version, obviously, not the satellite version.

There are new aerial photos of our house and neighborhood on Google Earth and Maps too, but as best we can see they must date from 2009. There's a house under construction down near the end of our road. Work has been going on for at least two years. Yet that house doesn't appear on the current Google view at all.

Ken. Until Friday, the aerial photos of Preuilly dated from before September 2007: I am guessing about May 2007