Integrating with the Field Nats 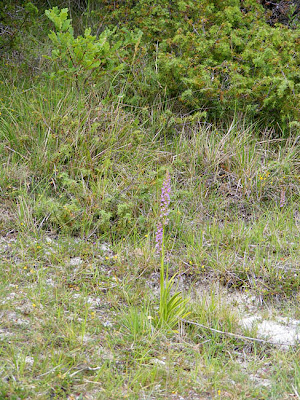 On Saturday I indulged in a bit more integrating (as it is apparently known) going on my first outing with the Association de Botanique et de Mycologie de Sainte-Maure-de-Touraine. The Sainte Maure de Touraine Botany and Mycology Club may have started off as its title indicates, but these days it is really the Touraine Field Naturalists Club. The focus on Saturday was orchids in the Chaumussay area, so it was a great one for me to start with. I was the only non-French person attending, although that may have been influenced by the fact that Marc Fleury, the club's orchid expert, was also leading a walk from Ligueil on Sunday which had received quite wide publicity due to the switched-on Ligueil Tourist Office.

The nearly invisible Small-leaved Helleborine
growing in the leaf litter. 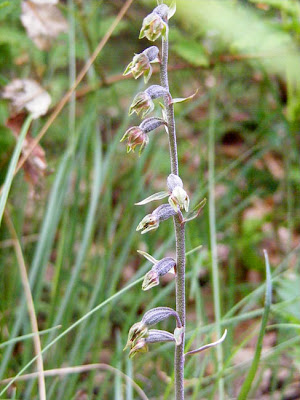 I enjoyed the afternoon immensely, getting two new orchid species and several new plants from other families on my personal checklist, as well as some good photos of a butterfly and a dragonfly I have been chasing for a couple of weeks. However, it was quite hard work on the language front, and just keeping up with the discussion amongst some nicely nerdy naturalists was fairly taxing. As I didn't know anyone else present, Marc took me under his wing, in the way that personable Frenchmen of a certain age do. Somewhat embarrassingly he introduced me as 'his colleague from Australia who is interested in the dipteran pollinators of orchids'. Perfectly true, except that as yet I know very little about what flies pollinate which orchids, but Marc several times asked me to confirm information or if I had anything to add to what he was saying. Yikes! 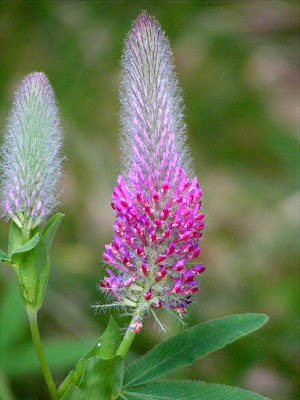 I was also put on my mettle by Jean, who showed me a series of fantastically good photos taken with a microscope and stored on his camera. He was curious to know if I knew what the creatures were. He, of course, knew exactly what species they were. Since the photos were of mites, ticks, fleas, pseudoscorpions and strange flat wingless flies that parasitise bats - all tiny, ugly and brown - I think I did OK by being able to identify them at least to family level. Theoretically, we had a language in common - scientific Latin - but I found it quite tricky to remember to pronounce scientific names with a French accent. A simple example is 'pseudoscorpion'. In French, you pronounce the 'p' in words like 'psychiatrist', 'pneumatic' and 'pseudoscorpion'.

Violet Limodore, fully open for once, because it is hot. 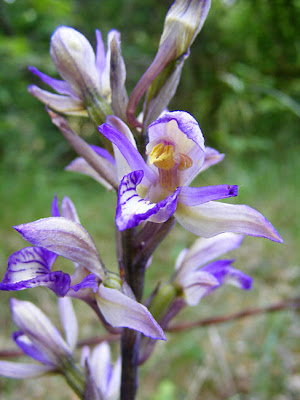 We visited three sites over the course of the afternoon. All three were excellent examples of the flora rich limestone spurs that run along the Claise Valley around Preuilly. The first I was already very familiar with, as it is one of my butterfly survey transects. Marc was a bit disappointed that he wasn't able to show me an orchid I hadn't already seen there. The second site was near La Forge, where we scrambled up the dry chalky slope to see Short-spurred Fragrant Orchid Gymnadenia odoratissima (Gymnadène odorante) in considerable numbers amongst the very prickly Juniper Juniperus communis (Genièvre) bushes (I am now covered in little scratches). Then it was off to a site the other side of Chaumussay, on a road that I have used as a shortcut many times without realising what treasure the woodland it cuts through holds. Here we found two rare orchids - Violet Limodore Limodorum abortivum (Limodore à feuilles avortées) in good numbers and the impossibly discreet Small-leaved Helleborine Epipactis microphylla (Epipactis à petites feuilles), as well as Moïse Aristobile's Black Pea Lathyrus niger (Gesse noire) and its pretty cousin, the garden worthy Long-leaved Crimson Clover Trifolium rubens (Trèfle rouge). All special plants associated with this special warm limestone habitat. In total we saw 16 species of orchids and a couple of hybrids for the afternoon.

The day ended with us all standing in the middle of
the road drinking Marc's homemade cider.
Note that the experienced French botanist carries a trowel. 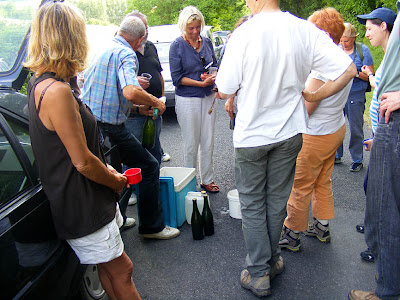 The next outing near Preuilly is in June, to look at plants of damp places in the Forêt de Preuilly, and I will definitely be going.

Please tell me the trowels aren't for digging up orchids!

Susan, you'll be fluent in French in no time flat. Keep up the good work. You have incentives all around you, as well as wild life, fauna and flora. You are lucky!

Never fear Sheila - the trowel was only used to open the cider bottles.

CHM: Thanks for your kind encouragement, but at the moment I speak a kind of pidgeon French. I suppose it will get better, but no time flat doesn't seem likely.

Hi
I have just spent an enjoyable week in Azay le Ferron and ate a couple of times in Preuilly at L`Image,very good.Visited lots of reserves got some good birds and butterflies if you look at Kearsney birder you can see them
bon chance
Phil Smith Dover.

Looks like it was well worth going along, and joining in Susan. Next time it will be easier - I'm sure you more than held your own.

Phil: Hi. Azay is a great base for a birder. Your purple heron photos are lovely.

Gaynor: The Claise valley is particularly good for orchids and this is peak flowering period.

Sounds like you had a great time. Loved the photo of the Violet Limodore. What an amazing coulour. All in French--you really 'earned' your cider :-)