Walking Around the Etang du Louroux

The Etang du Louroux is the largest hand dug dam or lake in Europe, fed by the Echandon River, which is little more than a trickling stream. The dam was build by Benedictine lay brothers associated with the Priory on the other side of the village. Remarkably, it is still used in the traditional way to raise fish for the table. On the outskirts of the village of Le Louroux the dam wall holds the water back until fish harvesting time in November. Then the sluice is opened and the water pours out in a controlled way down a channel barricaded with grills to catch any escaping fish and debris. Nowadays it is also run as a nature reserve and our Monday 6 July walk was to circumnavigate it. I can highly recommend it as a surprisingly varied walk, all on the flat. Here are a few photos to show you what we saw. 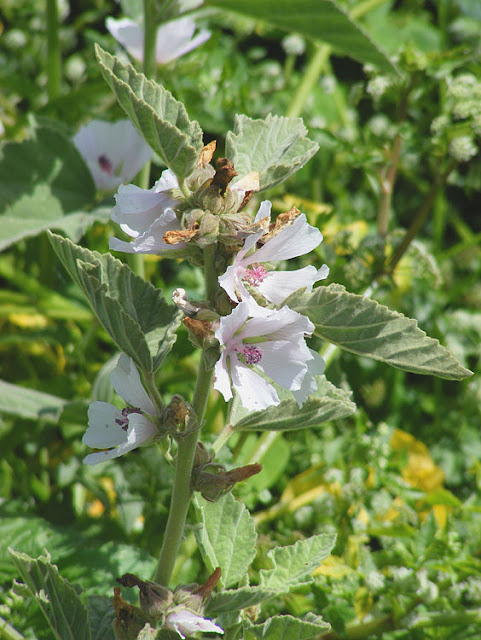 From ancient times the roots of this plant was used to make a confection that was both medicinal and a treat, and in some very poor areas, it was cooked as a staple vegetable. We know the confection today as marshmallow, but modern marshmallow confections don't contain any of the wild plant. The plant is still used in Eastern Europe as a herbal remedy for respiratory conditions. At some point French cooks combined the root with meringue and a recogniseable ancestor of the modern marshmallow was created, called guimauve in French and traditionally flavoured with rosewater.

Looking towards the dam wall and the village. 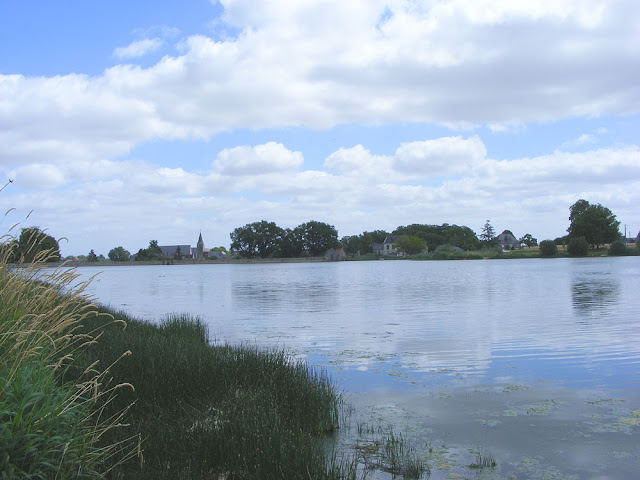 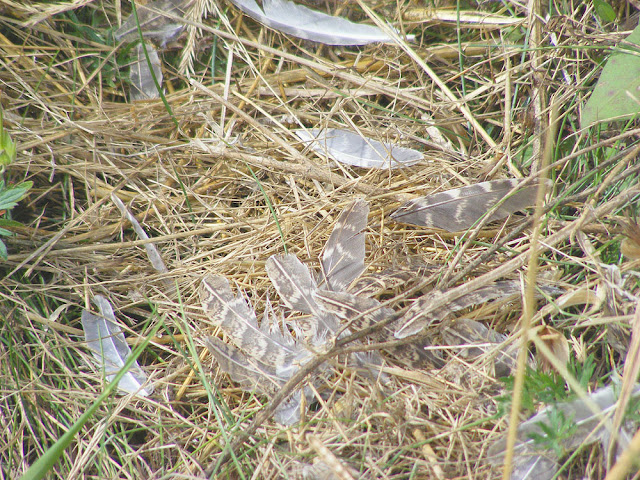 My friend Henri called me over to look at these feathers. He told me that the fact they had been cut, not plucked, meant that the predator that got this pheasant must have been a fox. Henri is a retired pheasant farmer, so he knows about such things. 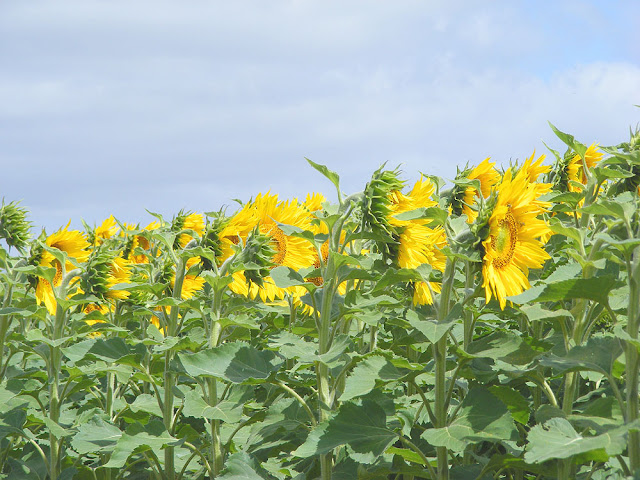 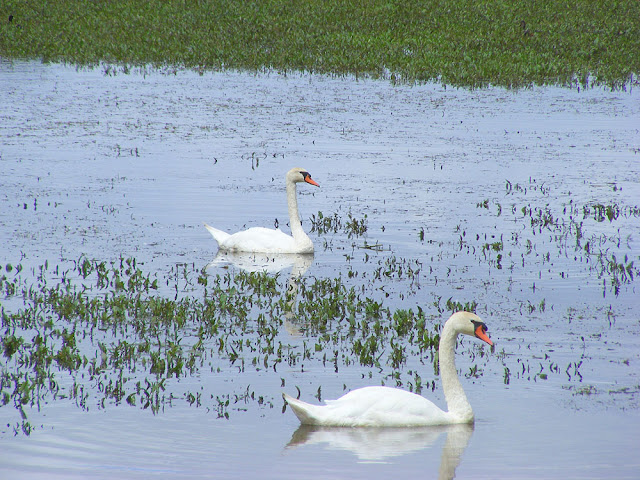 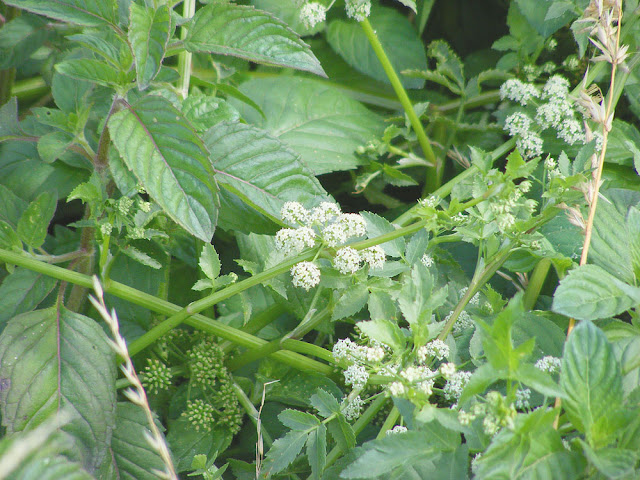 These two vigorous plants were entirely filling up a roadside ditch. The mint stinks in a characteristic pepperminty way if you crush the leaves (whoever thought it was a good flavour to add to confectionary clearly had different tastebuds to me!). The Lesser Water Parsnip is poisonous, so make sure you can identify it if you are foraging in damp places. 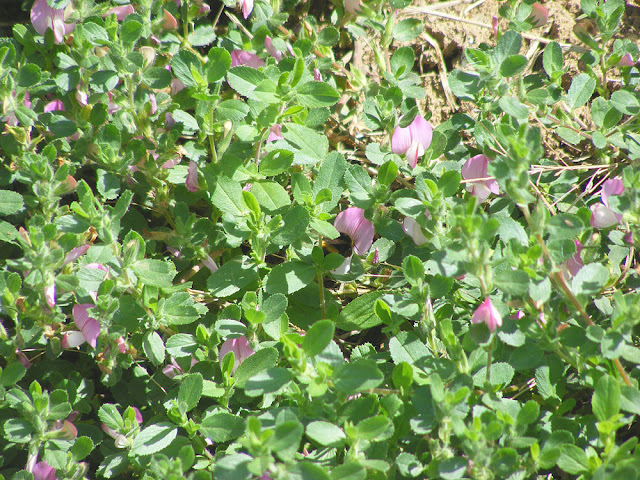 Henri asked me if I knew the name of this plant in French. When I admitted I did not he was delighted to tell me. It took me a few minutes to realise that the names in both English and French are referencing the same thing. That is, that in the old days, the robust and extensive root system of this plant could bring a plough to a halt. 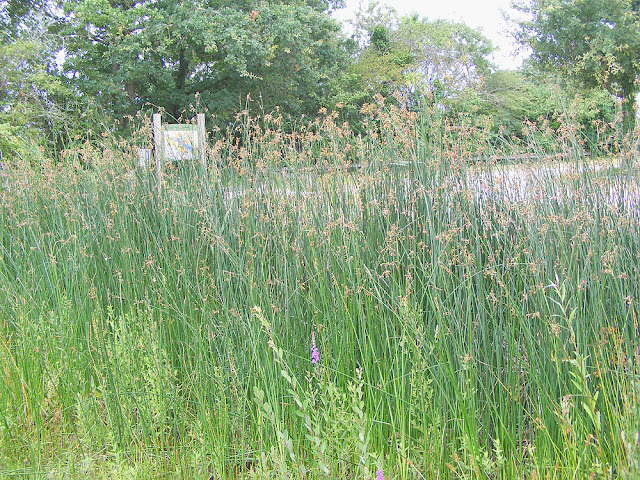 This plant is the true bulrush, used to make rush matting, baskets and upholstery, but it is rarely called that these days, due to confusion with plants which should more properly be called cattails Typha spp. Once upon a time every village would have had an artisan who made rush matting, an affordable and disposable floor and wall covering with a wonderful fresh hay scent, ideal for bedrooms. Nowadays only a tiny handful of people know how to process the rush and make household items out of rush. To see some beautiful rush wall coverings, I recommend you visit the Chateau of Azay le Rideau, where curators reconstructed Philippe Lesbahy's bedroom and had rush wall coverings made to a pattern discovered behind a skirting board in Hampton Court Palace. 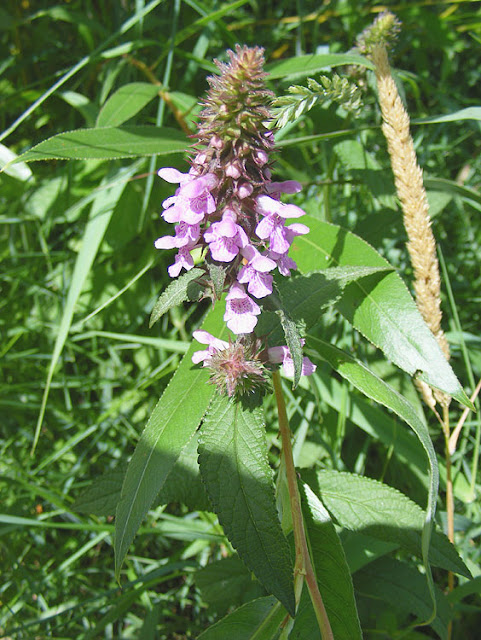 Series of grills designed to catch fish and debris when the dam is emptied.