Back in May, for our first post lockdown outing, we went for a little drive to check out some of the little known chateaux close to where we live. But there was another site we wanted to visit, and it turned out to be a highlight, even though there is fairly literally nothing there.

Hidden by the lay of the land and forest on three sides there is a largish sandy field. It appears to be in the middle of nowhere, and to some extent it is. But it would only have been a twenty minute bicycle ride from the nearest village. And seventy-seven years ago, someone would indeed have have cycled there. Others would have emerged silently from the forest like wraiths. And in the middle of the night, a plane flew over and dropped vital equipment for the Resistance.
Because what you see now is just an open field in the middle of nowhere, this site is very evocative. You can visualise what took place here in half light of a mid-summer night, or again in the depths of a winter night. The seriousness and the bravery of those involved can be imagined but now it's a fading memory, even locally. Just a simple memorial on the side of the road. 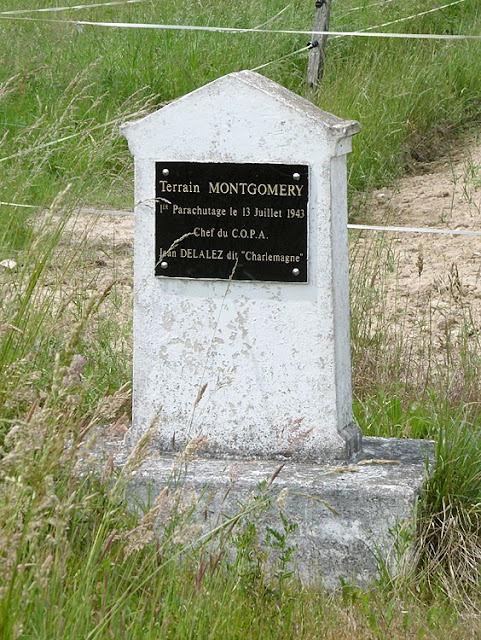 The field was part of a network of drop zones set up and approved by London and managed by local Resistance groups. The first drop here took place on 13 July 1943, overseen by the group commanded by Jean Delalez, code named 'Charlemagne'. The drop site itself had been given the code name 'Montgomery'. The Resistance group and London communicated by coded radio messages, using phrases such as 'the horses came at a gallop' or 'Agatha is doing the laundry'. All radio operators were parachuted in, with their radio, and only they knew how to use the device. Codes were changed every day.
At 17:30 the radio operator would get a message that two identical messages would be sent at 20:00 and 21:00 to identify the drop zone. Drops were made between 22:00 and 01:00. The radio operator would signal to the pilot by spotlight, and three maquisards would lay out two white lights and a red light in a triangle to indicate the direction of the wind. By mid-June the next year the parachute teams had this all down pat and drops became more frequent. Most of the drops were of arms, munitions and materiels, but occasionally men.
************************************************

Interesting. I remember watching a TV programme many many years ago based on the drops, as I remember it was in Black and White so before colour TV. Anybody remember what it was called? I think it had moon in the title but not sure. will ask google!!C

Not exactly the same but its the memory you brought back for me!!

It's important to remember these things. We think that times are difficult for us at the moment but the hardships endured and the bravery of people back then was way more intense.

Never heard of the programme. On FB someone alerted me to the story of Pearl Witherington -- if you are interested look her up -- amazing woman.

Yes, with no idea of when the war would end and many more people having family far away and in danger.