Now, before I relate this story I need to make everyone aware that the people in the photos have absolutely no connection with the strawberry fraud case I'm going to write about. The pictures show 'my' strawberry producer at Loches market. Her farm is in the Sologne and I have been buying strawberries, other soft fruit, asparagus, green beans and tomatoes, and wild mushrooms from her for years now. Her products are good quality, well priced and I am sure always correctly labelled.

Strawberries are not just strawberries in France. Everyone knows the different varieties and have their favourites and know their seasons. So passing off one variety of strawberry as another is taken very seriously here. Recently, a wholesaler accused by a strawberry producer of having sold Cigalines under the name of Gariguettes was convicted of fraud.


Gariguette strawberries from a local producer who sells at the market. 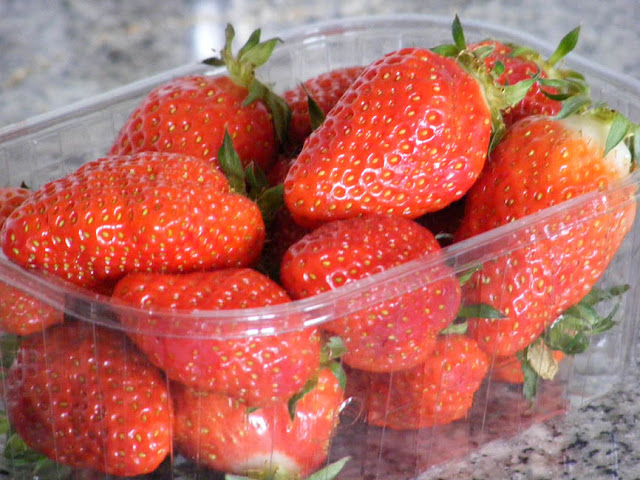 The two varieties of strawberries are a type known as 'long strawberries' and very visually similar. But not everyone has heard of Cigalines, whereas Gariguettes are the most popular variety in France, so normally sold at a premium. The wholesaler stated in his defence that he considered Cigaline an excellent variety, and the same standard as Gariguette. He also stated that wholesale prices for both varieties fluctuated up and down, and Gariguettes were not necessarily more expensive than Cigalines.

The prosecution argued that the producer lost money because he concentrated on producing Cigalines and did not have a supply of Gariguettes available for other buyers. The Fraud Control team said there was no question that passing the Cigalines off as Gariguettes was fraud. The judge said that in her view the real question was consumer information, and if she bought a punnet of Gariguettes at the supermarket, she must be sure that they were not Cigalines.

The wholesaler did not put in an appearance at the court, and it was revealed that he had a previous conviction for fraud involving leeks (!??)

Buying strawberries from the Sologne in Loches market last Wednesday
(that's me in black on the right). 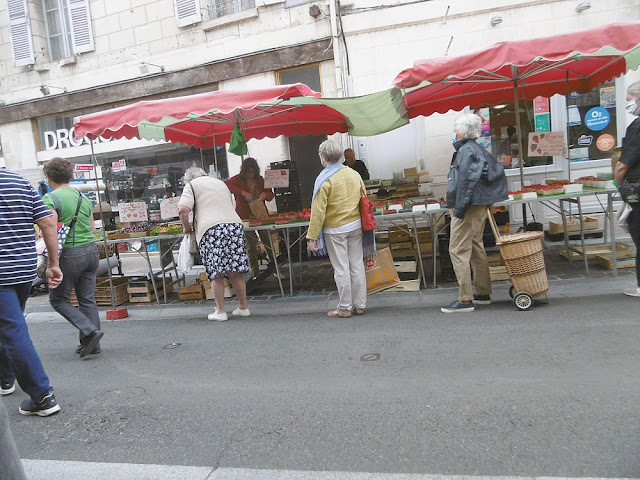 After deliberating, the tribunal ruled that it was consumer deception and that the producer was not substantially disadvantaged. The wholesaler was found guilty and fined 5000 euros.

If you want to check the authenticity of your strawberries, then check their hairs. Apparently Gariguette hairs go one way, and Cigaline hairs go the other (but don't ask me which way for which, as I have been unable to find out). Gariguettes were bred in the 1970s and are now a firm favourite early season in the French farmers markets (only displaced later in the season by Mara des bois). Cigalines were developed in the Sologne, so you could say are our local strawberry variety, adapted to local conditions, but they didn't come on to the market until 1998, and have not had so much time to become a household name in France. My reading suggests that the wholesaler had a point -- they seem to be a highly regarded variety by those who really know about strawberries.

Can we have the leek fraud story, please...... that sounds very strange, too!!
Fun post... nice to know that fraud like this is prosecuted.
Remember the tomato fraud from a couple of years back?

I can only imagine what the leek fraud involved. I was unable to find out. It could have been something like passing off leeks from eastern Europe as French. I don't remember a specific tomato fraud -- was it the one where supermarkets were passing off lookalike but tasteless tomatoes as beefhearts?

BUT do they taste any different? To me a strawberry is a strawberry, some last longer than others but all taste strawberry. In saying that there was a TV programme on food in Japan and there a single strawberry was something like £350. What the heck, wonky strawberries from ALDI at less than £1 are fine by me... C

Yes... that's the one!
And it wasn't just beefhearts, it was a whole load of heritage look-alikes... the Intermarché in Descartes did a wonderful promo on some real ones from a "producteur" in the Loire Valley.
The tasteless ones are still around... but named differently.... just noir, vert et jaune added.... plus a descriptor that covers them all including the red "beefheart" as well... but, for the moment, that has escaped the grey cells and gone awandering!

The huge Spanish strawberries you can get in the UK most of the year round seem almost completely tasteless to me. The tastiest ones are the smaller British varieties which are not expensive. And of course the gariguettes in France.

We frequently buy strawberries from this stall, they are very good.
For a few years there has been a stall at the next corner down manned by a bloke who ripped us off big style, selling punnets of bruised and tired fruit topped with a few fresh ones. He only got us the once. He was still there last year, fleecing the tourists.

I know the stall you mean. I've never bought anything from him. I do like the Sologne strawberry stall in terms of the quality of their product -- but she really needs to improve her hygiene practices for Covid19! She never wears a mask, and last time I was there, coughed into her hand three times then immediately handled some strawberries! I nearly handed her my hand sanitizer, because there doesn't appear to be any on the stall.

big ones from spain are tasteless and don’t last at all. i only buy from producers here in provence.
bonnie near carpentrs. which id famous for its strawberries

Us too, we only buy locally grown seasonal strawberries.