The Priory at le Louroux

The Priory of Le Louroux was one of nine priories founded in the 11th century by the Benedictine Abbey of Marmoutier.

Prior's Lodgings on the left, Tithe Barn on the right.

The buildings you see now range from the 12th century to the 20th century, and are completely surrounded by a defensive wall, with access by either a drawbridge or a fixed bridge. Architecturally it includes examples of Romanesque, Gothic, Renaissance and Classical that functioned as the Prior's Lodgings, two barns, a dovecote and a church. In the Middle Ages there was also a Great Hall, but no vestige of it remains.

Around the middle of the 16th century the Priory was transformed into an agricultural establishment, then passed to the Archbishopric of Tours in the middle of the 18th century. Rented to farmers, the former priory and its estate were then sold as national property in 1791.

Prior's Lodgings on the left, gable end of the Tithe Barn, with its hefty buttress, on the right.

The whole complex was completely restored in the early 21st century. We wrote about it at the time (One for the Roofing Fetishists). 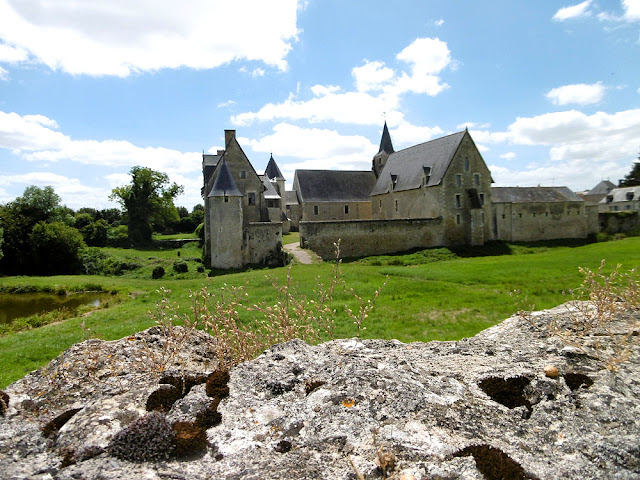 The Dovecote: Positioned near the Priory, it has been renovated in keeping with traditions specific to the region. In the local Touraine dialect, it is termed 'une fuye', not 'un pigeonnier', but the two terms are synonymous. It is a circular building of about 8 meters in diameter with 1 meter thick walls made of rendered rubble stone. The interior is original, with a revolving shaft as well as the ladder to access the nest holes. The lower five rows of niches are of ashlar cut stone, and the upper three rows have circular ceramic entrances, which is quite rare. As is traditional with medieval dovecotes, the number of niches corresponded to the number of acres of land held by the estate, and so the size of the dovecote reflects the size of the estate. 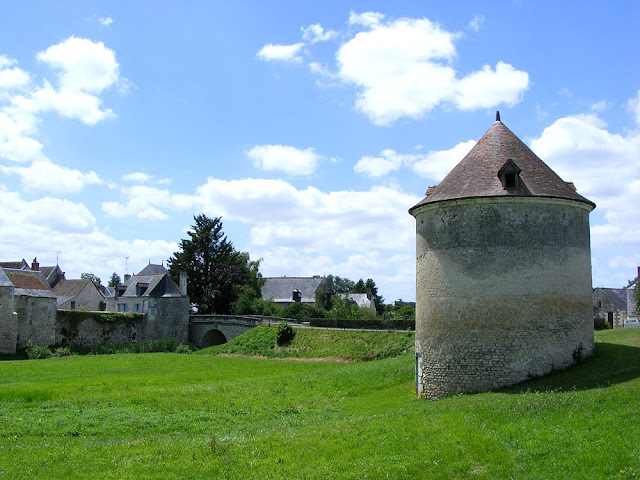 The 15th Century Tithe Barn: The tithe barn is an architecturally coherent structure which has been little altered, in the Gothic style. The building was constructed in a single phase by at least 100 masons and carpenters. Presumably to fit the site, it is not a perfect rectangle, with only the northern corners proper right angles.

The roof consists of two steep planes supported by a hull-shaped frame. This assembly of wooden pieces consists of 43 trusses and a ridge purlin measuring more than ten metres in length. In addition to the ground floor, the building has three floors topped by an attic. The attic extends the entire length of the building and has no partitions. The third floor has a wooden floor made up of grooved slats held together by wooden dowels, fastened with forged nails. The third floor, which is contemporary to the roof structure, is set between triangulated trusses. There are very few openings facing inwards to the courtyard and no traces of chimneys. The building has presumably been used as a barn from the very beginning, but it seems likely that the third floor was probably the monks' dormitory.

The ground and first floors have mullioned windows, while four dormer windows - two on the west and two on the east - with triangular pediments and no mouldings, open onto the top of the façades.


The northern side of the complex.

The latest news for the Priory is that a new young chef has taken the concession for the restaurant in the complex, so we wish him all the best. Details here (in French).

Interesting. We also have been in the roof and have a good set of pictures. It is very impressive as I remember.C

Ah! Lucky you! I've never managed to get inside any of the buildings except the exhibition space and the church.

Interesting prieuré. I like your new banner; very summery!

Interesting and completely unknown outside the immediate area. I love the new banner -- best sunflower photo we took by far!