Once Joan of Arc had convinced young Charles VII that she was the real deal, and had the potential to save his kingdom, he set her up in a household of her own and either he, his mother in law Yolande of Aragon, Duchess of Anjou, or the people of Tours, equipped her appropriately as a fighting maiden, with troops, armour, horses and a pennant.


A suit of armour (or 'harness' as it was known in those times) appears in the royal accounts in April 1429, costing 100 ecus. It was plain, undecorated white steel. Not the most expensive armour, but twice as expensive as what an ordinary soldier would be decked out in, or you could have purchased 100 war stallions with the money. It weighed twenty-eight kilograms and was sufficiently articulated that Joan could fight effectively and mount her big black charger. The King himself sported armour that cost eight times the amount that Joan's did. The armour took eight weeks to build, so for two months she had to cool her heels between Chinon and Tours.


The later house in Tours on the site of the workshop where Joan of Arc's armour was made. 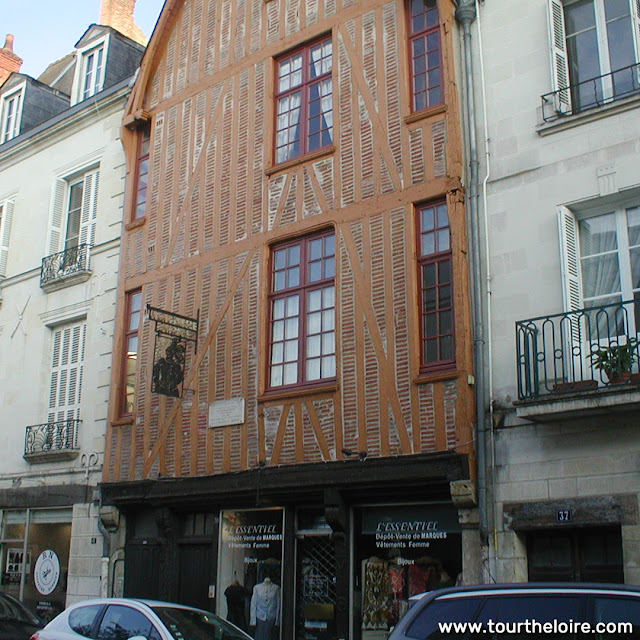 Even in her new armour she had a lucky escape at Orléans, when an arrow pierced the metal plate, causing her to leave the battlefield temporarily. Her wound was treated with olive oil and lard and bandaged. After a bit of time to recover from the shock she returned to the fray. After the failed attack on Paris this suit of armour was offered to the Abbey of Saint Denis, where French monarchs are traditionally buried. No one knows what became of it, so it is possible that it, or parts of it, still exist somewhere.

And check out what the shop is -- a second-hand designer clothing store. Great for us budget minded recycling fashionistas. This is rue Colbert, so in the old centre of Tours, where all the restaurants are.

Love Chinon it's a great place... BUT they do milk Joan somewhat but who can blame them!!C

I think there must be a 'gentlemen's agreement' between Loches and Chinon that Loches does not make such a big deal about her -- yet her association with the town is just as strong.