We saw the board in a couple of bars in Switzerland and wondered. Guesses included some sort of tab system, somewhere you keep a hotel's room keys, or a something else less defined.

But now we know. A Cagnotte is like a Christmas club, but it's not restricted to Christmas. A group is formed which agrees on a monthly donation, and at the end of the year a party is held using the money. The Cagnomatic is a device for making it easier to collect the money - members put the agreed amount through their slot, and the bar owner (or maybe the responsible club member) banks the money to be used for the party. 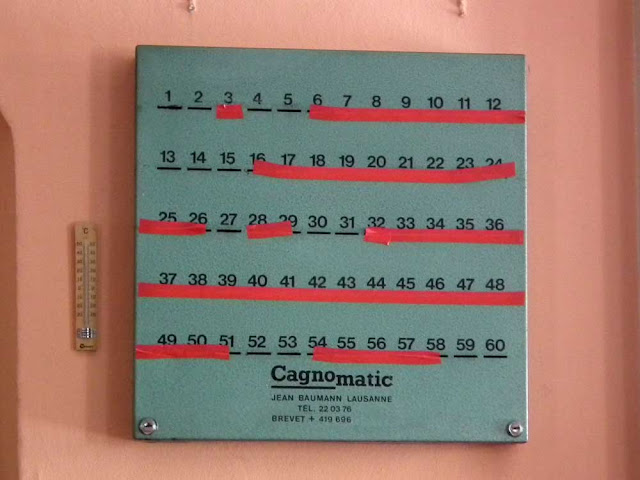 It appears that cagnottes started to happen at the start of the 20th century. These days there are many places where you can start one online, but they appear to be more along the line of crowdfunding. As far as I can tell, in France you can call a piggybank you're using for a particular purpose a cagnotte, as well.

This Cagnomatic was photographed in the Bar Centrale in Grono, a village near Bellinzona, close to the Italian border. The waitress spoke only Italian, but the veal they served was properly good. And yes - it's that pink!
Posted by Simon at 09:00