It is a tradition of ours to post a photo of a coucou (cowslip) every year as soon as possible after they flower.

Last week I commented to Susan that the coucou were late (6 weeks or so later than last year), and then almost immediately we saw our first. They are not as numerous as they have been in past years, either - many councils have mown the roadside verges already.

Here are some that have just about survived the carnage. 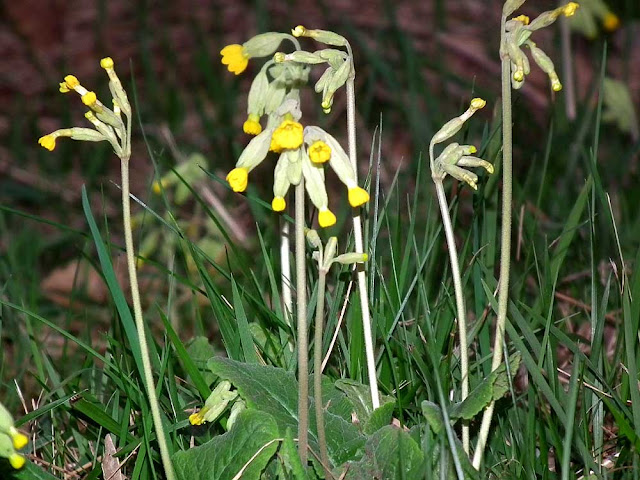 Brexit March: We will be in London for the march against Brexit on the weekend. We are planning to meet friends and family at Victoria station, then the group calling themselves RIFT (Remain in France Together) in front of Buckingham Palace, before moving on to the start of the march at the Hilton Hotel. I'm hoping to catch up with my friend and former colleague Emile there too (he has the 'reverse' issue to us, being an EU national living and working in Britain). If you are planning to be there too, get in touch and maybe we can co-ordinate something.
Susan

I heard the first cuckoo this morning.

We are looking forward to catching up at Victoria Station around 10am. We'll look out for Simon's banner...

Hope against hope that Brexit could be somehow reversed!

I'm not a great one for marches, but I am tempted by this one. On the other hand there are signs of a rift in the lute:
https://www.theguardian.com/politics/2017/mar/21/anti-brexit-campaigners-face-conundrum-as-date-is-set-for-article-50

Susan from Our French Oasis emailed me to say she has a technical issue as a Mac user and can't comment on Blogger. She wanted to say: "we never see Cowslips around here, have no idea why, but I saw lots on my way up north into the Vienne on Saturday and commented on them to Gigi, our youngest who was with me, they so remind me of my childhood, they used to grow in all the fields and hedgerows."

Yes, I read this. I think it's too late to stop Brexit now, the government seems determined to do it no matter what, but the voices of protest should still get out there and try to be heard. We've never been on a march before, so it will be interesting. We felt we needed to do something other than upset our friends on social media.