Angers has some magnificent architecture. One of the most unexpected buildings is a large art nouveau structure on one of the principal shopping streets.

It dates from 1902 and was built as the cafe-concert de l'Alcazar, a popular venue which had been going since 1892. The architect was Gaston Réchin and the chief sculptor Maurice Legendre. The building was in fact a reworking of an existing house that stood on the site and was commissioned by Pierre Thiébault the regimental bootmaker to the 135th infantry and run very successfully by the Widow Bourteau, who had run the Alcazar before its art nouveau makeover. 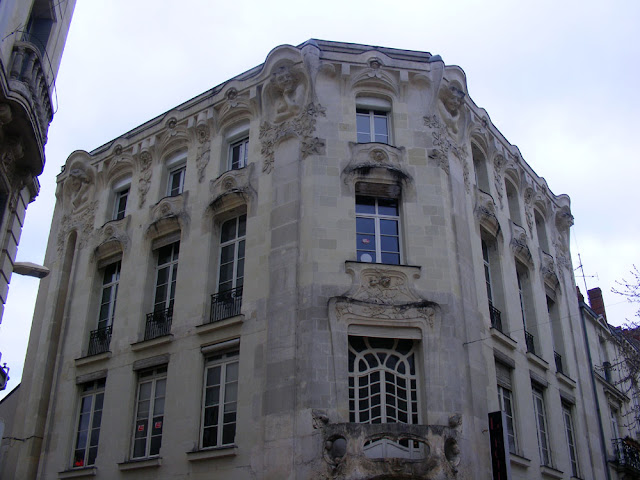 The fashion for concert cafés started in Paris in the 18th century, and venues like this offered caberet, cinema, dancing, concerts, balls, acrobatics, magicians and music hall. The Alcazar employed a house orchestra. Not many years after it opened in 1902 it changed hands and became the El Dorado. In 1933 the building was greatly altered, losing its metal bow windows either side of the corner on the first floor and guard rails were fixed to the second floor windows. Today the building is a private club called le Boléro.

Six female busts smile down from on high, to give you an idea of the ambiance inside. Augmenting the pretty women are floral motifs by the carver-designer Louis André, who created sunflowers, roses and chestnut leaves to twine around the openings. The new building had electric light, with ceilings lit like never before. The public was charmed. 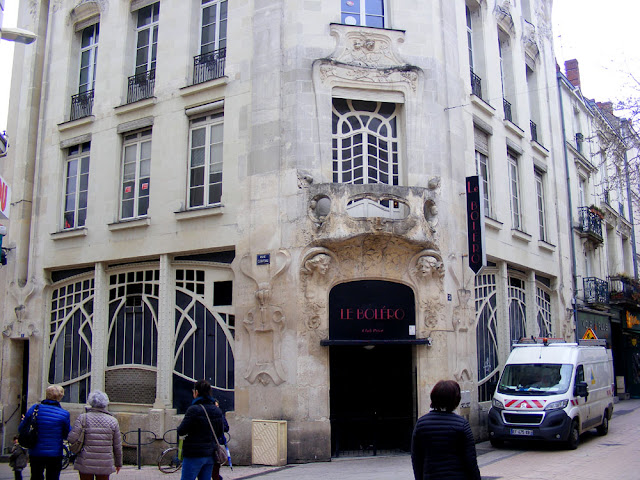 Performers came from all over, including the Folies-Bergères in Paris and the Alhambra in London. Locally born Nini Patte-en-l'Air came to dance the cancan with her colleagues from the Moulin-Rouge. On the other hand, young singer songwriters started their careers here before moving on to find fame in Paris. The public taste in operettas seemed to be for the more melodramatic and stunt filled the better (a show called 'The Circle of Death' ran for an extended season).

Berthe Bourteau retired in 1907 and Paul Loos took over, changing the name to El Dorado. But in 1913 scandal erupted when he killed his girlfriend, the dancer Capri.

During the First World War the café closed, but re-opened as a cinema afterwards. Later it became a dance hall, until the Second World War. Then it seems to have been abandoned until being revived as a private club in the 1960s. It changed hands again in 1984, but continues under the banner of le Boléro.

France has some amazing examples of Art Nouveau. We have patches of it in Melbourne along with Art Deco.

Yes, you can nearly always find some Art Nouveau in France. It's so long since I was in Melbourne I can't remember.