La Maison d'Adam is one of the unmissable sights in Angers. It is one of the outstanding architectural testiments to a medieval heritage which are scattered about the city today. The 'House of Adam' (also known as 'the House of Adam and Eve' or 'the House of the Tree of Life') was constructed towards the end of the 15th century. It was acquired in 1900 by the local artisans association and is sometimes referred to now as the Maison des Artisans. 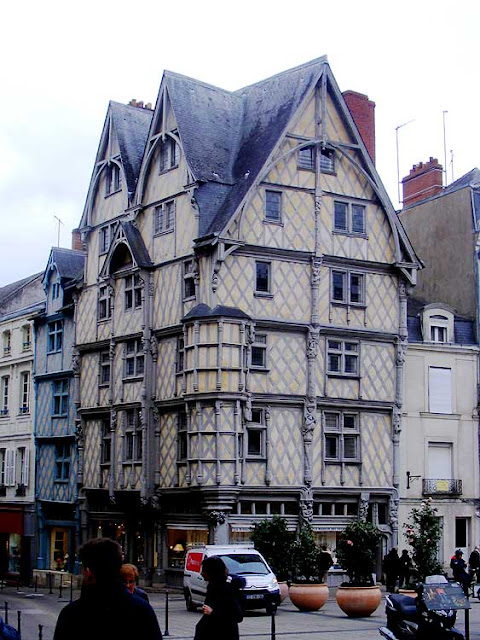 Situated in the Place Sainte Croix, by the apse of the cathedral and on the crossing of the two major commercial streets in the city, the 'House of Adam' is the most exceptional of around 40 extant timber framed buildings in Angers. Its dimensions are imposing, its structure complex and its decoration enigmatic. It is truly one of the most remarkable works of carpentry from the French Middle Ages.

It owes its name to the statues of Adam and Eve which once stood either side of the Tree of Life on the ground level corner of the building, and it seems to have been known as la Maison d'Adam since at least the 17th century. Recent dating evidence puts its construction at 1491, and the original builders and subsequent owners were apothecaries.

Today set back from the square, originally it sat right on a major crossroads, flanked by tall thin merchants houses. Its ideal location permitted the double fronted facade that was twice the normal length in both directions, and six storeys high instead of the normal four storeys.
. 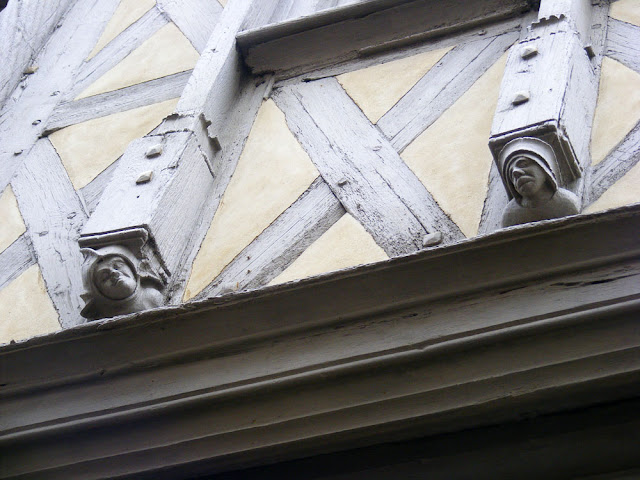 The multiple gables, the decorative lozenge shaped fills, the deeply moulded horizontal string courses and corbels supported by thick carved posts illustrate in magnificent fashion the skill of the carpenters at the height of their powers. The corner tower houses tiny offices known as écritoires or comptoirs. 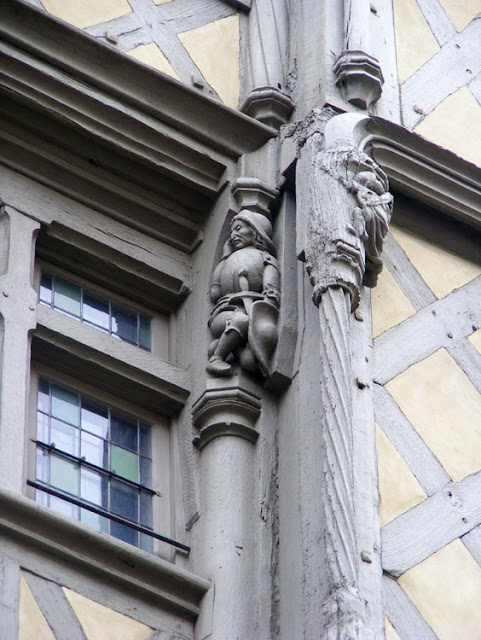 It is the richness of the sculpture that above all marks this building out. The decorative themes range from the naturalistic, like the knots in a tree, to the stylised twisted flutes on the posts. There are numerous carved scenes and each post has a character figure or an animal. The themes are either religious or mythical on the one hand or vulgar and profane on the other.

The religious subjects include the Virgin Mary and the Angel of the Annunciation, the Pelican (symbol of the Resurrection) and Saint Michael or Saint George slaying the dragon. Then you have the lovers, the flute players and a selection of fantastical creatures. All of this was once painted in bright lifelike colours, but any remaining original paintwork disappeared with a major remodelling in 1814.