Out Hunting in the Forest

The other day we were driving through the Forest of Amboise, between Chenonceau and Amboise, and a large black and tan hound came lolloping down the road towards us. He was on his own and as cars spotted him they slowed down. He came right up to the car going in the opposite direction to us, and then right up to us. He seemed to be checking the occupants and hoping to see someone he knew. We drove slowly and reluctantly past him (we couldn't have fitted him in the car even if we'd wanted to pick him up). 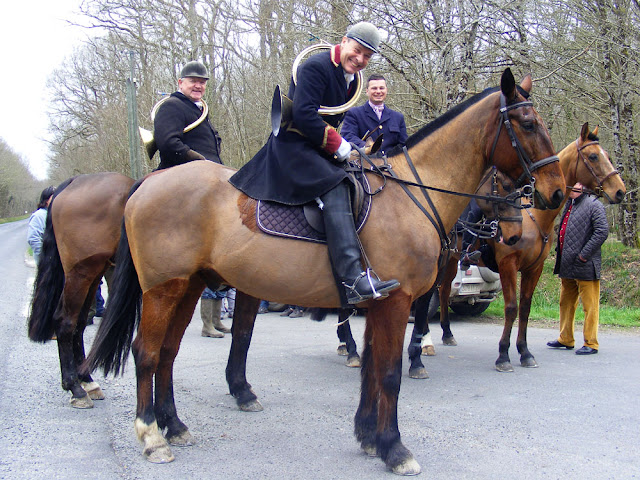 A bit further down the road we came across a group of chaps with cameras and binoculars. We drove past them, thinking they were birdwatchers on an outing, but soon we encountered a group of mounted hunters. That was who we were looking for, as we realised they must own the dog (and in fact, the chaps with cameras must have been hunt followers).

We pulled up and I jumped out to tell them about the dog. They thanked me and said they would send someone to fetch the errant beast, who had obviously got separated from the rest of the pack.

Then I asked them if I could take a photo and they agreed. The jocularity I captured was because there was some banter about whether I wanted to photograph the young and handsome members of the group or the old experienced hands.

The horses have all been clipped because they get too hot otherwise in their fuzzy winter coats. Riders generally like to clip horses if they are going to be working because if they get sweaty it takes them a long time to dry off so they can end up first too hot and then cold and wet. Also at this time of year they will pick up quite a lot of mud and if their hair is long it will get matted and be more work to groom.

poor dog could have been hit.....hounds are frequently lost in the woods around us...I hate hunting

We were concerned it could have been hit, but all the cars we saw were flashing their lights madly to warn others and slowing right down to a crawl. I imagine it survived and was picked up by one of the kennel men.