My favorite metro station in Paris isn't the station nearest my favorite place in Paris, it's a destination in itself.

Passy Station opened in 1903 as the temporary terminus of line 2 Sud from Étoile (the Arc de Triomphe). Once the viaduct above the Pont de Passy (now pont de Bir Hakeim) was opened the line was extended to complete the southern half of Paris' equivalent of London's Circle Line (the yellow one). For most of its length south of the river the train runs on a metal viaduct built in the middle of the line of the wall of the Ferme Générale - not a defensive wall, but a wall built to make sure people paid the taxes due on stuff imported into Paris - which was demolished in the 1860s.

This isn't why I like Passy station though. I like it because the train emerges from a tunnel onto a viaduct above a road bridge, and the views are excellent.


Without knowledge of Paris you would be hard pressed to believe that the station
in the middle of the photo (Bir Hakeim) is the other side of the river. 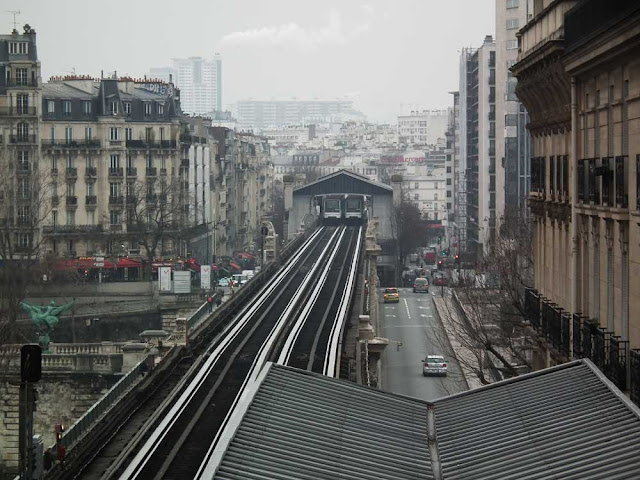 See the car just above the station canopy in the above photo?
If you stand there this is the view you get of Passy station (just below that red light) 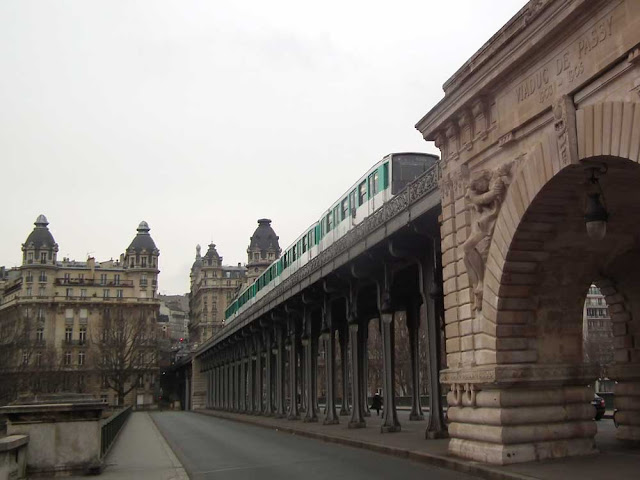 The train emerging from the tunnel. Line 6 is one of the
metro lines where the trains run on rubber tyres. 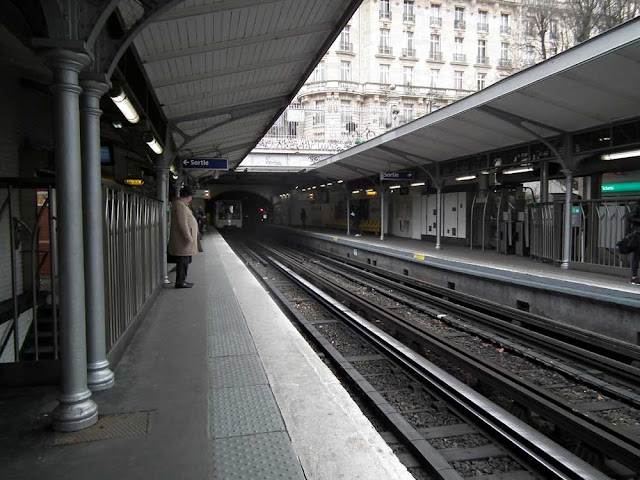 And the view. Even through a dirty metro train window on a foggy day, it's OK 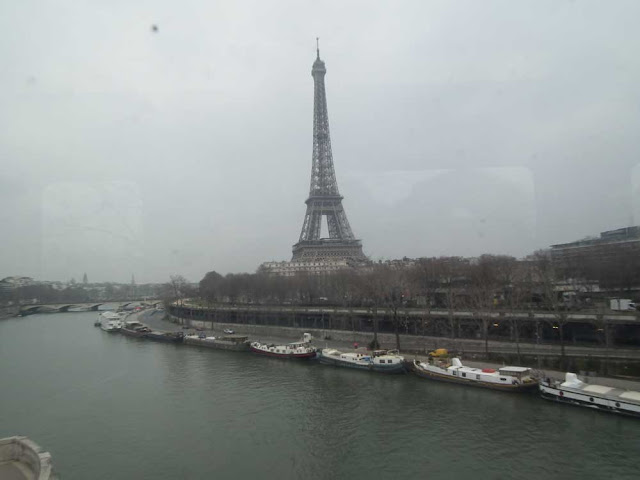 There are many old views of Passy Metro station here
Posted by Simon at 09:00

Are there any lines where the trains do not run on rubber tires these days? I remember when the old-style, wooden cars on steel wheels were phased out.

Oops, ignore my comment. Only a few Paris metro lines use trains on rubber tires. I guess I don't take the metro as often as I used to, since I prefer buses or just walking.

that was "my" metro stop the year I lived in Paris...right around the corner from this on Blvd Delessert....

IIRC the first time tires were used on metro trains was on those running on the then line Châtelet-Pré Saint-Gervais. That was sixty years ago

The angle of the first photo is very strange. I can make out the left side of the tracks, with the green statue by the Danish sculptor Holger Wederkinch, supposedly of Jeanne d'Arc, but called La France renaissante, on the middle of the viaduct, across from the Île des Cygnes. Above the statue, on the left bank of the river, those buildings are next to the Australian embassy.

But the right side doesn't make sense since the building on the side of the Passy metro station looks as though it sits on said île des Cygnes across from Jeanne d'Arc. Strange!

If you click on the photo and view it full sized you can just see the stairs down to île des Cygnes (near the back of the car you can see).

All the tall white building on the right hand side are the other side of the river. The reason the building to the right of Passy Metro look off is because they sit on a terrace above the river, and you can't see either Avenue du President Kennedy or Voie Georges Pompidou because they are hidden by the canopy of the station. The balconies on the building on the right are on the 4th floor (european)https://goo.gl/maps/YWMNuWcuCGN2

Are you going to tell us what is your favourite place in Paris??
We had a lovely walk from the André Citroen park all along the Île des Cygnes past the statue of liberty and the peculiar Jeanne d'Arc and up onto the bridge. Then onwards through the Champ de Mars and the back of the Invalides. Not sure if we made it to the Rodin to rest in the green quiet garden that day. We passed some pretty odd and interesting high rises along the river. It was a good day.
Jocelyn