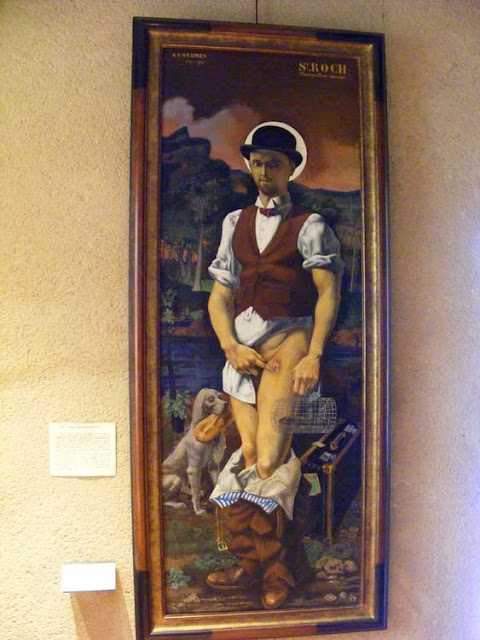 After weeks of posting about the wonderful Musée de l'Hospice Saint Roch, here at last, is the pilgrim's saint himself. Not quite how you were imagining him though, I'll bet.

This extraordinary painting of Saint Roch is by Alfred Courmes (1898 - 1993). It is oil on canvas and was painted over a period of four decades in the mid-20th century. It now hangs by the door as you leave the pharmacy. Apothecaries are on the list of people Saint Roch protects, along with pilgrims, invalids, surgeons, those caught up in epidemics and those with skin diseases.

The Surrealist artist Alfred Courmes is now largely forgotten. Although genuinely spiritual and devoted to the historical and mythological subjects painted by the Old Masters, his highly individual take consistently reinterpreted their chosen themes. His images are at once shockingly graphic and touchingly beautiful, a fantasy world where religion is wittily subverted, often with recognisable elements of contemporary advertising imagery.

Part of an unfinished folding screen, his Saint Roch should include two other elements: a Saint Sebastian (now in the Pompidou Centre) and a Holy Family that was never finished. His Saint Roch, sketched in 1936 and completed in 1977 keeps the traditional attributes of the patron saint of plague victims, even though Courmes can't resist updating and twisting the iconography, demonstrating a wicked irony and rebellious spirit that distinguishes his quirky approach.
Posted by Susan at 09:00

It's a really startling image, especially when you come across it unexpectedly like I did. I thought it was brilliant.